Earlier this year at the D23 Expo, guests who were present at the Walt Disney Studios live-action films presentation were bombarded with the upcoming slate of Disney movies. Among them was a live-action title that really didn’t catch their radar, but was different from the others nonetheless. 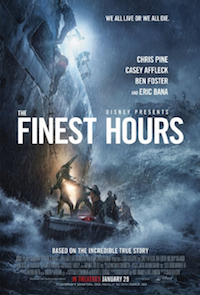 “The Finest Hours” is based on a true story that recounts the tale of a daring rescue mission that is emblematic to the history of the United States Coast Guard back in 1952. The film stars Chris Pine (“Star Trek Into Darkness”), who plays Coast Guard Captain Bernie Webber, and Casey Affleck (“Interstellar”) who plays Ray Sybert, the senior officer of the downed vessel that Pine’s character has to rescue in a humble wooden lifeboat in one of the East Coasts biggest storms.

While the “convincing story test” is usually how Disney tests its films in the greenlighting process, this film was unique in that it didn’t just have a good story. It was a live-action hero film. The official synopsis of the film calls it a heroic action-thriller” and from the exclusive footage we saw at the D23 Expo, it very much was.

I was personally drawn into the film because of this “new” genre that the Walt Disney Studios seems to be headed towards. For the past 3 years, we’ve seen many animated or storybook films that automatically make them Disney. Even the live-action slate has been filled with Marvel and now Lucasfilm titles that aren’t true originals. It’s in between those two things that “The Finest Hours” is set to make its mark; an original, true story that’s heroic and thrilling, yet emotional and telling.

Directed by Craig Gillespie, “The Finest Hours” comes to theaters on January 29, 2016.