Just yesterday night, Jimmy Kimmel hosted the cast of “Star Wars: The Force Awakens” on his show to tease a very small scene from the film, which is just a few weeks away from release.

Tonight, Kimmel continued the promotion circuit of Disney’s biggest franchises by hosting Robert Downey Jr. and Chris Evans aka Iron Man and Captain America. They were there to promote their upcoming film “Captain America: Civil War”.

The next Marvel movie and the third installment of the Captain America films is set to debut next May, but RDJ and Evans were kind enough to share the first two new posters from the film, as well as the first full trailer. For fans who know the comic story, you’ll be happy to know that the two are very much at war. For fans who just love Marvel movie action, you’ll be happy to know that there’s lots of it.

The trailer also confirms that we’ll be seeing some of the other Avengers, as well as some new characters, in the film; as was previously rumored.

As for how both those things will affect Cap and Iron Man, don’t hold your breath. There are many months before the film’s release (and a Star Wars film to boot)! Hopefully the posters and trailer things satisfy your hunger way past Thanksgiving. 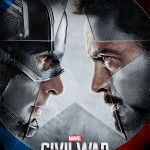 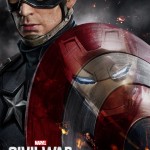