This review is written by our good friend Tony Sherg, who can be found sharing more about film on the Reel Talk podcast. Thanks for sharing your thoughts, Tony!

In a world where dinosaurs never became extinct and humans roam the wild, “The Good Dinosaur” features a simple, coming of age story with endearing characters and breathtaking visuals. As the 16th blockbuster release from Pixar Animation Studios, “Dino” succeeds in creating a believable and relatable story – however the film has the misfortune of falling short of June’s practically perfect “Inside Out”.

In a world where sequels are more common than ever, it is such a breath of fresh air to see a studio creating new and original content that relates to every generation. Complex, human experiences that every one of us goes through are symbolically expressed in the experiences the main character Arlo has, and the characters he meets along the way. 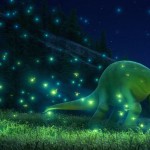 Arlo (Raymond Ochoa) a fearful and uncoordinated 11 year-old Apatosaurus is the youngest member of his family. He is constantly being overshadowed by his two older siblings, Lily (Maleah Padilla) & Buck (Marcus Scribner) and their ability to complete tasks given by their parents. As Arlo’s two siblings easily find ways to make their mark amongst the family, Arlo’s constant fear of the world around him limits his abilities to make his. Arlo, like many of us is struggling with finding himself and discovering his purpose in life. By the end of the first act, the story takes off on a breathtaking and passionate journey of personal discovery and the hard work, determination and courage it takes to get there.

On that road to self discovery, Arlo becomes acquaintances with an unlikely, ravenous human boy named Spot. At first, the two are enemies, but through an exchange of very minimal dialogue (perhaps the least amount of words spoken in a Pixar film ever), their relationship soon grows into a mutual dependence on each other which drives the plot through to the second act. 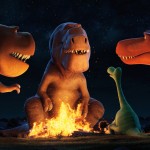 Of the few encounters Arlo & Spot have on their journey back home, the most enjoyable to watch for me were the family of longhorn herding Tyrannosaurs named Butch (Sam Elliot) Ramsey (Anna Paquin) and Nash (AJ Buckley). These wild west cowboy inspired characters guide Arlo & Spot to their final destination as well as add in some valuable wisdom that only the biggest and baddest dinosaurs could have. A particular favorite moment of mine was seeing the T-Rexs “gallop” across the great North American plains. The animators nailed the blend of making the massive creatures appear to be riding horses all the while containing that famous cowboy posture as seen in classic western films. Definitely an iconic moment.

Personally, the characters are truly what made “The Good Dinosaur” so enjoyable for me. Arlo is unbelievably entertaining due to his nervous antics and highly emotive facial expressions. If you think 11 year-old Arlo is adorable, wait till you first get to see him hatch in the film’s opening sequence (there were quite an amount of squeals coming from the audience during this part). His human acquaintance Spot, although aggressive and intelligent, is simply equally adorable to watch. Their unlikely friendship switches the traditional roles in a “boy and his dog” type story and allows for an unlimited supply of gags and situational comedy that had me laughing out loud. 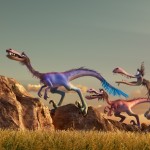 I went into seeing “The Good Dinosaur” knowing that this was going to be a heartfelt, emotional journey featuring one of my favorite subjects: dinosaurs. All of the creatures in this movie were a joy to watch and were animated in a way that I had never seen before. Arlo specifically reminded me of a young Bambi learning how to ice skate at times.

However, this is also one of my biggest gripes with the film. There were simply not enough characters involved in the story. Usually this is something more films need to strive for, however the lack of characters in “Dino” never made me the feel that the stakes were as high as they could have been.

Although the movie had an original story that pulled emotions from some of the most successful Disney films of all time, I couldn’t help but feel that the movie was too simple. The story is relatable and original which makes me want to say “I loved it”, however there was a lack of weight to much of the plot points and unfortunately that is what Pixar is most famously known for. Critiques aside, “The Good Dinosaur” is a film that audiences of all ages can enjoy together over the holiday weekend. The comedy is genuine and sweet, the characters are lovable and visuals are truly groundbreaking.