“Sanjay’s Super Team” is the Pixar animated short film that will accompany The Good Dinosaur, which is playing in theaters nationwide today! While this short has just premiered in theaters, it was first shown in June at the Annecy International Animated Film Festival in France. Inspired by Director Sanjay Patel’s own childhood, the short has now made the Oscar shortlist for Best Animated Short Film. This level of critical acclaim is inspiring for a short that sought to bring a story about a second-generation immigrant to the “pop culture zeitgeist.” At the press junket for The Good Dinosaur, Patel and producer Nicole Grindle explained the deliberate stylistic decisions they made in painting this identity of a second-generation immigrant as well as the purpose for why the film was created.

The short film follows a young Indian-American boy “Little Sanjay” whose ritual of watching cartoons is interrupted by his father’s ritual of meditating before a shrine. When he is forced to join his father in meditation, he daydreams and fantasizes his father’s Hindu gods as his favorite cartoon superheroes.

The premise of the story is based on a juxtaposition–the modern world of American pop culture versus the traditional world of Hindu religious practices and Indian immigrant culture. This young Indian boy “Little Sanjay” is a manifestation of Patel’s own struggles as he is caught between preserving his Indian identity and assimilating to the dominant American culture. “Sanjay’s Super Team” captures the struggle of many second-generation immigrants and essentially being torn between two identities and having to reconcile those differences. 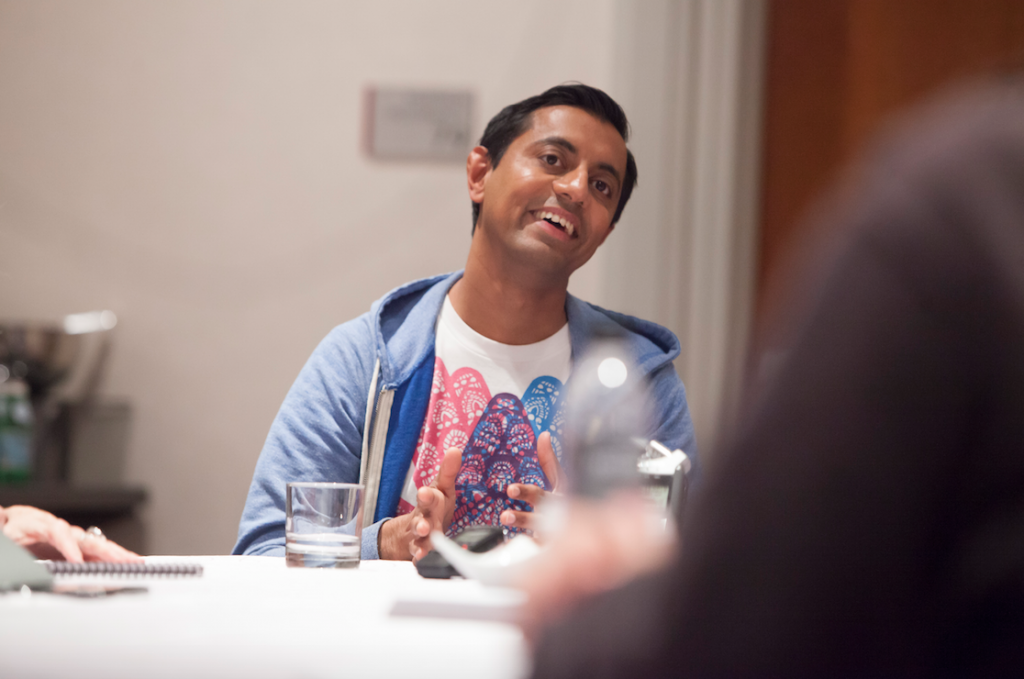 “Our worlds were diametrically apart. I just wanted my name to be Travis, not Sanjay,” said Patel.

Stylistically, Patel and producer Nicole Grindle made many deliberate choices to paint this identity of a second-generation immigrant growing up in a family of Indian immigrants. The home environment was designed to be sparse and drab with limited furniture. 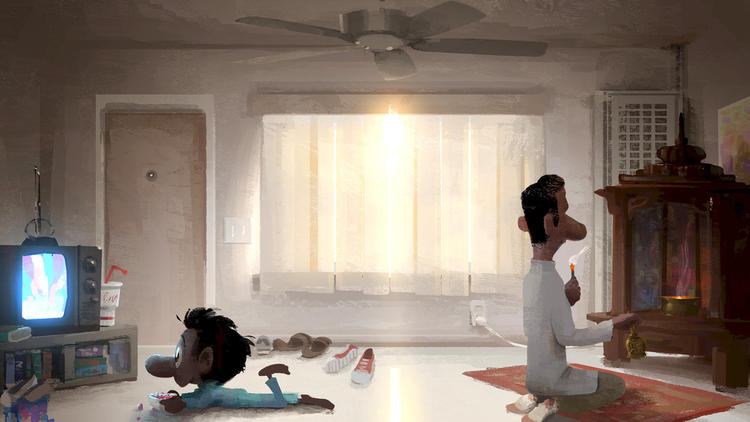 This is an immigrant [family] that left all of that ethno-stuff back in the home country, and they got nothing here in some part of Southern California,” says Patel.  “I just thought that choice was really, really important to me and the artists that we were explaining this to, they got it instantly.  Especially the immigrants.  They were like, “Oh, I had apartment like that, we got it.”  There is just no sensory — like, nothing in here.  And it really creates a vacuum.  So, imagine if there’s a big-screen TV in here, playing awesome cartoons.  Of course this kid’s gonna escape into that world, because his home is just this beige-on-beige box, without detail, without color, without any kind of interest.  We save all of that for when he wakes up in his daydream — that’s the payoff.  And that’s also the truth of most immigrants.  The truth of my parents’ experience as well. 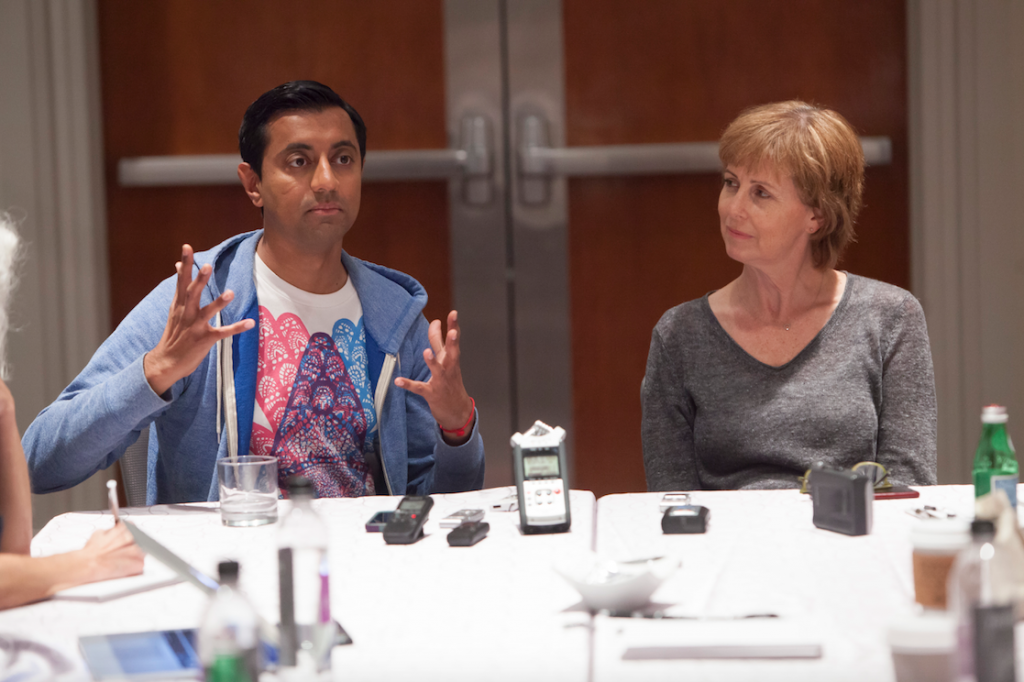 Grindle explains that the room itself is divided into east and west, with his father being on the east and Sanjay being on the west. Both sides are symmetrical with the box TV set and the box shrine and each with a carpet they sit on. In the reality setting, there are a lot of square motifs, but in the daydream setting, the motif is a circular temple with much more dynamic and vivid sensory images.

“The whole shape-language that this thing was based on, the mandala’s sort of principle is a square in a circle, and so it’s only when the two things unite at the very end, we find this sort of harmony,” said Grindle. 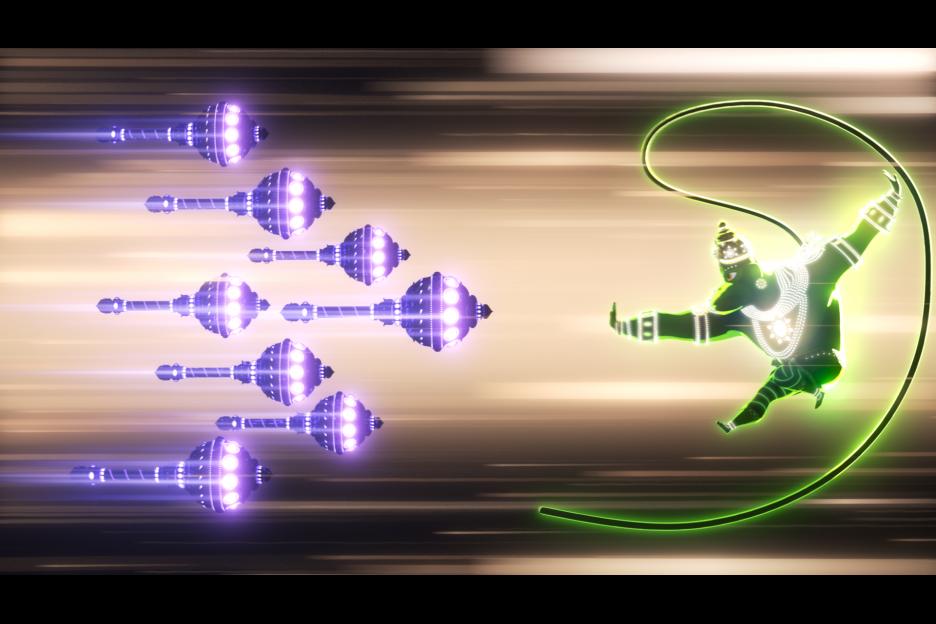 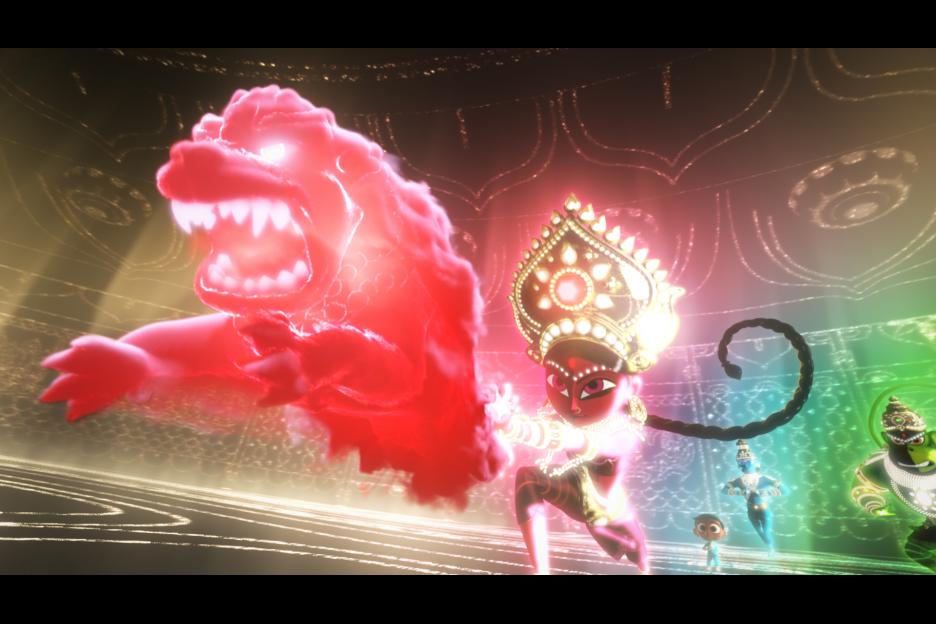 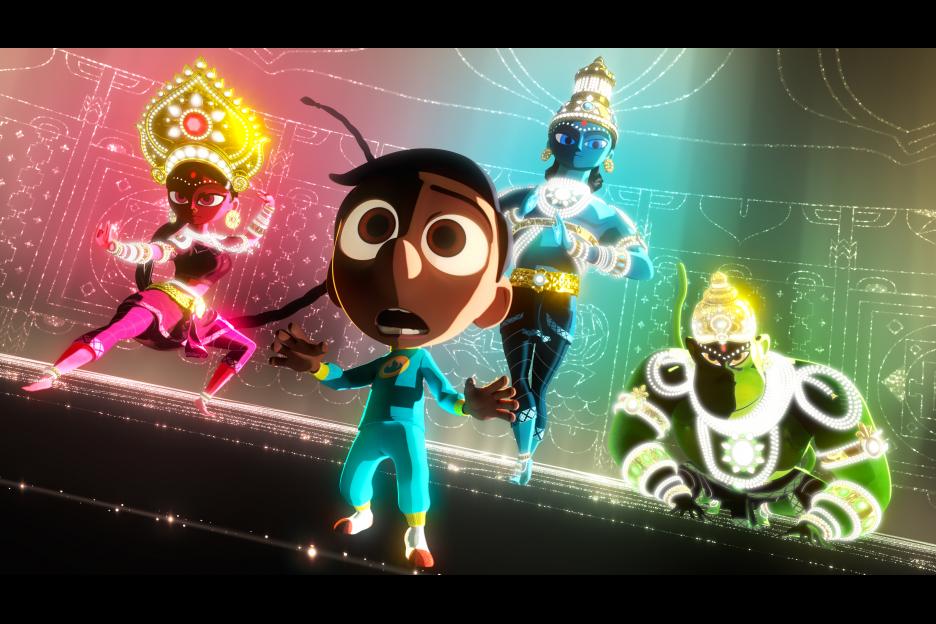 The daydream is where much of the enthralling action and stylized imagery takes place. The animation in this sequence was inspired from cartoons Patel grew up watching during the 80s and 90s such as Samurai Jack. In order to achieve an epic comic book superhero aesthetic the production team used low camera angles and unprecedented wide-camera angles (at least for a Pixar film).

With shows like Aziz Ansari’s Master of None, which is gaining traction for tackling issues such as race in Hollywood, “Sanjay’s Super Team” is contributing to a trend of telling stories about all walks of life and identities and bringing them into the mainstream. As a long-time animator for Pixar with no intentions of ever directing, “Sanjay’s Super Team” marks Patel’s directorial debut. At the press junket for the Good Dinosaur, Patel explained the reason why he chose this film:

When you don’t see any reflection of you, or your community, or your parents on TV, or in pop culture, other than a show, you just kind of figure out a way to exclude yourself.  Or you’re suddenly told that you’re just — you’re not important.  You don’t matter.  It’s awesome that Aziz has his show.  It’s awesome that I’ve seen tons of like, good momentum in that direction, and I get so inspired by that.  This is the number one reason I wanted to make this short.  I have nieces and nephews, and I wanted — I mean, I make all this great stuff for Pixar, but they were never going to get stuff that had any reflection from — that looked like their families, and so the second I had this opportunity, that was the purpose for me. It’s sort of to show this family that people might not otherwise see, and have it written and directed by somebody who knew that experience first-hand versus somebody who’s making it up.

When Patel first pitched this story of a young boy and his father to Jon Lasseter, he said “That’s great. Tell that story.”

Although this short is ground-breaking for Pixar in terms of media representation the themes remain as universal as ever.

MORE: How Sanjay’s Super Team will help you appreciate your childhood.