Two years ago today, the Academy Award-winning Disney’s Frozen was released. Since then, fans have had a world filled with Frozen. From Olaf’s Snow Fest and entertainment at the Disneyland Resort to the ‘Frozen Fever‘ short that debuted earlier this year. But for the first time ever, friends from Arendelle will be coming to Southern California in a live production to tell the magical story on ice.

In Disney On Ice presents Frozen, Jeremie Boisier skates as a citizen of Arendelle. What is it like to be skating in the Arendelle Kingdom with Anna and Elsa? What’s the best part of the show? We get the details from the skater himself: 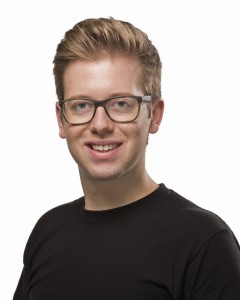 When did you start skating?

What made you want to pursue skating?

I competed for a long time. I competed until I was 19 and then I stopped and I went to school. I tried to work in other places — restaurants and all this stuff and I really missed skating so that’s why I came back to Disney On Ice because I missed skating so much.

How does it feel to be a part of the Disney company?

For a skater, Disney On Ice is really a major achievement.  It’s something that we look up to — all the figure skaters, shows, and everything. So I never really thought I would join Disney On Ice. I just tried and auditioned and I got it. And it’s just a blessing to be a part of. It’s such a great company and such a great show.

How does it feel being a part of one of the biggest Disney films right now?

Well…Frozen is everywhere. In my country [since] I’m Canadian, we have Frozen everywhere, but I didn’t know it was that big. I really realized it with touring with that show. It’s crazy to see all the little girls and the little boys all dressed up as Anna and Elsa, Olaf, and Kristoff in the audience every night. They all sing along to every song of the show. It’s really really great.

What’s your favorite part of the show?

Olaf’s entrance. The first time he appears in the act is just hilarious and everybody loves Olaf. He’s everyone’s favorite and it’s always a big big reaction for the crowd when he shows up for the first time. I like that moment a lot. Everybody screams and laugh. It’s great.

What is the process for prepping for each show?

We do have a warm–up. We all come together and we all do warm–ups together on music. And then it’s everyone and their own time like 15-20 minutes to just apply make–up, get your skates on and everything, listen to your own music, and that’s where we go. We always come as a team before every show.

Is it difficult to skate with a costume?

No. We have great costumes. The wardrobe department is amazing as well. They’re designed for figure skaters so it’s totally fine.

What other Disney character would be fun to perform as on ice?

Of course, all the princes because you get to skate with the princesses. It’s pretty fun. So for a guy to do a prince means a lot. Apart from that I’m always up for anything. I like trying different things so anything they would ask me to do, I would do it because it’s fun. Playing new characters and new ways to skate. Pretty much anything.

Why should people see that show?

We’re Frozen. So I don’t have much to say to convince people to come. It’s such a great story. It’s so different and all the songs are amazing in the movie. We take everything that was in the movie and put it on the ice, live-action. And Frozen is a story about the cold, the ice, the snow, and everything, but I think we do an amazing job doing it on ice.

Mickey and Minnie along with special guests host the show so be sure you keep your eyes out for other Disney character favorites. You can even catch Jeremie playing one of his favorite characters, Buzz Lightyear in these segments.

Disney On Ice will be playing in Southern California on the following days:

For tickets and more, visit www.disneyonice.com.