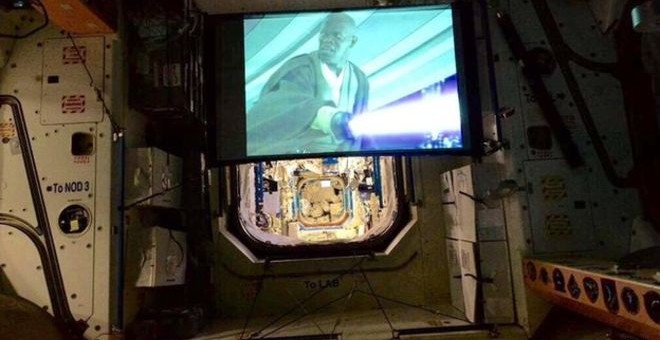 Space is a rather lonely and sometimes boring place, according to some astronauts. Hollywood has given us an image that it is a place of adventure and excitement, but that is certainly not the case when real astronauts want entertainment.

For those astronauts aboard the International Space Station, their entertainment levels will be exceeded in full as Disney has agreed to show Star Wars: The Force Awakens to them! The latest Lucasfilm movie will be screened in full to those aboard, including British astronaut Tim Peake.

.@ChrisEastabrook We have a projector & screen onboard & I'm told that @starwars will be waiting for us up there…what a place to watch it!

There’s no word on when the film will beam up to the astronauts, but we’re expecting they’ll watch it on its release day like the rest of us on earth. They will have an advantage to watching it in zero gravity though.

They’ll be far, far away from any spoilers.