In addition to being a Disney enthusiast, I’m a businessperson. I love being able to look at other businesses (including mine here with DisneyExaminer) and see how they operate. Obviously, I’ve been watching The Walt Disney Company very closely and have found much to admire more than despise about the Company.

The reason why, as a businessman, is because it’s incredibly successful in a variety of things. The revenue numbers are telling of that success, but why is the money pouring in? Why is Disney creating and reaping the benefits of its creations?

It’s all in their business model, laid out by Walt Disney and now being maintained by Disney’s current CEO Bob Iger. 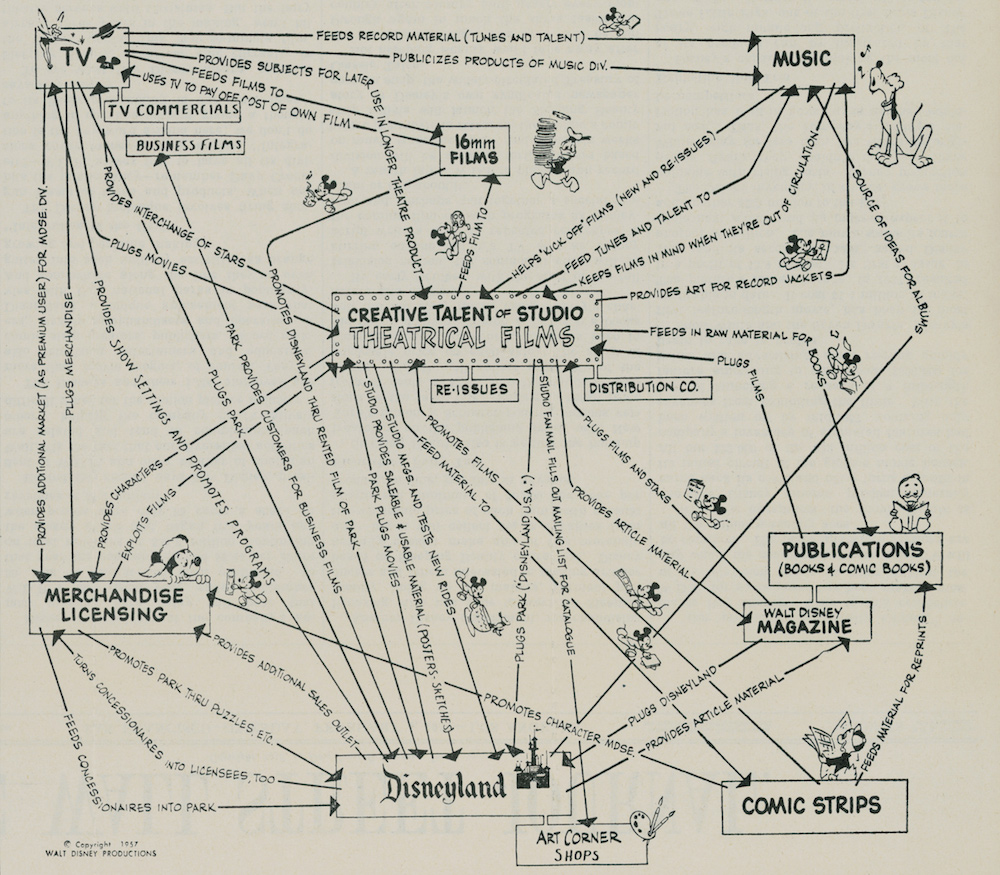 Walt’s creation of Mickey Mouse and all the other characters and worlds he created was the seed through which other products would grow. Mickey Mouse plushes and later Mickey Mouse meet-and-greets at Disneyland were just some of those products that raked in additional money beyond movie ticket sales.

This reliance in creating top-quality movie products to then spinoff into more products was lost in the middle of Disney’s 90-year existence. It was then the top priority of then newly crowned CEO Iger to restore this evergreen entertainment business model.

Since taking the reigns in 2005, Iger has taken a different approach to accomplish the task with purchasing some of the biggest entertainment products in recent history. With Disney’s Board of Directors’ approval, Iger lead the purchases of Pixar ($7.4 billion), Marvel ($4.0 billion), and most recently Lucasfilm ($4.1 billion). These other movie studios have created iconic characters and worlds like Woody, Buzz, Captain America, and Luke Skywalker. Each of these multi-generational characters have reached the height of popularity similar to Mickey Mouse, which signaled Iger to make those purchases and put them through the Walt Disney-model of business.

The results are a nearly 300% increase in Disney’s stock price with more growth expected.

That’s due in part from Iger realizing the larger costs Disney can now avoid to create some great entertainment products. More importantly is another aspect of Iger’s take on Walt Disney’s business model: allowing these purchased and in-house studios to create more with their existing canon of characters and make new ones to tell even more stories. By openly allowing these storytellers to create without little to no creative constrains per Iger’s orders, new movies like Star Wars: The Force Awakens have and will be created to bring in more revenue.

The strategy and immense risks with these expensive purchases seem to have paid off already. The perfect example is Episode 7 of the Star Wars franchise which has reached over $1 billion in box office sales in just two weeks of opening in theaters and over $5 billion expected in consumer product sales. We can’t forget about the two new Star Wars-themed lands coming in 2019 at Disney’s theme parks which will bring in even more money.

All those products together will pay off Lucasfilm’s original purchase price with the excess funding even more movies and resulting products that be revealed even this coming year! Pixar’s Finding Dory, Marvel’s Captain America: Civil War, and Lucasfilm’s Rogue One: A Star Wars Story are perfect examples of Walt’s business model still making the Company flourish in 2016.

Expect to buy the toys and visit the theme park attractions that’ll accompany those movies, too.