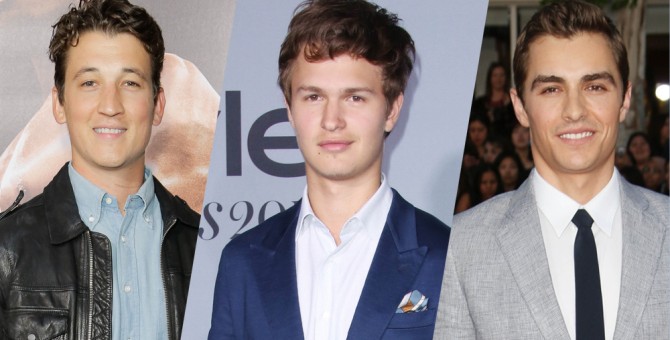 As was confirmed at the D23 Expo, we’ll be getting a new Star Wars standalone film that will chronicle the early days of the “best” pilot in the Lucasfilm galaxy: Han Solo.

The film, set to debut after Star Wars: Episode 8, is in the very early stages of pre-production, which includes finding the young star who will have the job of embodying such an iconic character. All forms of casting for films are usually kept a closely-guarded secret. And while secrecy was very much kept throughout the whole production process of Star Wars: The Force Awakens, it seems that secrecy can only last so long.

According to source reporting to Variety, “thousands of actors” have been seen and tested by Disney and Lucasfilm execs already. They have cut their list to a few dozen actors now, which include Miles Teller (“Whiplash”), Ansel Elgort (“The Fault In Our Stars”), Dave Franco (“Now You See Me”), Jack Reynor (“Transformers: Age of Extinction”), Scott Eastwood (“The Longest Ride”), Logan Lerman (“The Perks of Being a Wallflower”), Emory Cohen (FOX’s “Brooklyn” series), and Blake Jenner (“Everybody Wants Some”).

As with telling the early life story of the older Han Solo we know, Disney seems set at casting an actor who just doesn’t look young, but is young as well. Most of these actors noted above are between the ages of 20 to 25.

While Non-Disclosure Agreements and test deals are still being worked out, producer and Lucasfilm president Kathleen Kennedy and directors Phil Lord and Chris Miller (“The LEGO Movie”) will already test the final group.

A decision on who’ll play the young Solo will then be expected in the next few weeks, says the Variety source.

The untitled Han Solo film won’t begin filming until next January, but sources close to the situation say the reason for such an early decision has more to do with another “Star Wars” film currently shooting, rather than the untitled “Han Solo” pic. While insiders were unable to confirm, the new Solo could have a small cameo in “Rogue One: A Star Wars” before appearing in his own standalone pic. It’s similar to Marvel’s strategy with casting their new cinematic Spider-Man early for him to appear in “Captain America: Civil War” later this year.

Whoever they cast, we’re praying for them. They’ll have the burden of a lifetime trying to embody the work of an icon.