E-sports is a growing industry. According to the Los Angels Times, it has earned over $500 million over the past few years in revenue. With this growing popularity, ESPN now sees the need to cover e-sports as one of the main pillars of is vast coverage empire.

If you take a look at ESPN’s website now, it has a section dedicated to the coverage of e-sports. With this new section, ESPN has started covering the competitive leagues of Hearthstone, DOTA 2, and League of Legends. In addition to online coverage, EPSN will also cover e-sports news on SportsCenter like they would any other type of sport. In addition to their coverage about e-sports, ESPN is also considering hosting live events. However, they have not said how they are going to do that. They are considering going with the more traditional route of broadcasting them live on TV and/or  broadcasting them live on the popular streaming service Twitch.

It is interesting to see the sports giant enter in this field because of the growing popularity of e-sports. ESPN is a powerful brand in the sports world and to see them enter into covering e-sports is a big deal. It gives e-sports more legitimacy as a form of professional competition. Additionally, it is a shrewd move by ESPN because this gives the sports network more appeal to an audience they have not reached before. People have the same passion for e-sports as they would with a more traditional sport. This is just one step closer to getting e-sports fully accepted into the mainstream. 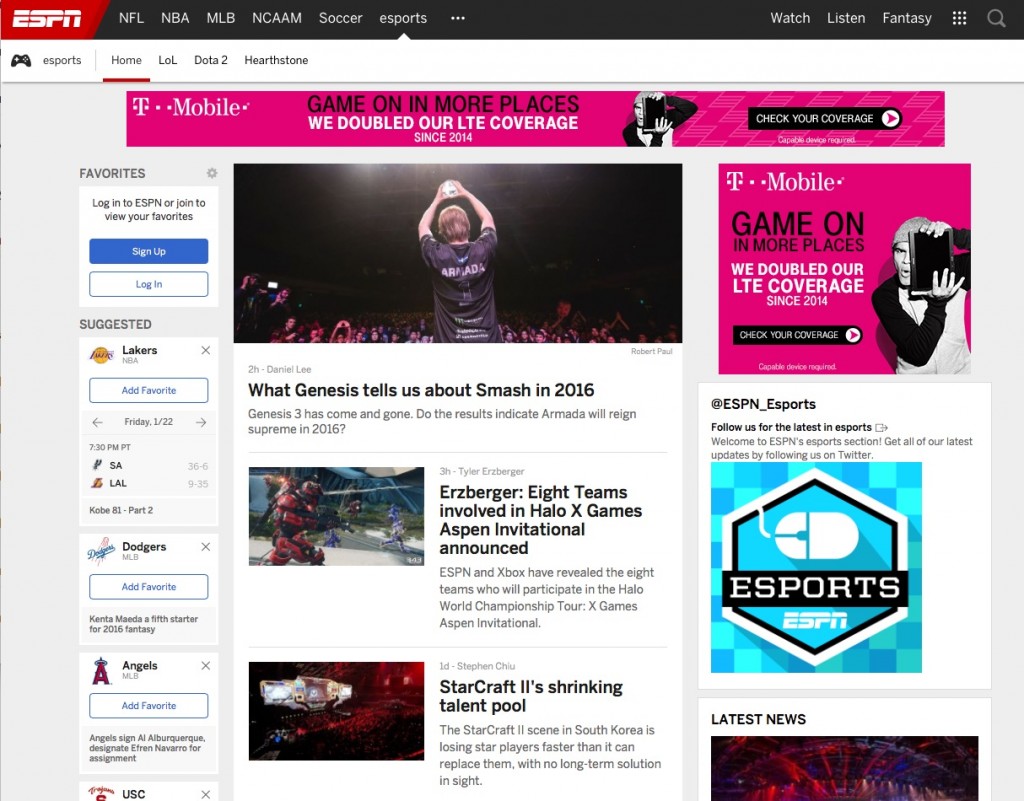 I am in favor this move by ESPN because e-sports isn’t a fad that is going to go away soon. It does take a lot of skill and training to play any game like Super Smash Bros at a competitive level. Watching people play videos games at a very high level is very exciting. I would rather watch a competitive Super Smash Bros. tourney over a vast majority of traditional sporting events. Seeing people play a video game you enjoy at a high level is thrilling. It is just like watching any other sport because the amount of skill, knowledge of strategy of the game, and the level of competitiveness rivals any other sport.

I do find it somewhat off-putting that they are including it the same breath as more athletic sports like baseball, football, and hockey. I don’t think e-sports are on the same level as a more athletic sport because it lacks any psychical feats. Athletes endure rigorous training to prep their bodies to get them in pristine condition so that they can go faster and be stronger than their foes. E-sports on the other hand, does not really require physical training to become great at it.

If one dedicates to many hours to it then it is more likely that person will be less active psychically. This can lead to health problems such as obesity. As you all know, the United States struggles with obesity. According to the National Institute of Health, 1 in 3 adolescents are overweight or obese. Having e-sports on the same pedestal as Basketball or Soccer and calling it a sport may send children the wrong message.

I am an avid gamer and love video games dearly but being the best Star Craft 2 player is not on the same level as the accomplishments of sporting greats such as Payton Manning, Clayton Kershaw, or LeBron James.