Whenever people want to look for Disney-related news today, there are many different outlets to look at online. Stories are not only delivered through news sites now. Independent bloggers, Instagram users and Twitter users have also become sources of Disney-related news. But as the internet and journalism continues to shift into an age of social media, it is important to look back on the history of Disney journalism and examine how it evolved into its current state today.

Before social media took on a huge role in news reporting, websites such as MouseInfo covered Disney-related news. It was started in 1999 by Michael McSparran. In 2008, he gave the site over to his friend Becca Blumenfeld, who was a user on MouseInfo since 2005. Blumenfeld said that in the past, a trip to the Disney parks once a month and an update on the site once a month was sufficient. But with the emergence of social media websites and apps such as Twitter and Instagram, reporters need to visit the parks several times a week to keep up with constant breaking news. The news today is all about “right now, right this instant.” 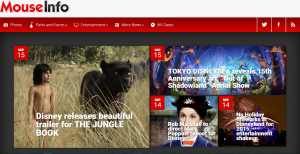 Unfortunately, with the pressure of being the first to break the news, sometimes the wrong information is printed. The Orange County Register’s multimedia reporter Mark Eades thinks that the Disney journalism scene is very congested. It makes the scene prone to rumors because some writers do not verify their facts.

Eades worked for Disney for 21 years before pursuing a career in journalism. He spent 11 of those years in Disney as an Imagineer. He warns that writers should always talk to official Disney representatives to verify information instead of relying on cast member rumors. According to Eades, sometimes cast members or Imagineers try to push their own agenda on what should be in the Disney theme parks, or they try to claim more credit on things than they really needed.

He also feels that some print journalists have a difficult time adjusting to writing for the web. He doesn’t believe in long stories for the web.

“What is your subject? Write about that. Don’t be repetitive, and keep it short and tight. That’s writing for the web. And if it’s a visual story, do it visually,” Eades said.

In other words, if you can do a slide show, let the slide show tell the story. If you can show the story, film a video about it instead of writing about it.

At the same time, we can’t deny that we live in an age of easy access to researching and creating content. Jim Hill, owner of Jim Hill Media, has been involved with Disney journalism for 30 years. He currently writes for The Huffington Post. He has also witnessed how the industry has evolved throughout the years and thinks that’s a good and bad thing for the future of this type of journalism.

“When I started out, there were all these editors and publishers, and there were so many doors that you had to knock on, and you had to wait your turn. Now, thanks to the web, anybody can break through,” said Jim Hill.

The Emergence of Social Media

Today, people don’t necessarily have to write stories; they can simply interact through social media accounts. It is a short form way to deliver news.

And with the increased popularity of social media as a news outlet, Disney has turned its attention to these so called social media “influencers”. Along with the usual Disney news sites, the company has been inviting a group of people who can be referred to as “Social Media Moms” to attend events.

MouseInfo’s Blumenfeld thinks that Disney is turning to the Social Media Moms because they are very influential with other people. “They’re very likely to go back to their friends and say, ‘Hey this really works for me,’ or ‘Hey, my son or daughter really loves this show.’ They’re the ones that are driving the money, driving the traffic into Disney,” she said.

She believes that it is because of that reason that Disney is focusing all its energy on the Social Media Moms. “I feel like the websites that have been there since the very beginning are feeling brushed aside because of the stronger interest in these Mom Bloggers.”

However, Janice Brady of The Adult Side of Disney said, “Disney has always recognized and included mommy bloggers in everything; in all media invites and all Disney Social Media Moms Celebration invites. It has always been the majority non-Disney sites that receive the invites.”

Brady believes that Disney bloggers have the misunderstanding that this is something new. She said that non-Disney bloggers have always been the bulk of the invites because Disney is trying to expand its market. It is just more noticeable now that the Disney journalism industry is expanding.

“It’s just that when you become a Disney blogger, suddenly you think- oh, I’m getting rejected over regular mom bloggers. No, you’re not. They don’t need to tell you what’s going on. Supposedly you know what’s going on because you’re blogging about it,” Brady argued.

When Disney representatives were asked to respond to the debate, they declined to answer. 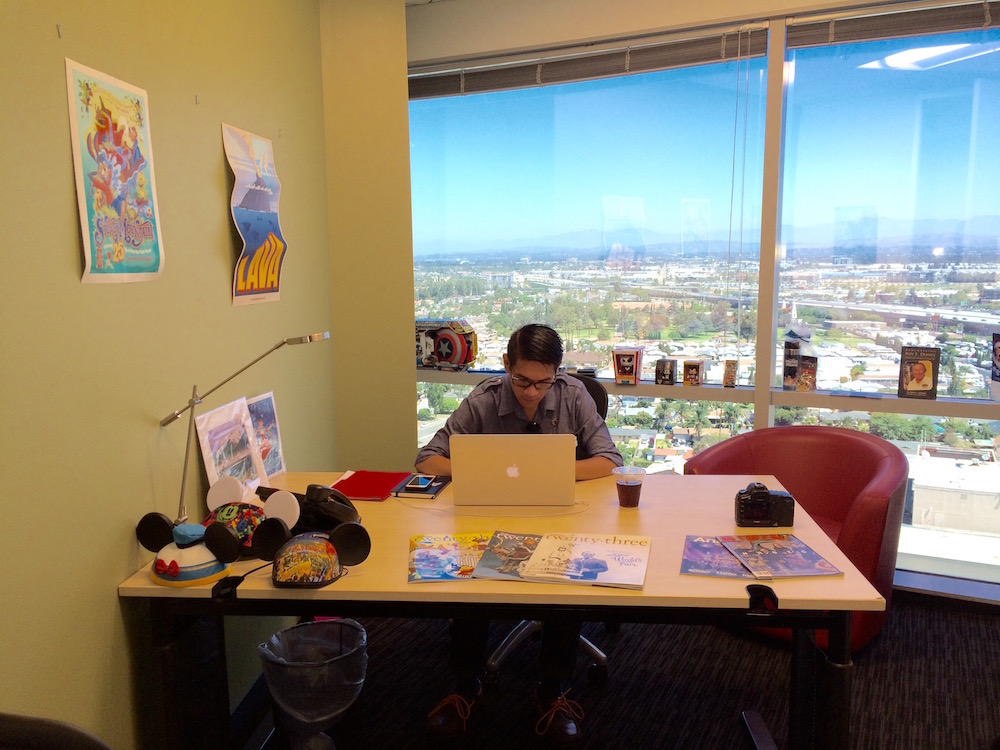 An office at DisneyExaminer’s HQ overlooking the Disneyland Resort in Anaheim, Calif.

Regardless of whether everyone supports social media as a means of receiving news, there is no denying that it has a presence in journalism. People will always be creating new blogs, Twitter handles and Instagram accounts to cover various parts of Disney’s vast business empire.

People on the receiving end of the Disney journalism must also have an active participation in choosing what outlets of information, formal and informal, will be their go-to sources. With an ever-growing supply exceeding the demand for Disney content, it remains important for Disney info seekers to carefully select where they get their news: follower count considered.

From starting out as print to shifting to the web and finally to social media, Disney journalism is constantly evolving and it is the industry’s job to adjust to the changes. Traditional journalists and social media users will need to learn to coexist in harmony, because in the end, the main goal is to research and report on the happenings of The Walt Disney Company.