The Dali Museum in St. Petersburg, Florida has a new exhibit titled, “Disney and Dali: Architects of Imagination,” which will run from January 23, 2016-June 12, 2016. The exhibit features “original paintings, story sketches, conceptual artwork, objects, correspondences, archival film, photographs, and audio” that illustrates the works and friendship of the two artists. The exhibit was previously shown at The Walt Disney Family Museum in San Francisco, California. 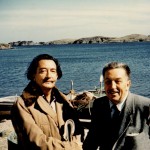 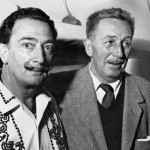 The Dali Museum is also offering an event on February 4th, presenting Destino and Disney and Dali: A Date with Destino. This short film is one that Dali commenced along with artist John Hench in 1945 for The Walt Disney Company. The painter and Disney artist worked on this project for eight months before  World War II, which placed the work on pause due to financial troubles. Nearly 60 years later in 2003, the film was finished after Roy Disney, Walt Disney’s nephew, discovered the project while working on Fantasia/2000. The short was featured on the Blu-ray release of Fantasia/2000.

Destino is in the style of Dali’s surrealist work, which includes music by Mexican composer Armando Dominguez. Disney described the film as a “simple love story – boy meets girl.”  However, Dali gave the simple love story a twist:

The animated short is a love story as only Dali could imagine it, complete with the images as only he could create – melting clocks, tuxedo-clad eyeballs without faces, ballerinas, ants that turn into bicycles, and surprising baseballs.

The accompanying documentary, Disney & Dali: A Date with Destino looks at the friendship between the two artists, exploring how Destino came to be after half a century.

As one was an eccentric Spanish surrealist painter, the other was an American visionary and entertainment pioneer.

The friendship between Disney and Dali was born out of the mutual admiration of two visionary artists and sustained by the simple kinship of two small town boys on a never-evening quest to broaden the horizons of art.

The impact of both can still be felt. Salvador Dali, the eccentric Spanish surrealist painter whose behavior, as well as creativity inspired a crater in Mars to be named after him. Disney’s impact continues to be felt through the giant entertainment company that encompasses theme parks, television programming, films, merchandise, and so much more. It’s as if their friendship was destined to be.