While most of us consume films as moviegoers, we might not think about what exactly we’re consuming. In fact, it’s entirely possible that we never think twice about the process or the forms of artistic expression that is created in creating a film.

Tracing back to its roots, feature animation was created by Walt Disney who had a desire to create feature length films using drawings. Thousands of drawings that when stitched together would give the illusion of motion. Think those flip books you used to make when you were bored in school.

While you might have thrown those flip books away, many of those sketches, animated cells, and other assets used in creating Disney animated films like Robin Hood and Tangled were kept. Actually, a lot of these and what people at Disney Animation like to call “art” pieces were kept that span the 90+ year history of the studio.

So where do you keep all of this priceless art? In a library, of course. A very secretive, protected, climate-controlled “library”.

Tucked away near Disney’s creative campus in Glendale, California is what they call that library: the Animation Research Library or ARL for short. Back when Walt Disney started it, he called it the Morgue. Contrary to its name, it wasn’t where those used art pieces were sent to die. Instead, it was a place where they could live on in a variety of ways.

It is home to over 6,500,000 pieces of art featuring many of the actual sketches used in creating Disney’s animated films and before that, shorts. They store all of the art in rooms that can only be accessed with the correct key card and are kept at a temperature of 61.5 degrees Fahrenheit, 50% humidity through a filtered air system that prevents dust from getting in. You can probably equate this level of detail and care to what a museum does to maintain their art pieces.

But the ARL isn’t a museum. It’s a library.

While the building and its valuables are closed off to the general public, access is granted to all the artists who currently work for the animation studio and other Disney artists from other segments of the Company like consumer products. The art that’s in ARL is catalogued like books in a library, where it can be found and looked at. Nothing has to be viewed through glass. It’s an opportunity of a lifetime for them made all in the name of research.

“It (ARL) has always been a place where our artists can come and take a look at the past,” said Fox Carney, the Manager of Research at ARL and who gave me and some international journalists a tour. “We hope that our rich collection of past art will inspire their future works of art.” 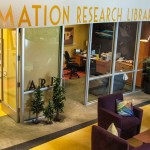 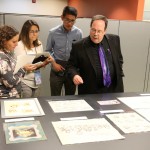 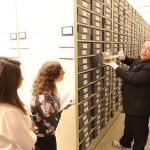 Inside one of the ARL vaults 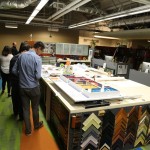 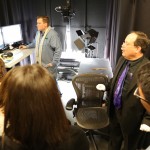 Carney proceeded to then give us a tour of the facility which is broken up into a few segments.

There’s a Collections area where art received by the ARL, both internally from Disney artists working on new projects and externally from private collectors, are processed carefully using white gloves and special tools for handling. It’s then off to the Motion Capture department where the art is digitally photographed so that it can be accessed online by artists via an application in a moment’s notice. Finally, it’s then moved to its place within the vaults until an artist wants to see them in person.

It was all really a spectacle for me. I do like art, but when combined with Disney, I couldn’t help by nerd out at all the amazing things that were around me.

Before I left, I asked Carney about the future of the ARL. One doesn’t have to think back too long ago when Disney CEO Bob Iger ordered that hand-drawn animation would no longer be created at Disney, so what sorts of art would continue to fill those vaults? When would it all be irrelevant?

He told me that relevancy would always be something that ARL will have. While not every single piece of Disney animation art will make it into the ARL for cost reasons with collectors to some art being unintentionally destroyed by past artists, that won’t affect the effect that the ARL has on today’s artists. And while Iger did give the order to stop the hand-drawn process, he also apparently was one of the original supporters of the creation of the facility because he and John Lasseter knew the value of their company’s past.

The Walt Disney Company is very much one that values its past. The ARL is just one example of how much Disney relies on its past to inspire its future. The art that is housed in it were proven successes in the world of entertainment. That success is what brings so many of today’s Disney artists to come see it for themselves in hopes that they, too would be inspired to create the a version of the same.