Adventureland is shrouded in excitement and mystery. There are things there that will baffle guests such as the corny jokes from the Jungle Cruise or how Indiana Jones always makes his escape from the Temple of the Forbidden Eye. All of these attractions have garnered much popularity, but there is a dark horse among them. Located inside the Adventureland Bazaar is the jungle’s only self–service witch doctor, Shrunken Ned. What makes visiting Shrunken Ned so great are the phrases he uses to diagnose our “illnesses”. Here are 5 hilarious diagnoses given by Shrunken Ned!

If you’ve got this disease, then you’ve also got no cure either because there is no disease!

The Zombie Say Make Me Sneezy

Uh oh, you’re going to need your head removed. The good news is you won’t miss it!

Congo Wongo Bongo fever is a serious illness. Head over to the Bengal Barbecue to grab some food and if that doesn’t work, visit a real doctor!

If you have Skitso-Titso, you’ve got split–personality disorder. Good for you and the other you!

Having a case of Buana-Pirahna Banana isn’t too serious. Well, serious isn’t the problem. The problem is that you’re too suggestible! Get a clue! Buck up and be yourself!

Aside from the corny jokes and split personality disorder, Shrunken Ned also gives out a piece of physical advice in the form of a card that can have anything from eating food without spilling, to not heed the advice found in health books. It’s different for everyone. 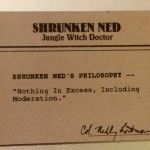 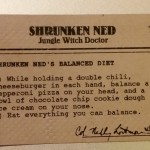 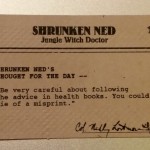 At fifty cents, we were able to get diagnosed five times, but I’m sure there’s plenty more. So the next time you’re in Adventureland, make sure to stop by the Bazaar and get diagnosed by Shrunken Ned. You won’t regret it and might even bring Ned a couple more “patients” wanting to hear their diagnosis after yours. Thank you so much for patronizing DisneyExaminer as your number one stop for Disney News!