By now, you all probably know about the below iconic image. 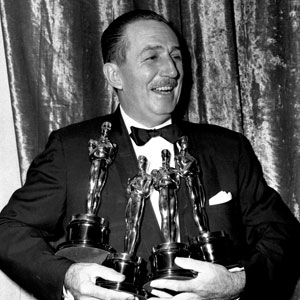 Walt Disney is still the only person to have the most Academy Award wins in history and he has received the equally iconic Oscar statuettes for every single one of them. What’s very cool this year is that those who win Oscars in next week’s ceremony will take home an Oscar that will mimic Walt’s in make and model.

The Academy of Motion Picture Arts and Sciences announced this week that it has chosen a new vendor to create the statuettes. It has tasked that vendor, Polich Tallix Fine Art Foundry based in Rock Tavern, New York, to make a statuette that takes Oscar back to its “fine art roots”.

The first types of Oscar statuettes were made out of solid bronze and Walt was a recipient of a few of them before the metal and slight design changes were made that included a gold-karat finish that was applied to give the Oscar its current golden look. Inspired by the early bronze statuettes, Polich Tallix artisans utilized the latest technology to create a statuette that mimic the first statuettes.

The process as described by The Academy:

Polich Tallix started its Oscar-making process by creating digital scans of the 1929 statuette and a modern-era pedestal base.  The digital Oscar was then 3D-printed and molded so the form could be cast in wax.

Each wax statuette is coated in a ceramic shell that is cured and fired at 1,600°F, melting the wax away and leaving an empty Oscar-shaped form.  The statuettes are then cast in liquid bronze at more than 1,800°F, cooled, and sanded to a mirror polish finish.

The figure portion of each Oscar is electroplated with a permanent layer of reflective 24-karat gold by Epner Technology, a renowned high-tech specification electroplating company in Brooklyn.  The statuette’s bronze base receives a smooth black patina, which is hand-buffed to a satin finish.

Oscar’s overall size of the statuette remains the same compared to its immediate predecessor.

It took about 3 months to produce the 50 statuettes that will be handed out on Oscar Sunday next week.

With all the care and craftsmanship going into creating the Oscars, hopefully the winners will realize their award is now even more stepped in some magical movie history that ties them to a legendary film pioneer and Oscar winner like Walt Disney himself.