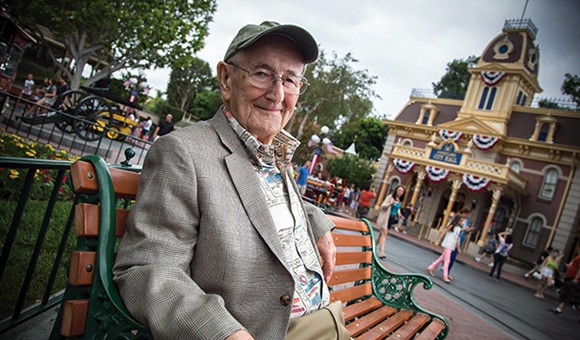 You might not know Jack Lindquist, but once again, here is a former Disney employee whose work you have been directly effected by.

Lindquist was hired personally by Walt Disney to become Disneyland’s first advertising manager. He was responsible for all the brand, messaging, and publicity for Walt’s first Magic Kingdom. It was probably a difficult job as the success of Disneyland was directly tied to its marketing efforts since early public and private feedback wasn’t too eager.

After the first few weeks after that famed July 1955 opening, Lindquist’s work seemed to have paid off with the thousands of guests who traveled from near and afar to experience the Anaheim theme park. He went on to institute the “E-Ticket” program that made Disneyland’s attractions and shows equally desirable to the movies and TV shows they brought to life. He also started the Disneyland Ambassador Program and the collectible Disney Dollars.

His marketing success lead him to serve at other Disney Parks, including Walt Disney World, Tokyo Disneyland, and Disneyland Paris. He was also a strong proponent of expanding the Disneyland Resort, which would later become Downtown Disney and Disney California Adventure Park.

Walt was so impressed with his work that he promoted Lindquist to serve as Disneyland’s first president, in charge of Disneyland’s day-to-day operations and future expansions. The role, which he served in from 1990 to his retirement in 1993, would be “the best job in the world”.

“Jack Lindquist was a Disney original in every sense,” said Disney Chairman and CEO Bob Iger in a statement regarding his passing. “He made sure Disneyland was the Happiest Place on Earth for each guest who walked through the gates, setting the standard for every leader that followed. Those of us who had the good fortune to know Jack will always remember the kindness, humility and dedication that made him such an important part of this company and a true Disney Legend.”

The Disney Legend and “Jack of all trades” was born in Chicago (just like Walt) in 1927. He is survived his wife, Belle and their kids. Be sure to read more about him in his memoir, In Service To The Mouse. Here’s hoping that you appreciate the work he did for your love for the Happiest Place on Earth.