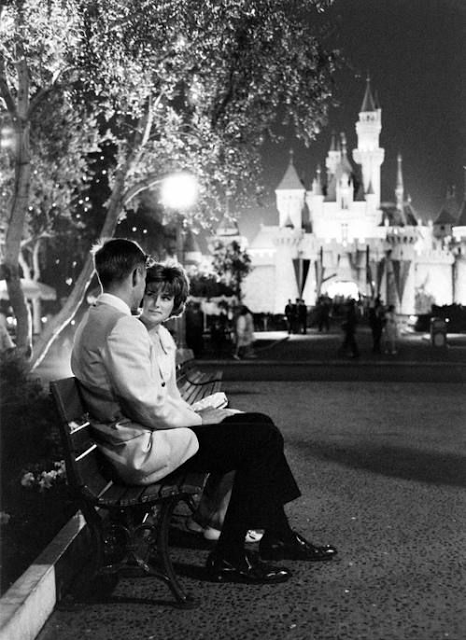 A couple sitting on a bench during “Date Nite.” (Photo via Disney Avenue)

In the immediate years following Disneyland’s opening in 1955, one of the biggest challenges was making the park profitable. The park’s first ever, private (requiring separate admission) nighttime event “Date Nite at Disneyland” was promoted by the late Jack Lindquist, Disneyland’s first president and advertising manager. On top of providing an enchanting evening for dapper couples in the late 50s and 60s, it was the park’s first foray into expanding its nighttime operations, appealing to the adult demographic, and offering nighttime spectaculars and entertainment.

“Everyone thinks Disney was a tremendous success right from day one.” It was from a public standpoint, but not financially”, Jack Lindquist said. “For the first two-and-a-half years, we operated 34 weeks of the year in the red and 18 weeks in the black. Not a good business plan,” he said.

From a financial standpoint, “Date Nite” would bring in a new market as well as capitalize on longer operational hours. The ads released by Disney at the time all point to a singular message – Disneyland was the perfect setting for a romantic date. 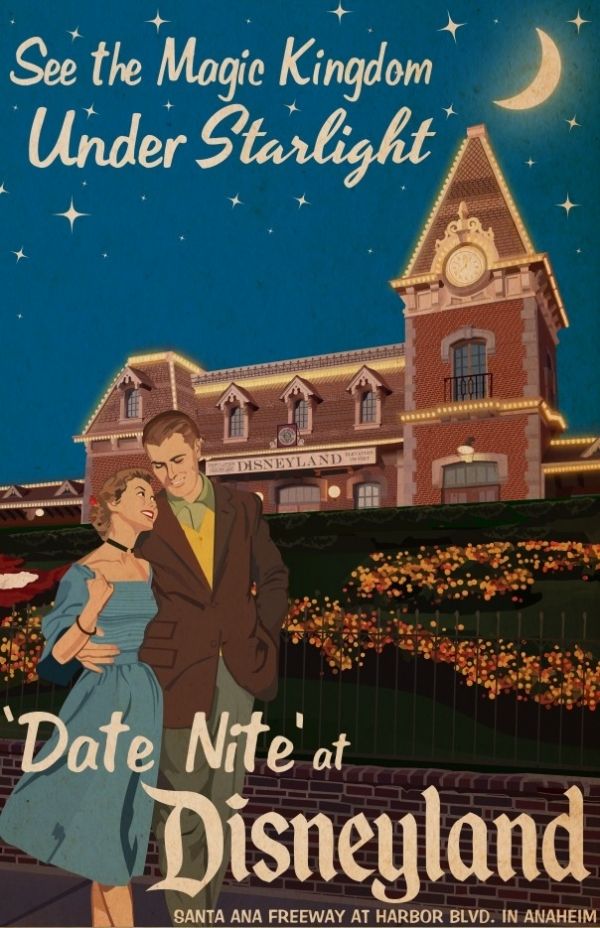 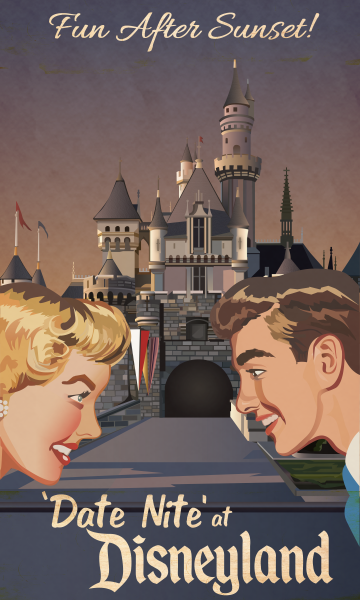 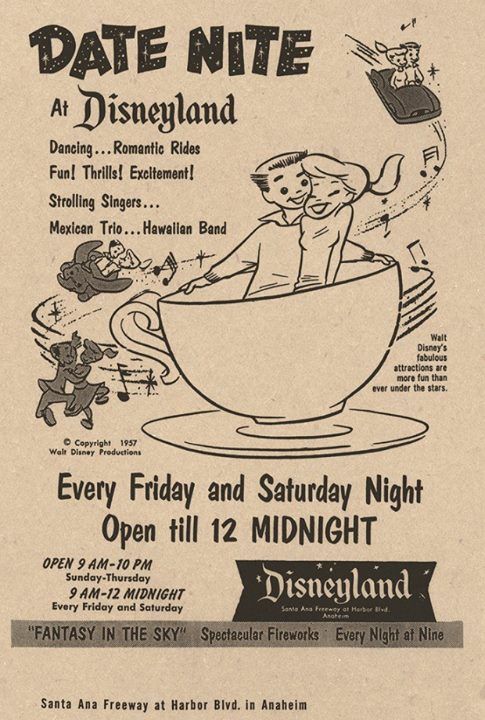 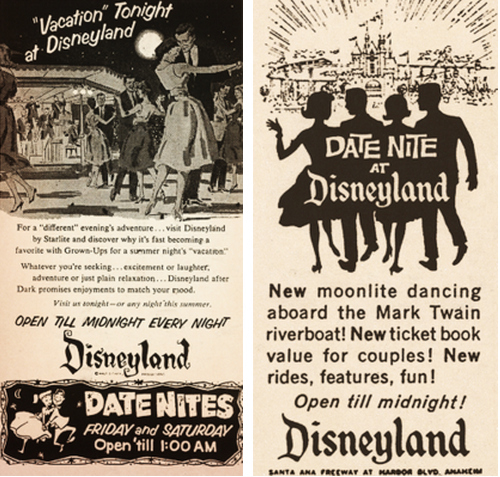 Photos recovered from “Date Nite at Disneyland” show couples stepping out in style in their best. The gentlemen in their suit, ties, suspenders, and polished shoes; the women in their Sunday dresses, wide skirts and dancing shoes. 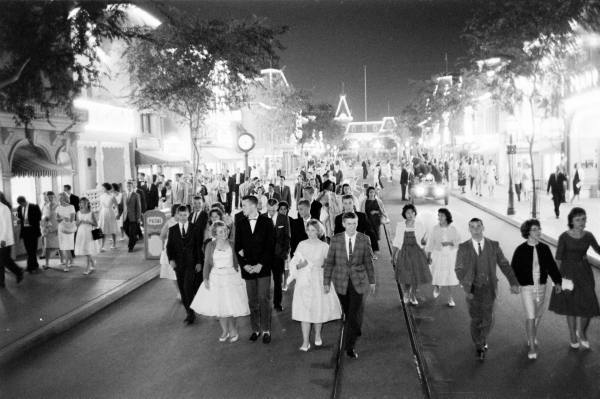 Disneyland brought in live entertainment on various dance floors throughout the park as dancing was a very popular pastime. Old-fashioned, big bands such as the Elliott Brothers, Phil Gray and his Tomorrowland Orchestra, and the Hawaiian Trio performed. There were even dance floors on the Mark Twain Riverboat and inside the Golden Horseshoe. 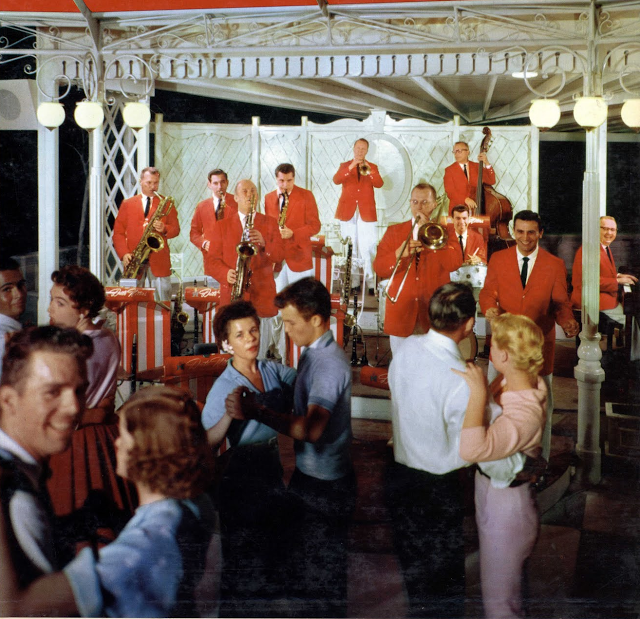 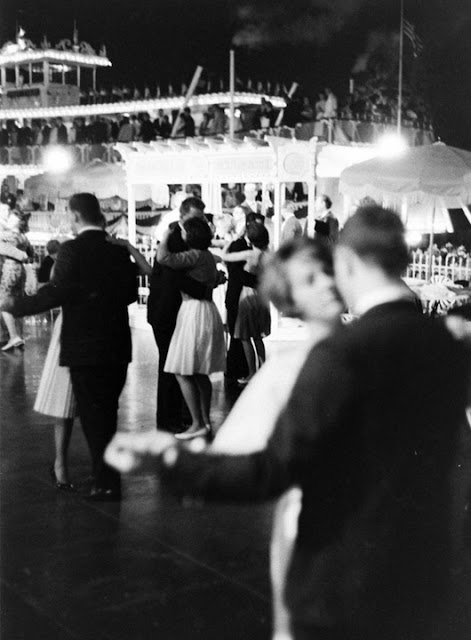 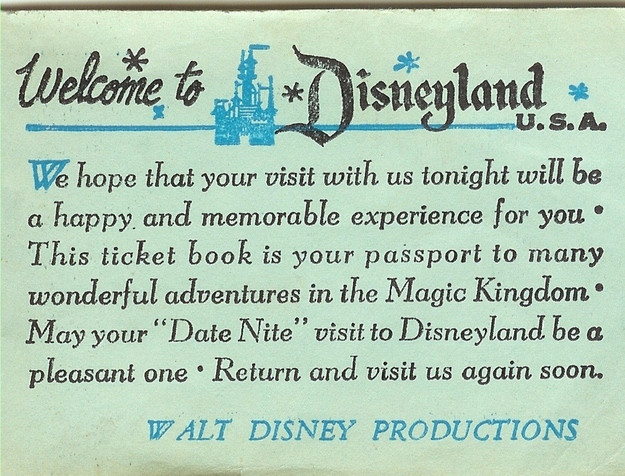 Imagine reading this magical message on your ticket book before your “Date Nite.” (Photo via Vintage Disneyland Tickets)

At 9PM, guests were treated to a special nighttime fireworks show “Fantasy in the Sky.” Today, Disneyland is renowned as a destination for couples to celebrate their anniversaries, engagements, and happily-ever afters. “Date Nite at Disneyland” helped establish the mentality that Disneyland was not just a place for children to have fun; the adults can join in too. 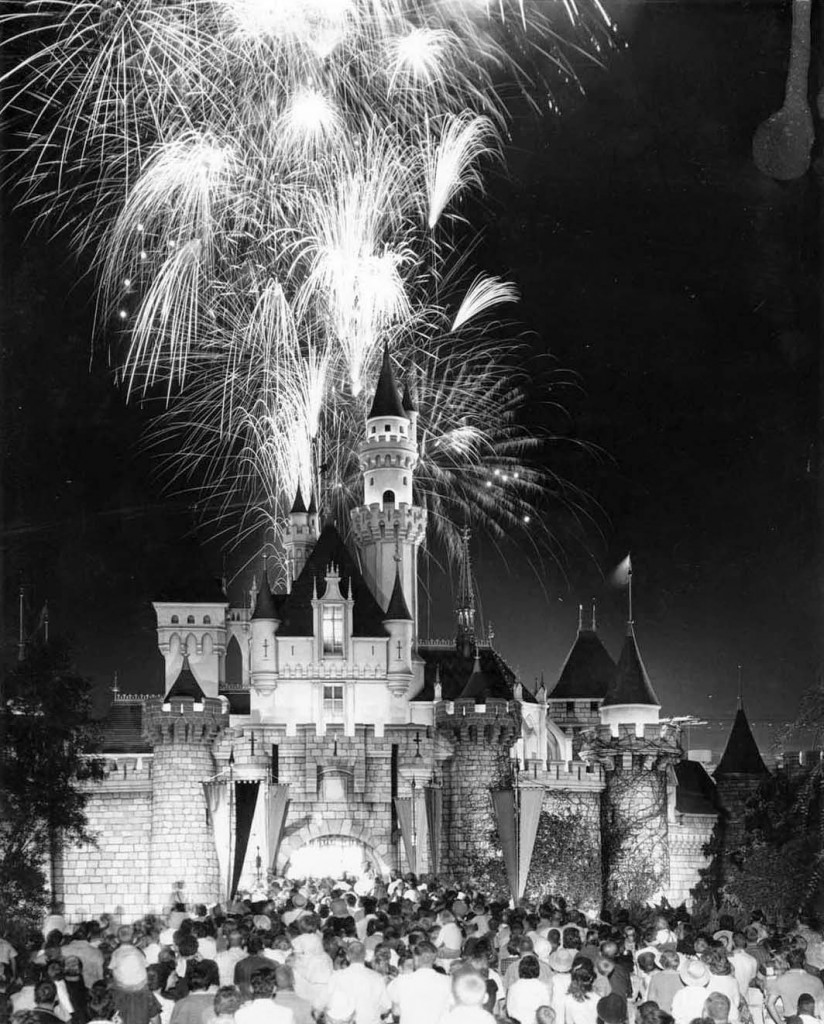 Listen to the special song performed by the Elliott Brothers to promote “Date Nite” below.

Currently, Disneyland Park still has a live band for swing dancing at the Royal Theatre dance floor every Saturday night, although the schedule sometimes varies. Additionally, Dapper Day is held twice every year to relive these fond memories of Disneyland’s past.