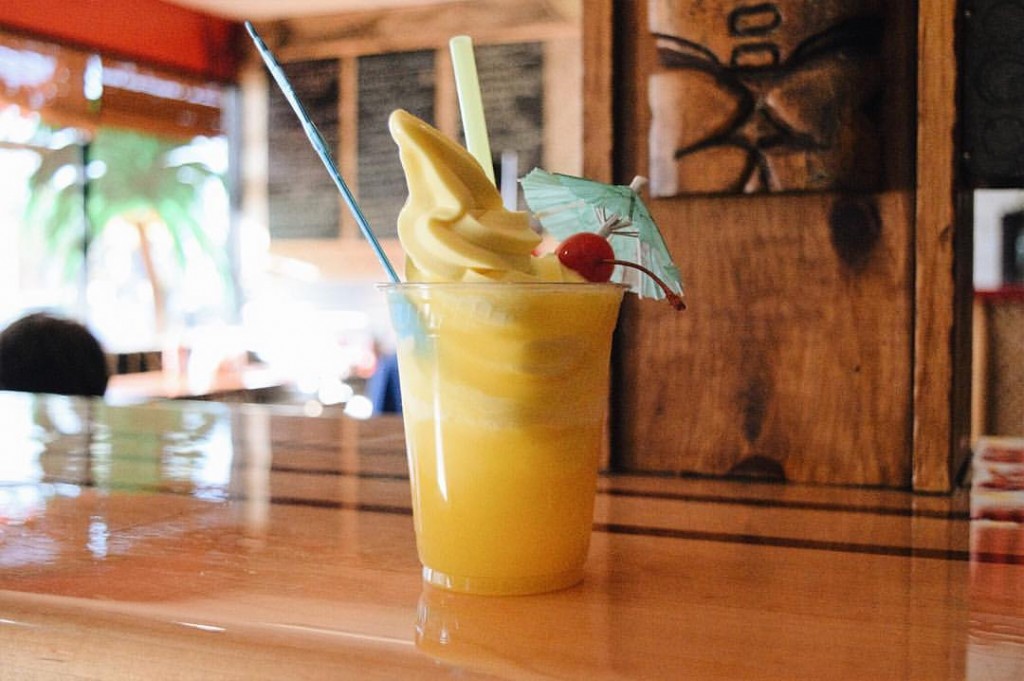 Huntington Beach Hawaiian shave ice shop Hula Girls is the only place in Orange County that serves authentic dole whip other than Disneyland. It is also one of the few places in Orange County where you can experience authentic Hawaiian shave ice like those served on the islands. This is because the husband and wife duo Jason and Kelly Cartter, who own and manage Hula Girls, have deep roots in the Hawaiian as well as Disney community. 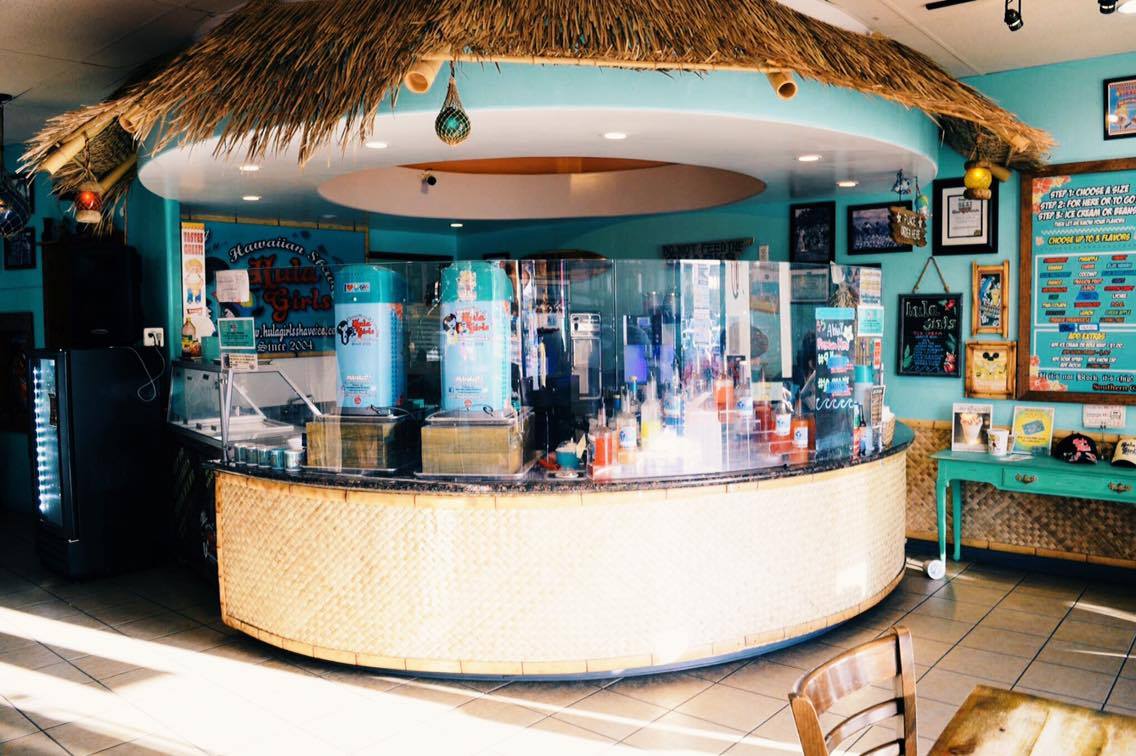 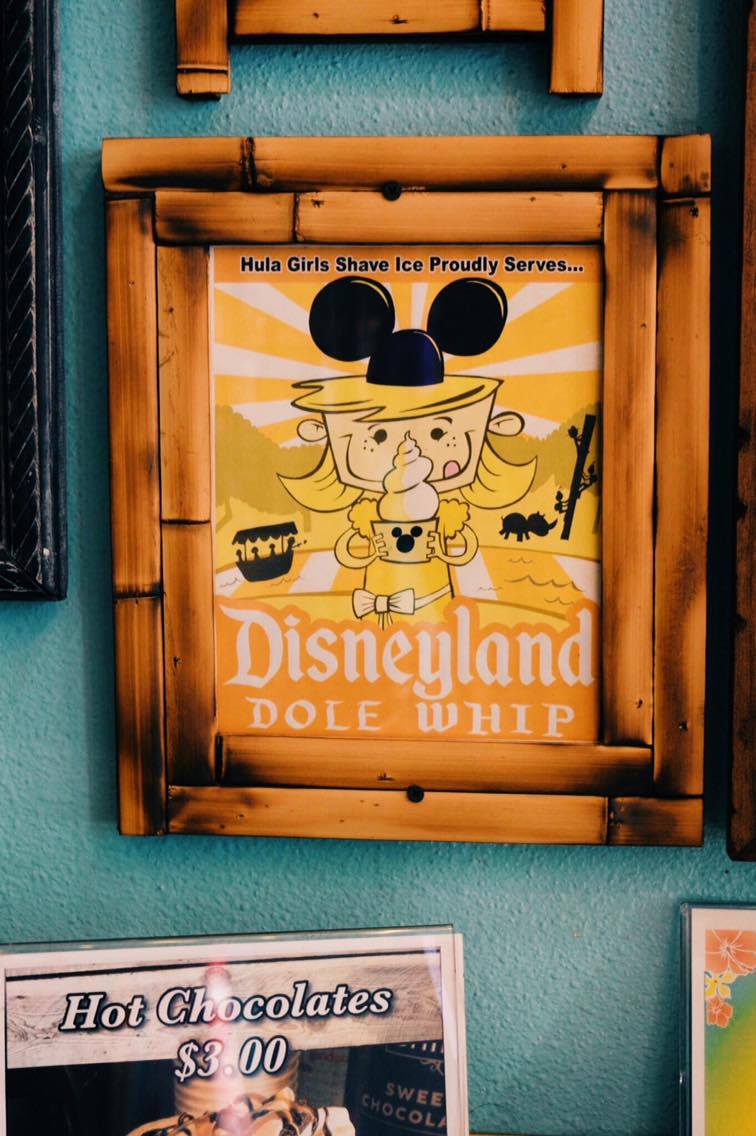 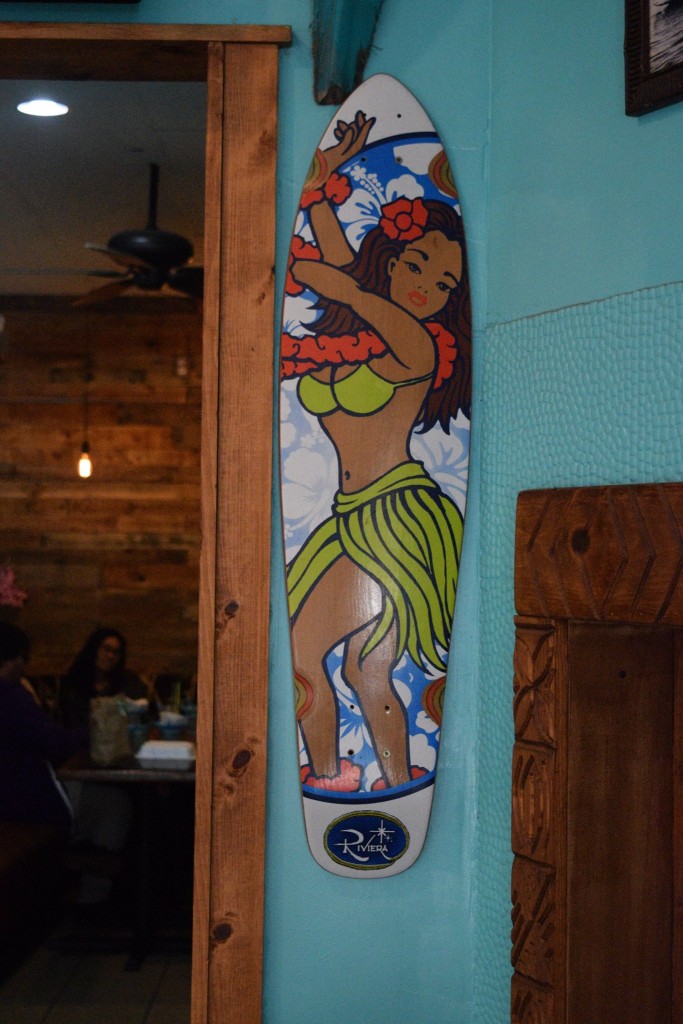 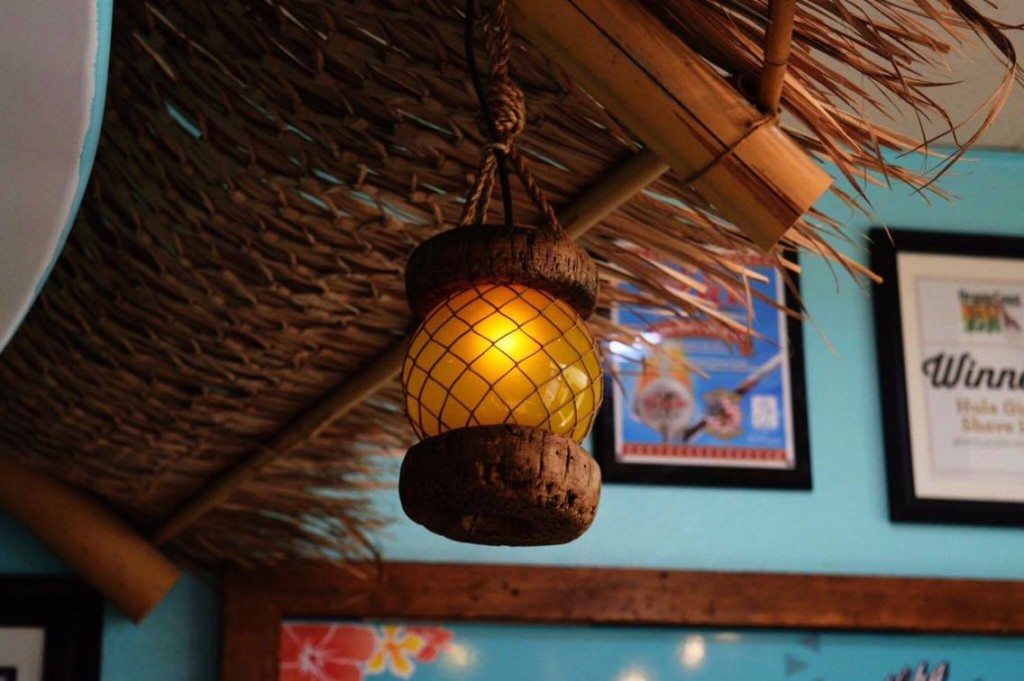 The moment you step into Hula Girls, there is an immediate family-type atmosphere that is very inviting. The shop actually shares a space with Dough Doughs, a Hawaiian cafe and restaurant. Both spaces are themed to tropical perfection with bright, yellow plumerias hand-painted on the walls, lanterns, wooden tables, tiki carvings, and colorful images of Hawaii plastered on the walls. There is plenty of seating for large groups with a Disney movie that usually plays on the TVs (Jason’s favorite is Lilo and Stitch). Jason describes the atmosphere inside Hula Girls and Dough Doughs with a Hawaiian term — “kanikapila.”

The Cartters started their business in 2004 with their first official gig serving over 2,000 shave ice during a pediatric cancer run fundraising event. Though they started their business that year, they had been providing shave ice for family and friends way before then. Jason’s father was an engineer for Trident missile and his family would go back and forth from Hawaii to the US during missile tests. To him, Hawaii has always felt like home. They decided to name their business after their daughters Maddie and Taylor who were their “hula girls.” 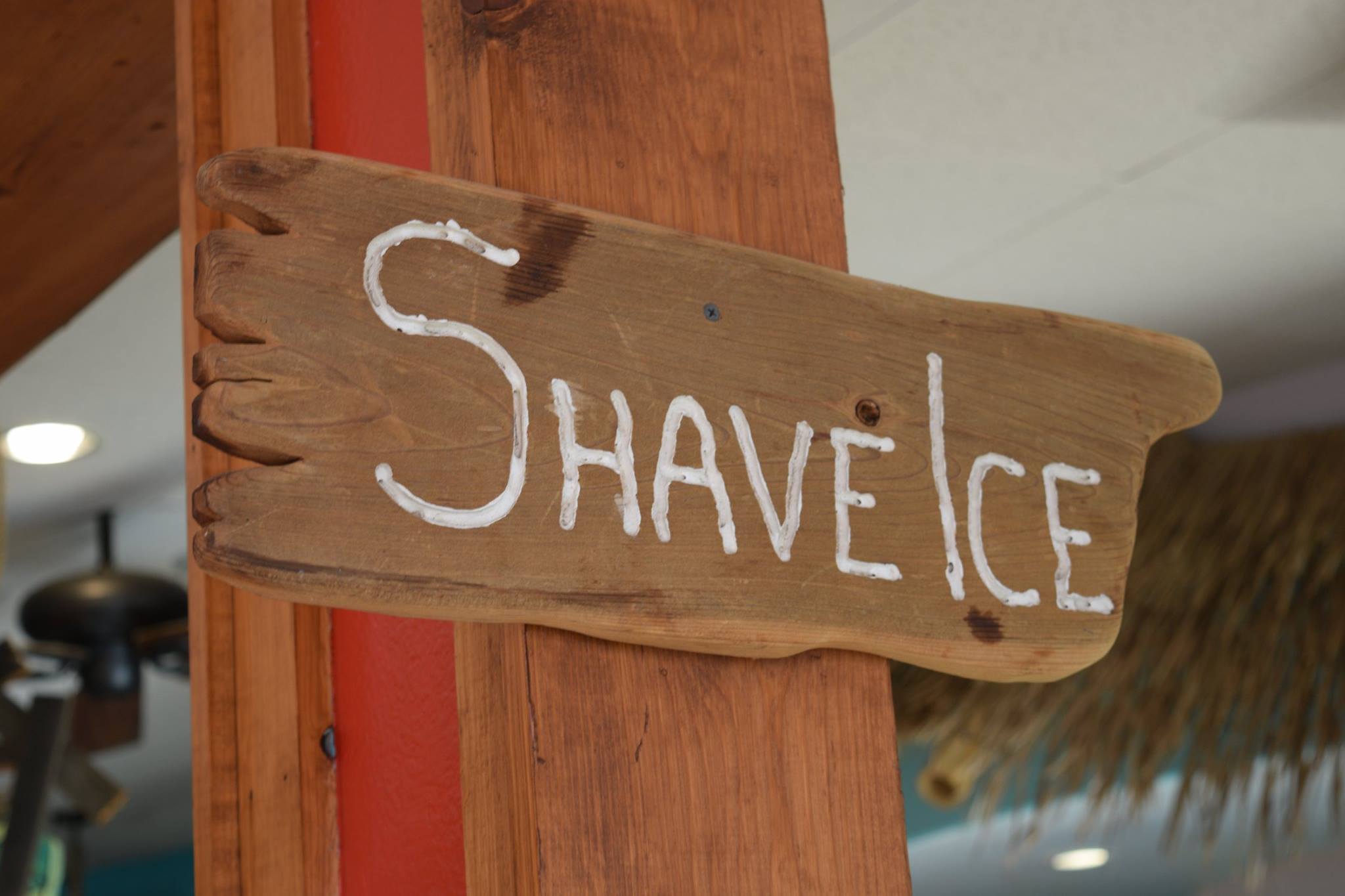 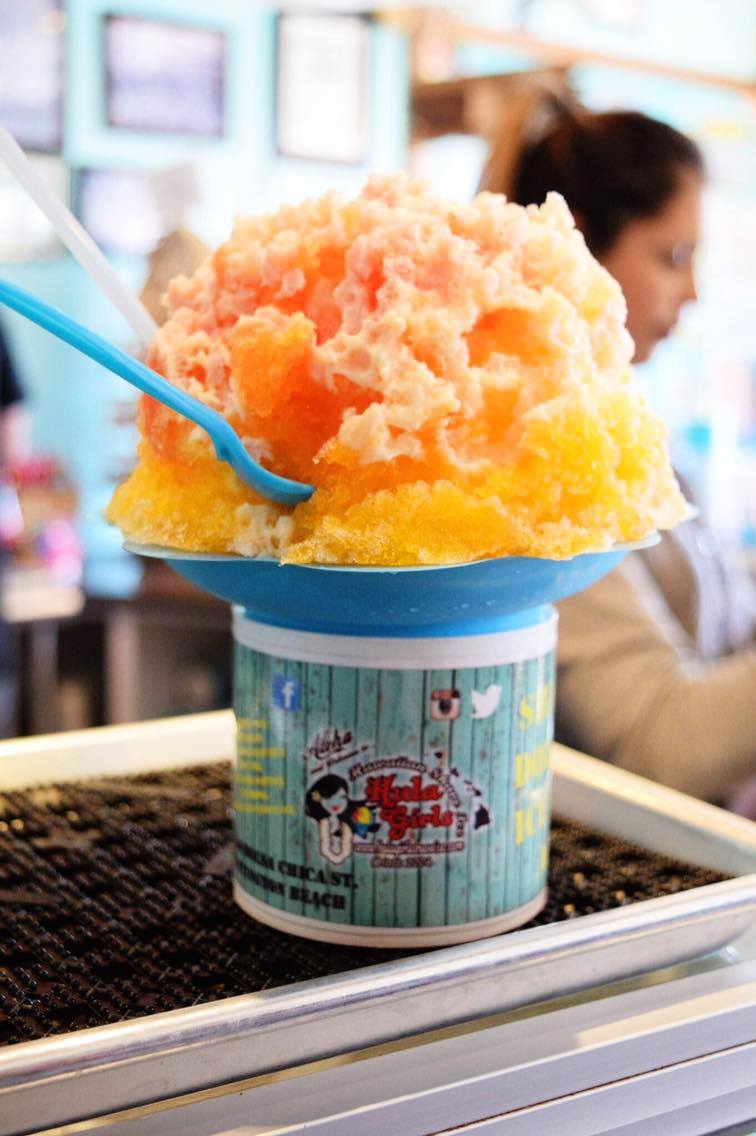 Hawaiian shave ice is Hula Girls’ main speciality. In Hawaii, it’s spelled shave ice, never shaved. Shave ice is light and fluffy, never crunchy. It’s a very popular snack in the islands and can even be regarded as Hawaii’s national dessert. The Cartters modeled their business after their favorite shave ice shops such as Matsumoto’s in Haleiwa, Jojo’s Shave Ice in Waimea, Waiola’s in Honolulu, and Wishing Well in Hanalei.

Jason was a cast member during Disneyland’s 40th anniversary and Kelly’s father was a concrete artist who worked on the refurbishment of Matterhorn and designed the Cave of Wonders sculpture at Aladdin’s Oasis. Since the time Jason was a cast member, he believes that Dole Whip has truly taken off as an iconic dessert at Disneyland.

The Dole Whip snack began when Disney partnered with Dole in 1976 to sponsor the Enchanted Tiki Room attraction. Jason explains the appeal of Dole Whip and attempts to explain why there is such a long line for it at Disneyland.

Dole Whip is refreshing and creamy, yet doesn’t make you thirsty like ice cream does. The longer the line is for it, the more you want to get it.”

For a while, Disney Parks and Resorts and the Dole Plantation in Hawaii were the only places that served this delicious dessert. After acquiring the rights to serve Dole Whip, Hula Girls has been experimenting with their Dole Whip creations such as mango Dole Whip and chocolate-covered Dole Whip. Not only do you get your classic Dole Whip, but you get to try a myriad of combinations such as Lava Flow shave ice (POG, pina colada, tigerblood, and rasberry sauce) with mango Dole Whip served on the top and bottom. 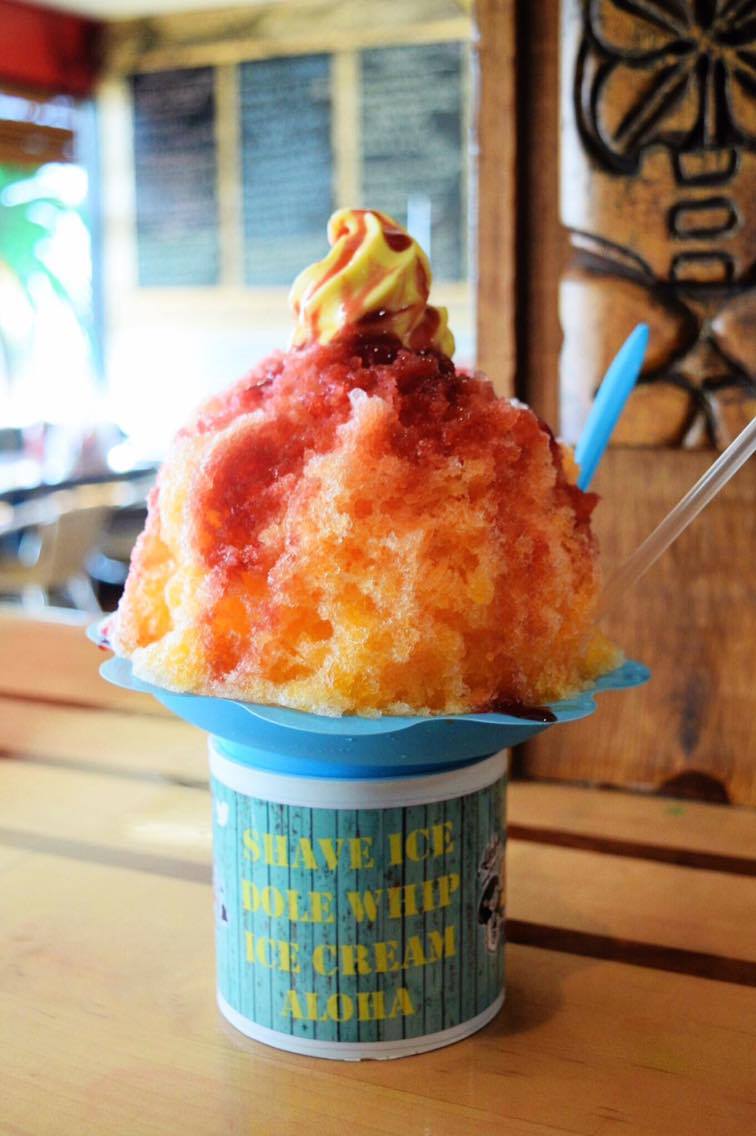 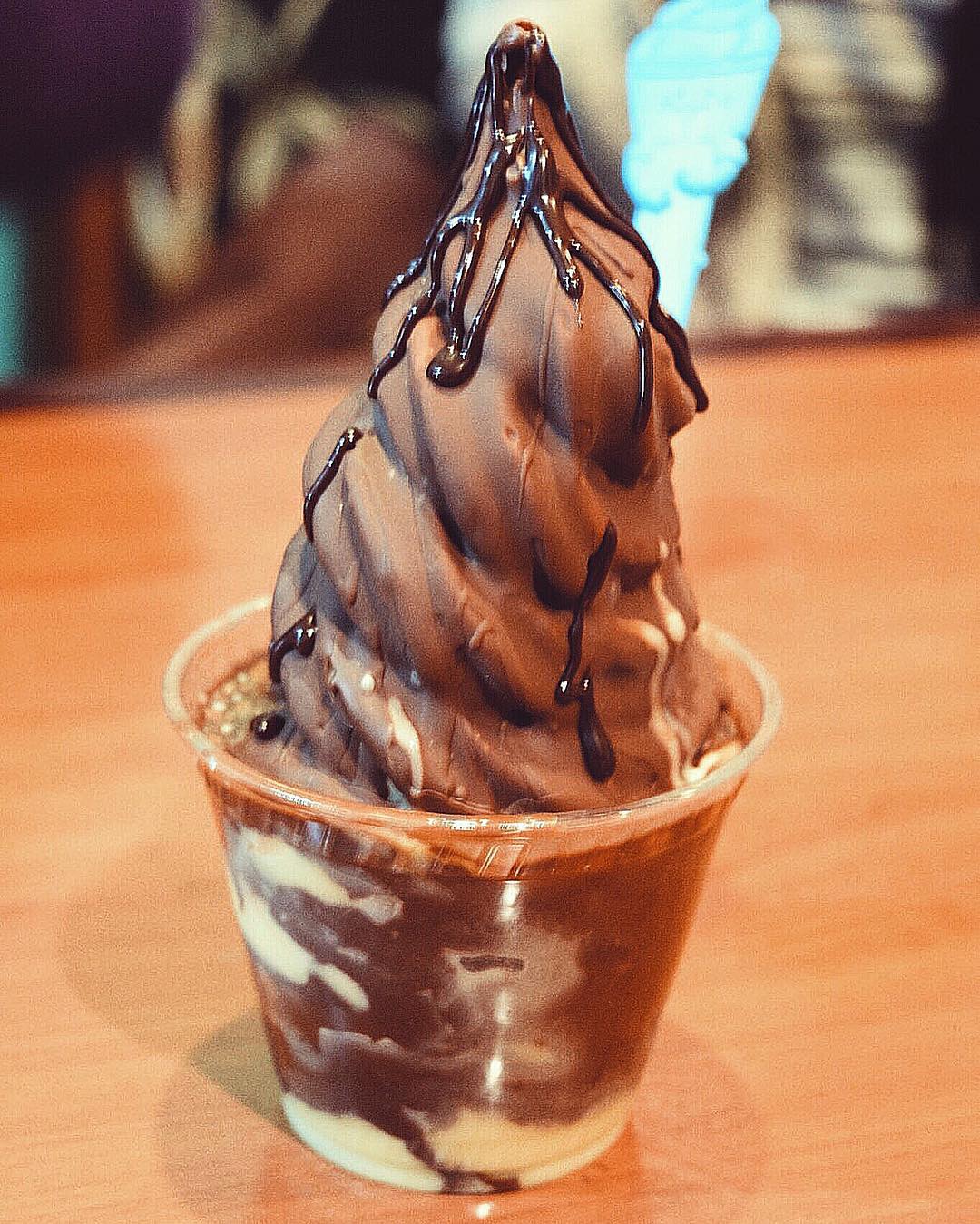 The Cartters have been APs (annual passholders) for 18+ years and cater cast member events at the Disneyland Resort like “Lilo and Stitch movie night.” Since they have such a strong tie to the Disney community, they offer discounts for APs and CMs (cast members).

At Hula Girls, they never use high fructose corn syrup to make their house-made syrups. They use pure cane sugar and natural food extracts, and make their syrups in huge vats similar to how craft beer is made. Hula Girls also accommodates special diets and encourages customers to pitch their own flavor combinations. Hula Girls is all about options!

It is this thirst for creativity and new offerings that allow Hula Girls to keep adding to their “secret” menu. They hope to branch out and open more locations throughout Southern California. For now, find them along Bolsa Chica St. just three miles west from Bolsa Chica State Beach. Take some Dole Whip to go (available in pints) and head to the beach! 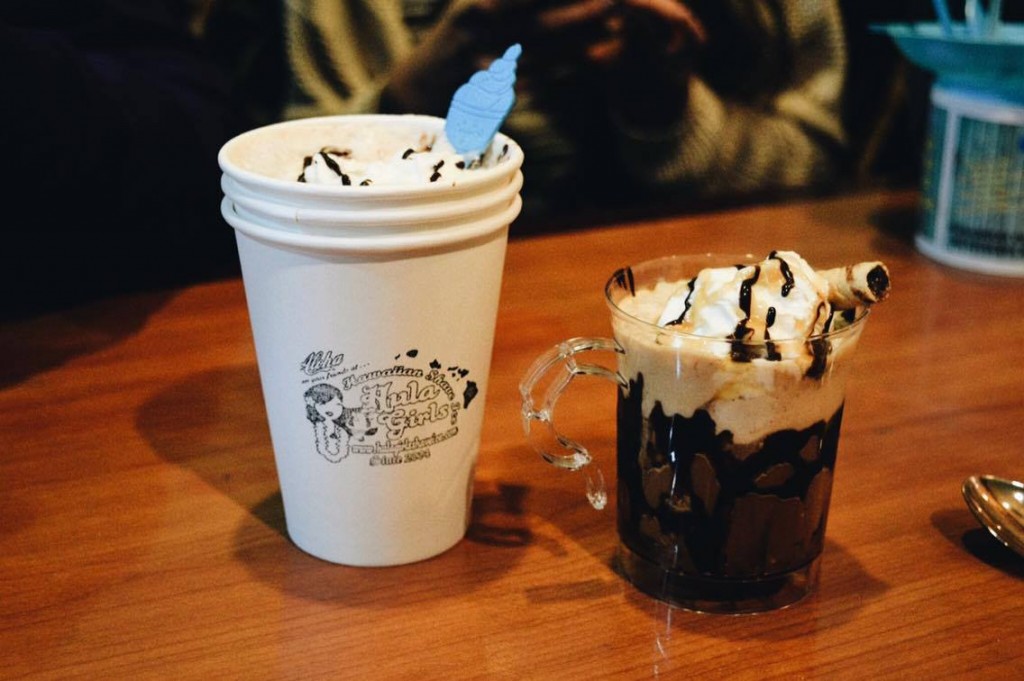 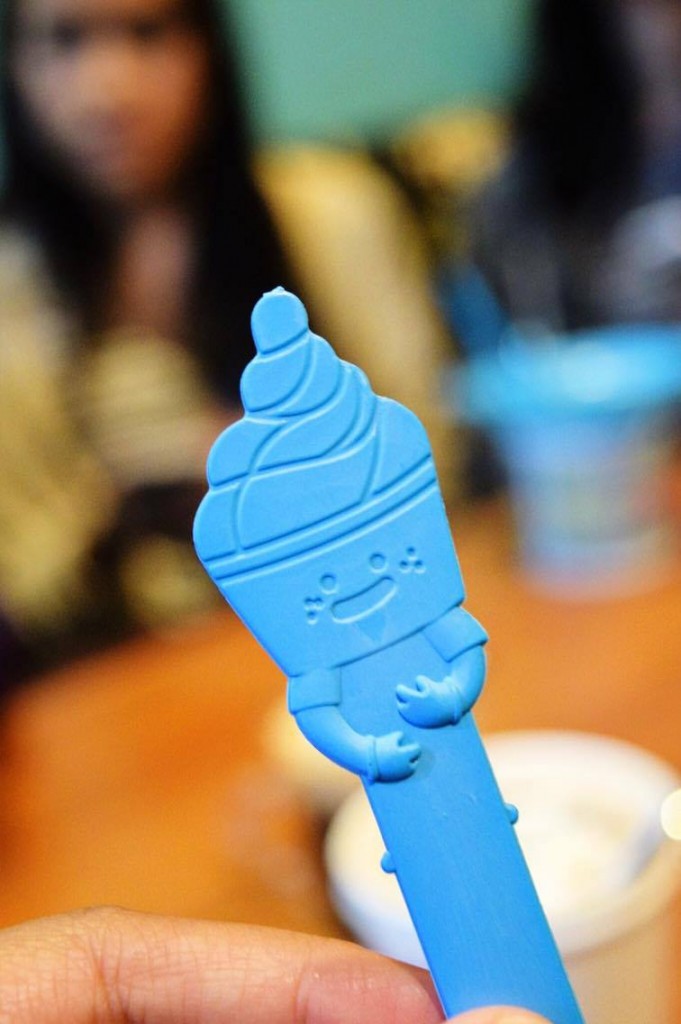 Nestle Hot Chocolate (like the ones sold at Disneyland) and Affogato 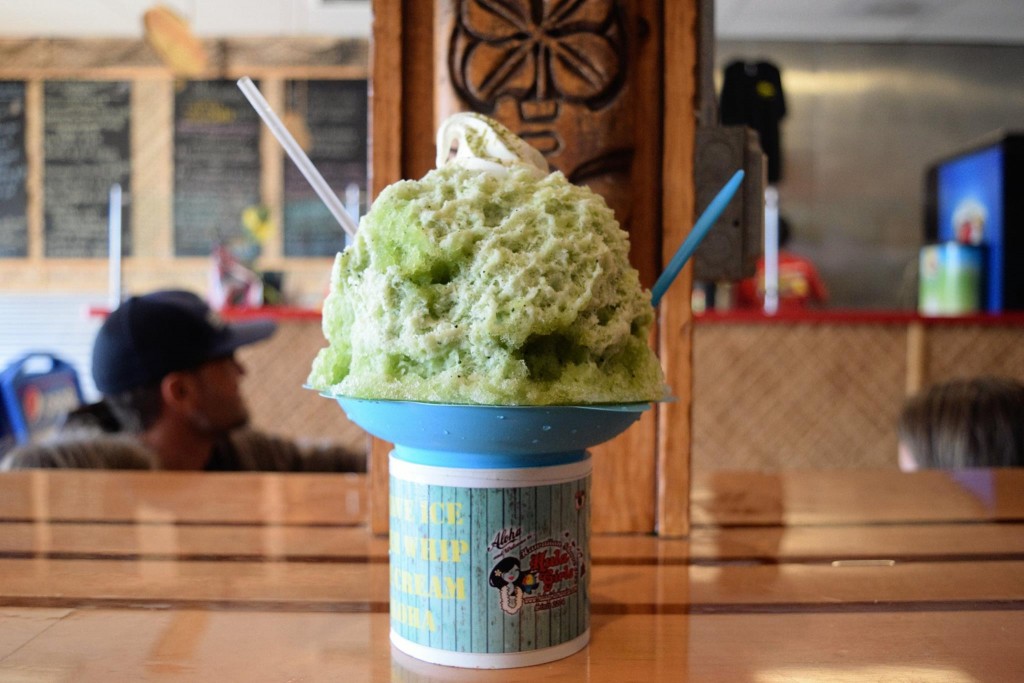 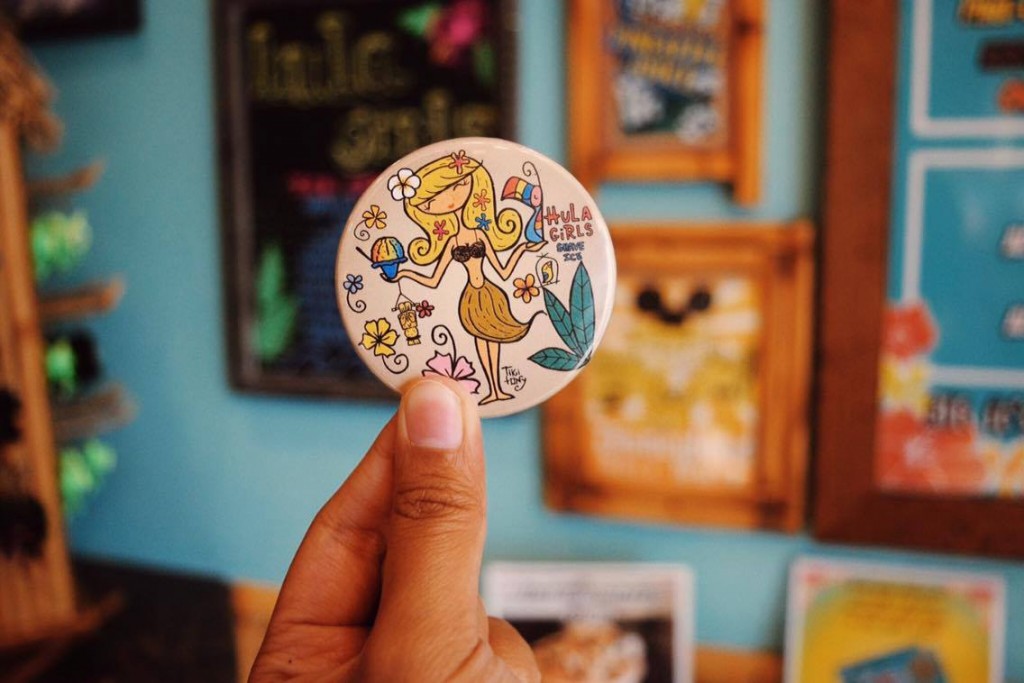 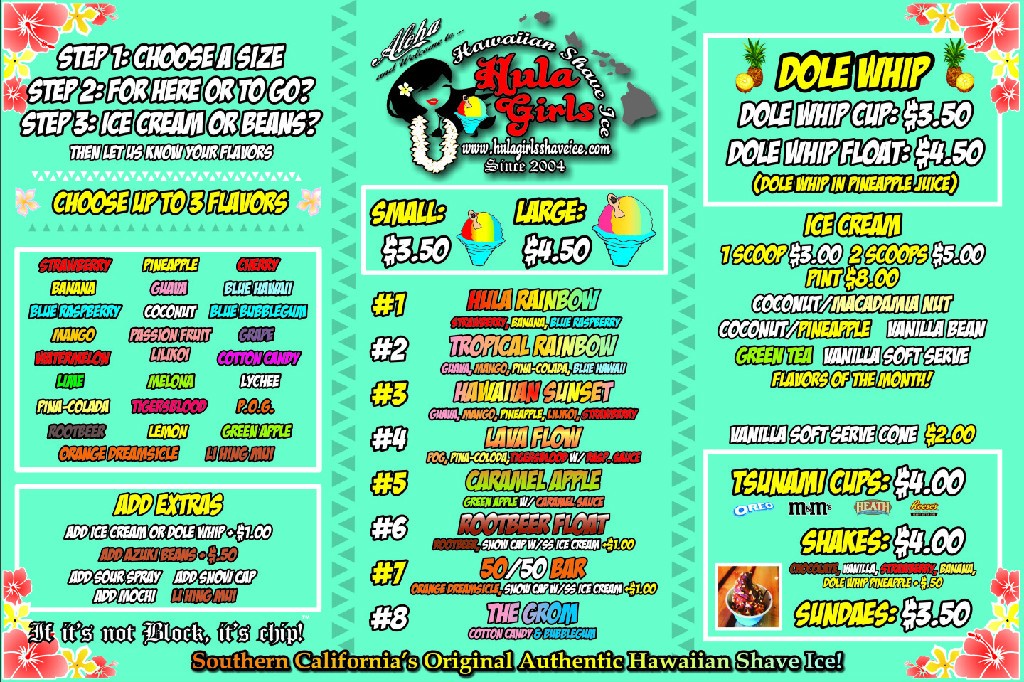