On March 13, the stars and creators of The Black-ish appeared at the Dolby Theatre. The panel was a part of the 33rd annual festival held by The Paley Center for Media. It was just like an episode of the show: fun, funny, and real. It gave fans unprecedented access to the stars of the show.

The panel began with a screening of the March 16 episode, “Any Given Saturday”. The documentary-style episode, told through Diane’s point of view, took a look at the world of children’s basketball. Kenya Barris described why they experimented with a new storytelling mode, explaining that the young stars, “are growing up and can build story lines on their own.” The actors bring so much to the characters that Black-ish changes from what the creators originally imagined it as. Barris praised Tracee Ellis Ross in particular for redefining a television mom.

Anthony Anderson reminded everyone Black-ish is Dre’s show before turning to Marsai Martin to say, “You hear that, young lady?” The cast made exchanges like that repeatedly. Their interactions mirror the television family so much so that on a trip to Disneyworld, cast members thought the children were actually related. 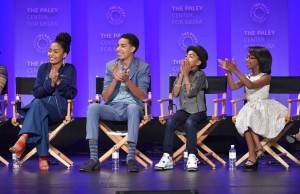 In another exchange, Anthony Anderson shared that Tracee Ellis Ross hit him a few weeks ago. She responded saying she didn’t hit him hard, but there was flurry of punches and a loud noise. In front of the PaleyFest audience, she apologized, though it was apparent they were joking about the incident. 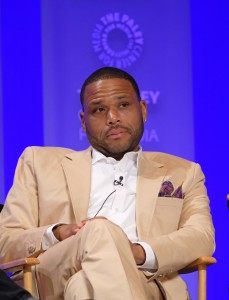 HOLLYWOOD, CA – MARCH 13: Anthony Anderson at PaleyFest LA 2016 honoring black-ish, presented by The Paley Center for Media, at the Dolby Theatre on March 13, 2016 in Hollywood, California. © Michael Bulbenko for the Paley Center

They also referenced the fact that Tracee Ellis Ross hated Anthony Anderson when they met, explaining that he has a heart of gold, but it’s wrapped in shards of glass, saying, “if you come at him the wrong way, you’ll get cut.”

The cast also explained their audition experiences. For example, when auditions were held for the role of Bow, Anthony Anderson had a bag of roses for each person auditioning. When Tracee Ellis Ross came in, he told her to “tell them other heifers to go home.” She shrugged off the statement saying, “I’ve been in this industry long enough to know it doesn’t mean anything.” 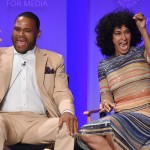 HOLLYWOOD, CA – MARCH 13: Anthony Anderson and Tracee Ellis Ross at PaleyFest LA 2016 honoring black-ish, presented by The Paley Center for Media, at the Dolby Theatre on March 13, 2016 in Hollywood, California. © Rob Latour for the Paley Center 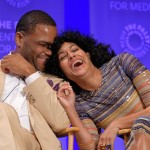 HOLLYWOOD, CA – MARCH 13: Anthony Anderson and Tracee Ellis Ross at PaleyFest LA 2016 honoring black-ish, presented by The Paley Center for Media, at the Dolby Theatre on March 13, 2016 in Hollywood, California. © Rob Latour for the Paley Center

Perhaps most notable was the way the actors and creators of the show emulate the show’s wider messages. For example, when Jeff Meacham asked if the Dolby Theatre was were the Oscars took place, Nichelle Turner, the moderator, said, “yes, but if this were the Oscars, you two would be the only ones on stage” referring to Meacham and Mackenzie. The diverse crowd erupted in applause and Anthony Anderson stood up to hug the visibly embarrassed moderator.

Though she didn’t intend to make that statement, it fit with what the show is all about. The cast and crew went into how they each felt about episodes like “The Word” and “Hope”.

Kenya Barris saw a text on his daughter’s phone from a boy named Asher who was using the word, which sparked the idea for the episode. While he didn’t know what to tell his daughter, he knew how Dre would react. Barris added that America is a melting pot, which makes the country great, but things become culturally appropriated. “We took the word back. Everyone has a differing opinion, [but to me] it’s a badge. That’s the one word you can’t appropriate. Asher shouldn’t be saying it.” In a similar vein, Anthony Anderson has not stopped saying the N word, telling the audience, “I don’t think it’s a great word, but I come from a generation where it’s a term of endearment. I’m proud to use the word.”

While Anderson and Barris, being from the same generation, had a similar view, they conceded that they didn’t have the answer, but the knew how the characters would feel.

The cast and crew also discussed the episode “Hope”, which questions issues of polive brutality. When asked whether the episode was too risky or edgy, Anthony Anderson explained that they pride themselves on divisive topics in order to spark a necessary conversation. The episode, which took place in one room, was intended to be a claustrophobic peak into the family’s room. Dre was talking to his family during an intimate moment, not a presentation. 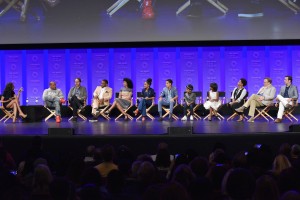 HOLLYWOOD, CA – MARCH 13: Nichelle Turner and the cast and creatives of black-ish at PaleyFest LA 2016 honoring black-ish, presented by The Paley Center for Media, at the Dolby Theatre on March 13, 2016 in Hollywood, California. © Rob Latour for the Paley Center

Jenifer Lewis revealed that she watched “Hope” with her daughter and they both cried. She commented that cried in particular when the children asked if anyone would tell them what was occurring. Yara Shahidi watched the episode with her 8-year-old brother and asked him to write down his questions. He asked about Trayvon Martin and Eric Garner. She explained that she felt conflicted over how much to tell him because she didn’t want to break his world of Minecraft and idealism. Marcus Scribner hoped they were able to start a conversation amongst families to come to their own conclusions on how to talk to children about police brutality.

When asked if the decision for it to take place in one room was a nod to Norman Lear, the legendary television writer and producer, Kenya Barris said the whole show is a nod. Black-ish in its entirety is derivative of Norman Lear.

Anthony Anderson recalled how he felt when President Obama got out of the car to greet people on his way to the White House, saying ” “get your a** back in the car, get to the white house first, then you can walk around!” “Hope” referenced the fear felt by many as the President walked down Pennsylvania Avenue during the inauguration in 2008, fearing he would be assassinated before assuming office. Anderson likes to think that during the filming of that scene, he wasn’t acting, rather recalling his own thoughts.

Black-ish represents a minority that so often is portrayed as having a monolithic voice. They lay out feelings and present differing generational views. They have difficult conversations, but also lots of fun. Though the writers may not know the answers to the problems faced, they know how the characters would respond, creating an important piece of entertainment necessary in “post-racial America”. It’s not surprising that ABC has ordered a third season of Black-ish.

If you would like to attend next  year, you can find out how in a previous post.