On March 13, the cast and creators of Black-ish appeared at PaleyFest, The Paley Center for Media’s 33rd annual event. While the cast and crew spoke much about the way their show was able to push boundaries, one important question was finally answered: how did a show like this come to ABC?

At the end of the panel, a member of the audience asked Kenya Barris and Anthony Anderson why ABC was the right fit for the show. Anthony Anderson and Kenya Barris began by explaining how they were told by mutual friends that they should meet each other. The men had a lot in commonm including the same manager: for example, Anderson is from Compton while Barris is from Inglewood. They were both first generation successful, the only African American families in their neighborhood, and had kids born into privilege. 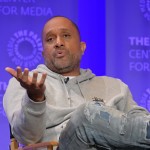 HOLLYWOOD, CA – MARCH 13: Kenya Barris at PaleyFest LA 2016 honoring black-ish, presented by The Paley Center for Media, at the Dolby Theatre on March 13, 2016 in Hollywood, California. © Michael Bulbenko for the Paley Center 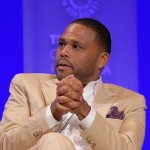 HOLLYWOOD, CA – MARCH 13: Anthony Anderson at PaleyFest LA 2016 honoring black-ish, presented by The Paley Center for Media, at the Dolby Theatre on March 13, 2016 in Hollywood, California. © Michael Bulbenko for the Paley Center

Anderson explained that his children went to private schools saying, “not only was my son the only chocolate drop in his class, he was the only one for more than three years.”

Kenya Barris added that he had tried to get in contact with Anderson, but it didn’t work out. When it finally did, he recalled that Anthony Anderson said, “you weren’t ready for me.”

With so much in common, Kenya Barris came up with an idea a few weeks after their meeting.

The pitch process went well for Anthony Anderson, Kenya Barris, and Laurence Fishburne. The network executives were able to see the Pops/Anthony relationship in the pitch. Everyone they explained their idea to was interested in doing the show, but they ultimately decided ABC was the right fit.

So ABC went to bat for Black-ish, and since then the company and the creators have had a positive experience producing a tradition-breaking show. Executives told the creators they only wanted the show if they would be real, and Barris said that ABC has never pushed them back from doing the story they wanted to do it. They mentioned Paul Lee from ABCm who supported them and the show they wanted to make. They championed the title and they championed the N word episode, allowing the show to be what it is today.

Thanks to ABC, everyone can enjoy the humor, messages, and genius of shows like Black-ish. To learn more about the show, check out the other topics they discussed in the rest of the PaleyFest panel!