With all the hype for Captain America: Civil War, it’s worth noting that this newest film is actually the beginning of the third phase of the Marvel Cinematic Universe (or MCU). Though the first two phases have already come and gone, their movies still connect directly with this last section of Marvel movies.

In lieu of watching all previous films, we’ve created this handy summary guide of MCU’s phase 1 (with a phase 2 summary on the way!) Whether you’re totally new to the universe and want to catch up before watching Civil War, or you’ve seen all the movies and want a refresher, this guide will definitely be helpful for you.

Phase 1 is all about introducing the cast of the avengers: Iron Man, The Hulk, Captain America, and Thor all get their own movies, and major players like Natasha Romanoff (Black Widow), Clint Barton (Hawkeye), and Agents Coulson and Nick Fury are seen overlapping between movies. The phase also introduces the Tesseract: a cube-shaped vessel holding the Infinity Stone, which has unlimited amounts of power. 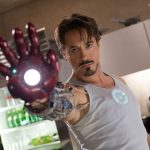 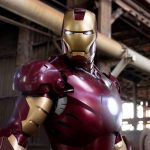 Iron Man is Tony Stark, CEO of Stark Industries, multi-billionaire superhero.  Tony creates the first Iron Man suit as an escape after being kidnapped. On his return he declares the weapons division of Stark Industries terminated, upsetting his business partner Obadiah. With the help of his assistant Pepper Potts, they discover Obadiah has sold Stark products to terrorist and commissioned his kidnap. Despite Obadiah using Tony’s mini-arc reactor to power his own suit, Tony defeats Obadiah and rescues Pepper Potts. In a press conference to announce a cover up story Tony, instead announces to the world he is Iron Man. In the after-credits scene S.H.I.E.L.D director Nick Fury invites Tony to be apart of the Avenger’s Initiative. 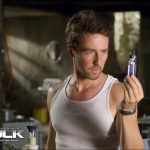 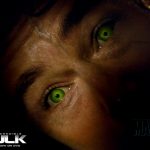 Bruce Banner gains the ability to transform into the Hulk after an experiment led by General Thunderbolt Ross to recreate WWII super soldiers goes wrong. The movie traces Banner’s attempts to gain control over this power as well as his escape from a SWAT team sent by Ross to capture him.

When the leader of the SWAT team, Emil Blonsky, becomes injected with a small amount of the Hulk serum, and later with a small amount of Banner’s blood, he transforms into a creature even bigger than the Hulk and goes mad. Though Banner has been captured by Ross at this point, he realizes that he is the only one who can defeat Blonsky, and does so after Ross releases him.

The final scenes show Banner, still unable to stop his transformations, but now able to control them. Tony Stark is seen with Ross at a local bar, telling him that a team is being put together. 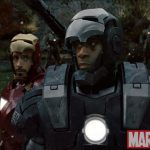 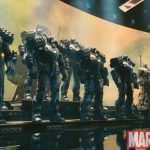 Iron Man 2 continues with Tony Stark dealing with the government, envious business rivals and the mini-arc reactor poisoning his body. In this movie, Stark is approached by both Nick Fury and agent Natasha Romanov, who is later revealed to be Black Widow. Determined to avenge his father, scientist Ivan Vanko teams up with defense contractor John Hammer to destroy Stark Industries. They modify a version of Tony’s suit “War Machine” and sell other suits to the government. During a demonstration to the public, Tony’s best friend Captain Rhodes wears the “War Machine” suit. Vanko programs the suits to kill Tony but S.H.I.E.L.D agent Natasha Romanov is able to reprogram it.

Vanko in his own suit battles it out with Tony, teamed up with Captain Rhodes. After defeating Vanko they discover the suits have a self-destruct mode and return to the demonstration. Tony saves Pepper Potts from the explosion and the two finally share a romantic “I’ve always cared about you” kiss. In the post-credits scene S.H.I.E.L.D’s Agent Coulson is shown in New Mexico informing Fury Thor’s hammer has been found. 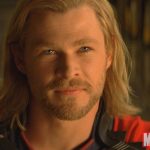 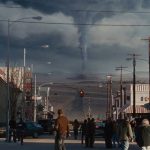 Thor introduces Thor, the crown prince of Asgard (in another dimension) and his lesser appreciated brother Loki, who is later revealed to be the son of their enemy Laufey, leader of the Frost Giants. When Thor is exiled by his father Odin for his arrogance during a battle, he lands on earth and meets Scientists Erik Selvig and Jane Foster (Thor’s love interest). Thor is brought to earth with his hammer, Mjolnir, but upon their arrival finds himself unworthy to lift it.

Back on Asgard, Loki takes control of the throne after his father falls into a deep sleep, and Thor’s friends attempt to bring him back. Loki sends a Destroyer after them, but when Thor faces the magical being himself, he proves himself worthy to wield Mjolnir and it able to defeat it. The Asgardians return to their land where Thor defeats Loki. Though Odin awakens and attempts to make peace between his two sons, Loki chooses to fall into a great abyss, leaving his whereabouts unknown. Thor decides he is not ready to be king while on Earth, and Jane Foster attempts to create a portal to Asgard. 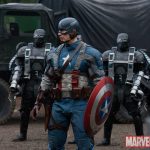 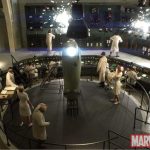 Before Captain America there was Steve Rogers – a true 1940’s American who wanted to protect his country.  Steve’s determination to fight despite his skinny size gives him an opportunity to enlist in the war. With Dr. Erskine’s experiment Steve becomes a foot taller, more muscular and ultimately increases his strength, endurance, agility, and gains the ability to heal himself.

When Steve finally goes overseas he discovers his best friend “Bucky” Barnes has been taken with 400 other soldiers. During the rescue Captain America meets HYRDA/Nazi leader Johann Schmidt aka “Red Skull” who has the Tesseract in his possession.

During a train ambush Bucky defends Steve but unfortunately falls out of the moving train into an icy abyss.  To avenge Bucky Steve faces “Red Skull” and ruins his chance to blow up New York. Steve, however, does not escape from the fight easily, and has no choice but to navigate the plane with the bomb into the ocean, crashing in a location where no one can find him.

The ending scenes of the moving Steve finds himself in modern New York city to find out he’s been asleep for 70 years, waking only when rescued from the ice he crashed into. In the post-credit scene Fury proposes another opportunity for Steve to save the world. Despite being the fourth Marvel film, Captain America is the First Avenger. 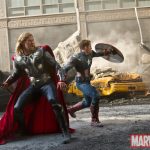 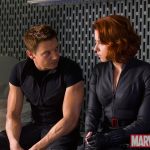 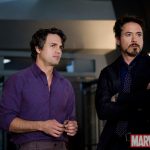 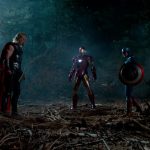 This is the first time Tony Stark, Dr. Bruce Banner, Thor, Natasha Romanov, Clint Barton, and Steve Rogers meet. Loki appears on Earth and uses his mind control abilities and the Tesseract to turn the team against each other. He escapes S.H.I.E.L.D but not before appearing to kill Agent Coulson. His apparent death ultimately becomes the team’s motivation to come together and act as a unit.

On Stark Tower, Loki has created a wormhole to Jotunheim unleashing his Frost Giants into New York City.  The team creates a plan to shut down the portal while at the same time defending the city. Those overseeing Nick Fury do not believe the Avenger’s can stop Loki and launch a missile to destroy New York. Iron Man saves the day by intercepting it and flies into the wormhole, knowing that he will die.  However, though the bomb detonates, Tony manages to fall out of the portal right before it closes. On the verge of dying, the Hulk scares Tony back to life by yelling at him.

While this film solidifies the Avengers’ ability to save the world, they are actually seen separating by the end of the movie. Nick Fury allows them a break, which is a good thing as in mid-credit scene it is inferred there will be another attack on Earth. In the post-credit scene you can see the team together eating in silence at a shawarma restaurant.

Phase 1 sets up the foundation for the Marvel Cinematic Universe and gives the audience insight to each character’s growth as they ultimately become the Avengers. While watching all the movies will definitely help your understanding and appreciation of Civil War and other upcoming movies, it’s not necessary. That’s why we created this guide for you to enjoy.

Be on the lookout for our Phase 2 summary!