The Anaheim Convention Center has and will be the home to many political campaign rallies this year. Democratic candidate Senator Bernie Sanders is one of those presidential candidates that made a stop at the convention center earlier today. During his speech, he did take a jab at one of the large corporations with a property next door – Disney.

Sanders dedicated much of his address to disputing Disney’s fairness in compensating its employees, namely those who work at Disneyland and other Disney Parks in the United States. “Anybody here work for Disney?” Sanders asked the 1,500 people gathered. Sanders continued, “Anybody here making a living wage from Disney?” Many replied with a big loud “No!”

“I’m probably the only politician to come to Anaheim and say this,” Sanders continued. “I use Disney not to pick on Disney but as an example of what we are talking about when we talk about a rigged economy.”

He went on to describe Disney’s unfairness saying that their wages are low resulting in many employees living in motels around the area. He compared that statement quoting Disney’s first quarter earnings of nearly $3 billion, showcasing the inequality and “corporate greed” that he and his campaign are known for. Sanders also mentioned that IT employees at Walt Disney World were replaced with low-wage foreign workers with visas.

He then compared that to Disney CEO Bob Iger and the $46.5 million he received in total compensation last year. “That is what we’re talking about in a rigged economy.”

Disney was quick to issue a statement regarding all of Senator Sanders’ statements.

“Mr. Sanders clearly doesn’t have his facts right,” Suzi Brown, a spokeswoman for Disneyland said in a statement to POLITICO. “The Disneyland Resort generates more than $5.7 billion annually for the local economy, and as the area’s largest employer has added more than 11,000 jobs over the last decade, a 65% increase. These numbers don’t take into account our $1 billion expansion to add a Star Wars-themed land, which will create thousands of additional jobs across multiple sectors.”

Regarding the Walt Disney World statement, a Disney spokesman said that they hired more than 170 other U.S. IT workers to fill those affected by the Parks’ IT reorganization. 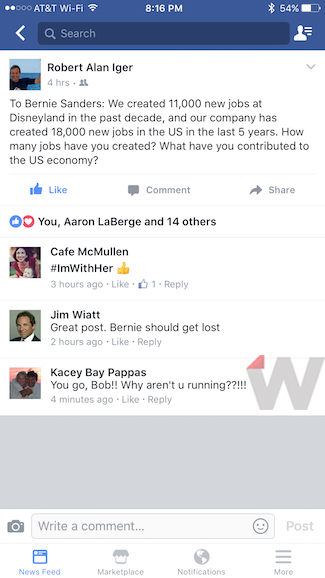 Photo via The Wrap