Last week we had the privilege of having Ming-An do a cover for a DisneyExaminer Music Session, where she sang a beautiful bilingual cover of “Let It Go.” Mind-An has lived and performed in countries around the world, and in the interview below she takes us through an international look at music and Disney.

Check out more on how this young performer sees her craft, and watch her in action in her DisneyExaminer Music Session!

How did your career as a singer begin?

I wouldn’t call it a full fledged singing career yet, it’s like a career in the making.

My passion for music and singing began at a very young age – my mom used to take my brother and I to Music Together classes where a bunch of little kids could join together and we would play with instruments – that’s how my love for music began.

My first professional performance was on CCTV on national Chinese television, which is said to have over 700 million Chinese viewers, which is incredible! It was for the New Year’s special for kids. It was really fun, and I got to sing a Disney song! I sang “You’ll Be in My Heart” from Tarzan.

Were there any other performances you’ve done that are the most memorable?

I performed there and I wasn’t scared at all! As soon as I entered the stage the energy was overwhelming, but I just got settled into it and I just sang and forgot about the fear and nerves. 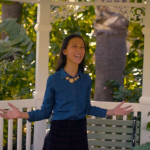 Have you done a lot of singing for other causes?

It’s definitely something that I love to do because music has given me hope and has helped me during bad days, and has given me light. And I hope to spread that light and that happiness to everyone else through music.

I love to sing, and I love seeing people smile, so I want to sing for people who don’t have a voice and to sing to spread awareness, to give hope, and to remind people there’s a better tomorrow. I sang at soup kitchens, I sang at a transition home, I sang at the toy drive, I sang at the La Brea tar pits for anti-poaching, and I’m going to sing at a cancer survivor walk. I think these are all really important to me, to just see different communities and to spread my love!

I watched your performance in the Coke commercial – that line you said at the end was so important: “if you can’t speak someone else’s language, you can use music to communicate with others.” Can you tell us more about that experience? 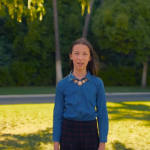 Do you think that the perception of Disney is different in different countries?

Not really! All the kids I’ve met in different countries all know about Disney. They all think positively about Disney, they’re all doodling in their notebooks Mickey Mouse, Minnie Mouse, wearing Disney t-shirts – it’s just something they can all bond about. Disney is a worldwide brand and all kids love Disney, it’s had a huge impact on lives everywhere.

If you were to cover any Disney song, which would you cover?

I would want to do “For the First Time in Forever”, the reprise, with Idina Menzel.

Do you have any tips for other kids who want to go into singing?

Just practice it, and don’t let anyone discourage you, because there are going to be lots of people who are going to say “oh you want to be a singer? That’s so funny, so ridiculous, that’s never going to happen.”

You just have to keep going. If you want to be a singer you have to be thick skinned and only care about the music, and not care about what anyone else is saying. 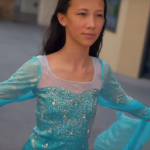 What do you think “Let It Go” might mean to you?

Just not caring about what people think. I’ve always been like, I’m going to fix this about myself just so people will like me, I have to fit in, and I think that I need to let go of that a bit more because at the end of the day it only matters what the people who love me think, and it only matters what I think. So I just have to let go of what – let it go, let go of what they say! – just something to remember.

Is there anything else you want to tell to our readers?

If you want to become a performing artist, just keep practicing. Don’t ever think that there’s lost hope for you. Just keep going where you’re going. Work hard, and you’ll get there someday.

We hope you find Ming-An’s experiences with music and with Disney as inspiring as we do. Her insight on the role of the arts in the community shows just how much impact music and companies like Disney can have on people all around the world!

If you or someone you know would like to do a DisneyExaminer Music Session, please contact us for more information. Be sure to check out Ming-An’s cover, as well as our previous sessions for more inspiration!