Disney’s Alice Through the Looking Glass has been out in theaters for over a week, bringing in over $176 million dollars worldwide. Many movie-goers have voiced their excitement over Disney’s latest adventure to “Underland”, not just because of the exciting story or the cast, but also because of one special song that was played in trailers leading up to the film’s release.

In the second trailer for Alice Through the Looking Glass, pop rock singer Pink performed a stunning cover of the 1967 hit “White Rabbit” by Jefferson Airplane. Fans around the world were enamored by her powerful rendition of the song that depicts the quirky and nonsensical fantasy tale in Lewis Carroll’s Alice’s Adventure in Wonderland and Through the Looking-Glass. Although the song is not featured in the film, it has played an important role in promoting the film  these last few months.

This isn’t surprising considering its Alice-inspired lyrics and the interesting legacy “White Rabbit” holds in the music world. Back before singer-songwriter Grace Slick joined Jefferson Airplane, she was in a band with her husband Jerry, his brother, and a few friends called “the Great Society”. In 1965, Slick wrote the song because she found all of the implicit subtext in various fairy tales like Peter Pan and Alice in Wonderland fascinating. Wanting to illustrate that in a song, Slick drew inspiration from Alice in Wonderland and spent an afternoon writing the lyrics to the song. 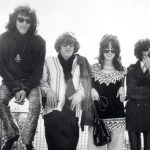 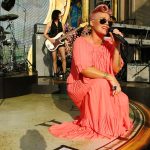 The Great Society went on to perform the song in different bars and clubs in San Francisco in 1966, but not too long after some of the other band members decided they wanted to study music internationally while Slick’s husband wanted to pursue his film studies. Coincidentally, Jack Casady, bassist for Jefferson Airplane, was searching for a replacement for their lead singer and felt that Slick would be a great fit for their band.

Slick brought “White Rabbit” over to Jefferson Airplane and by 1967 they were releasing a newly revamped version of the song as a single, becoming the band’s second top ten success. “White Rabbit” served as one of the defining songs of the psychedelic rock movement in the 1960s and 1970s and has stood the test of time by making appearances in films and television series like The Simpsons, Sucker Punch, The Sopranos, and Supernatural.

When Slick was asked about Pink’s rendition of “White Rabbit” for Alice Through the Looking Glass, she had nothing but praises to give her.

“Pink sings with power, but it’s something more,” Slick told the Wall Street Journal last week. “You sense that if she wanted to, she could open the throttle even more at any time. That coiled energy creates drama and catches the ear.”

If you are feeling that power from “White Rabbit” in the Alice Through the Looking Glass trailer, think about taking a break this weekend to read our review of the film and check the film out.