I remember when I first heard about the new animated short that was to debut in front of “Moana”, I immediately thought about Pixar’s last animated film.

“That’s something we thought about too when we were figuring out the title,” said producer Sean Lurie. He was assigned on that new short that ultimately was titled “Inner Workings” because it literally had to do with the inner workings of our bodies.

“I have two sides to me: my organized side and my free-spirited side,” said director Leo Matsuda to DisneyExaminer in our exclusive early press screening at Disney Animation HQ in Burbank, CA before its world premiere at the Annecy Animated Film Festival in France earlier today. “I wanted to figure out why there were two.”

Matsuda already had a fascination with discovering why our bodies work like they do. “I didn’t grow up with Internet, so I bought a lot of Encyclopedia Britanicas to learn more.” He eventually found that most of our bodily reactions come from two organs: the brain and the heart, which made the perfect main characters for the short.

In the story, those two organs live within the body of Paul, who really was a caricature of Matsuda himself since he had two sides that needed explaining. “I’m half Japanese and half Brazilian, each one brings out my different habits which don’t always get along,” Matsuda said.

The 6 minute and 23 second short goes into that universal conflict that we all feel often in life. The visuals are done through the lens of Matsuda and includes references to his love of encylopedias, the work of great filmmakers like animator Ward Kimball and director Wes Anderson, and his ethnicity. 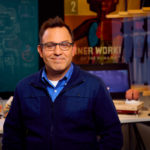 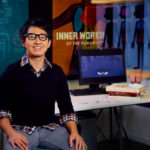 “Toward the beginning of production, Leo [Matsuda] was leaning toward making Paul a normal looking Caucasian guy,” Lurie said. “But John Lasseter pushed him to tell his story in any creative decision he made.”

The result is something very different from Pixar’s feature film and more similar to the life of a Walt Disney Animation Studios story artist whose two sides are pretty similar to those around the world.

Special thanks to the Walt Disney Animation Studios including Leo Matsuda and Sean Lurie for their help on this piece!