“Adventures in Babysitting” is a remake of a 1987 movie of the same name. It is about two girls who take an ordinary night of babysitting into a night that neither of them will ever forget. Sabrina Carpenter plays the role of a studious girl named Jenny who has her own babysitting service, while Sofia Carson plays a carefree girl named Lola who is passionate about her photography. They both want a prestigious photography internship for different reasons, and the two meet while turning in their resumes and accidentally switch phones. Lola, needing money for a parking ticket, decides to take a job babysitting and everything goes awry when one of the kids she is watching decides to go to the city for a concert. Jenny, realizing her phone was switched, tries to make everything right, and that begins their long night. 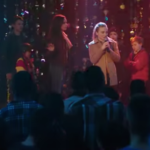 What I did like about this film was that it has great actors in Sabrina Carpenter and Sofia Carson – the chemistry between Sabrina and Sofia is really great. In terms of plot, however, a few aspects of the movie that took away from its success as the hundreth DCOM. For one, it doesn’t really explain what city they are in. The original movie took place in Illinois but this movie just calls it “the big city”. 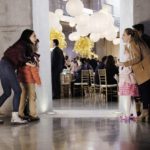 Other small elements like a very catchy theme song also made the film for me – as well as that epic rap battle! 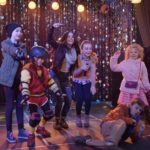 After watching this movie twice, I think it was a good movie for Disney to make their 100th DCOM. It doesn’t have a gimmick in it, such as “High School Musical” using music to progress the story, or “Halloweentown,” which would only make sense to play during the month of October. This movie is a movie I could watch at anytime regardless of what time of the month it was. It’s a relaxing movie that doesn’t stress the viewer and has a lot of fun elements in it – from Jenny and Lola’s rap battle to the way Bobby finds his missing ingredient. It’s a movie that kids and adults alike can watch!

If you missed your chance to watch “Adventures in Babysitting” on television, not to worry! The DVD is out at a local electronic store near you. It also comes with outtakes from the movie as well as a magnetic photo frame! Get your copy today so that you can officially say you’ve watched the Disney’s 100th DCOM.