Disneyland will be the home to construction crews and normal guests through the next 2 years.

In addition to Star Wars Land and the still rumored and the all but confirmed Marvel Land coming to the California Disney resort, new structures will be built to support the guest experience.

Late today, the OC Register reported that Disneyland officials had filled papers with the City of Anaheim saying that they will be constructing a 6,800-space parking structure just across the street from the resort. It will be built on the site of former office buildings adjacent to Harbor Boulevard connected by a new elevated pedestrian bridge.

Additionally, the current transportation hub for all taxis and hotel buses will be demolished and moved to a site right next to the new seven-story parking structure.

Funding for these projects came from Disneyland’s commitment to spend $1 billion after having agreed with city officials to not have an admission ticket tax. Construction on all these structures called the Eastern Gateway Project will break ground in 2017 and is scheduled to open in late 2018.

And 2018 is a target completion date that should be met as that is when Star Wars Land, potentially some of Marvel Land, and the beginnings of a redesigned Downtown Disney District and new resort hotels will open. With all the new offerings opening at a centralized time, it’s only wise that additional parking, public transportation hubs, and walkways are built to support the forecasted crowds.

While there’s a lot to look forward to, it’ll also be interesting to see how the current operations and experience of the resort changes with all the construction. It might all just hark back to the times when construction walls of DCA were rivaling the number of guests who visited on any given day! 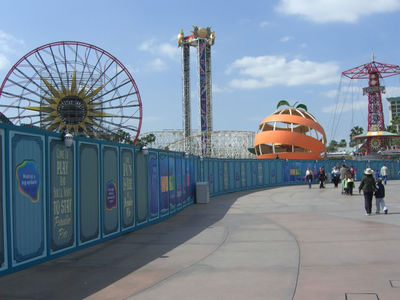