The latest Disney news tells of plans to implement at Disneyland a brand new guest-tracking technology – by scanning your feet.

It sounds weird, but the patent reasons: “Feet are not typically covered and people are typically unlikely to stand in a pose with their feet in a way that obstructs a view of the surface of the foot.”

So, in an effort to track their guests, Disney has decided to focus on feet. This technology would be able to track guest locations and could be tagged with data like names, hometowns, emails, and even favorite foods. The scanner could, for example, make it so that guests could receive their souvenir pictures from attractions like Splash Mountain and California Screamin’ automatically through email.

Beyond simply enhancing guest experiences, however, it’s clear that this technology can also provide valuable information for The Walt Disney Company. With this foot scanner, Disney would be able to see where you go, what you eat, and what you do, and would further be able to find patterns and trends in order to respond to the data they’re getting.

Some, like laist.com, call this kind of data “creepy,” and it is a little weird to think that personal information like favorite foods and emails may be available for a company’s use and that, even more, they’d be using it to benefit themselves. Even beyond simple big brother-vibes, this also brings up the importance of privacy, especially the concern of some like those at Security Magazine have concerning the safety of the data Disney collects. 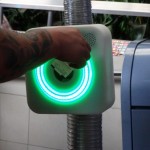 But this type of thinking isn’t new for Disney at all – in fact, it’s proven to be successful in the past. Walt Disney World, for example, has been implementing this kind of strategy for years with MagicBands – arm bands fitted with RFID chips that track locations, are used for purchases and as FastPasses, and can open hotel rooms. Modern and customizable, MagicBands have transcended any safety complaints and have even surpassed the 10 million mark just two years after their official unveiling in 2013.

Even if we still consider the invasive nature of this type of technology, John Foreman of Gigaom points out that many of us willingly give this kind of information online without much thought – perhaps the real issue here isn’t that The Walt Disney Company wants data about us, but rather that we are so willing to give that data out.

In the long run, technology like foot scanners and MagicBands aren’t only used to give Disney data. They’re also used to enhance your experience as a guest. Safety and privacy will always be an issue in the modern world, but Disney seems to be willing to face the difficulties of building up technological tracking systems in order to give you the most fun (and to make themselves the most profit).