It’s tough to find someone in the world who hasn’t been under the spell of Disney music. It’s something that remains with us as much as the animated classics themselves do.

While the likes of Alan Menken write much of the iconic music and Disney-born talent like the Jonas Brothers perform it, the way the music is recorded also helps make each song memorable. The people at Capitol Studios believe that wholeheartedly.

The world-famous recording studios have been a part of some of Disney’s major music projects, including those of Menken, Jonas, and beyond. While Disney has their own label, the Company has used Capitol Studios in Hollywood for much of their recording and post-production work.

“Like all of our clients here at Capitol, I believe Disney comes here because we have terrific sounding rooms…and know our staff will get the job done the best and most efficient way possible,” said Steve Genewick, a three-time Grammy nominated recording engineer at the Studios.

The Studios themselves are located on the first floor of the iconic Capitol Tower in Hollywood, California. The three main studios have played host to a variety of the world’s best artists, both past and present, including Nat King Cole, Frank Sinatra, members of The Beatles, Whitney Houston, and Michael Bublé. 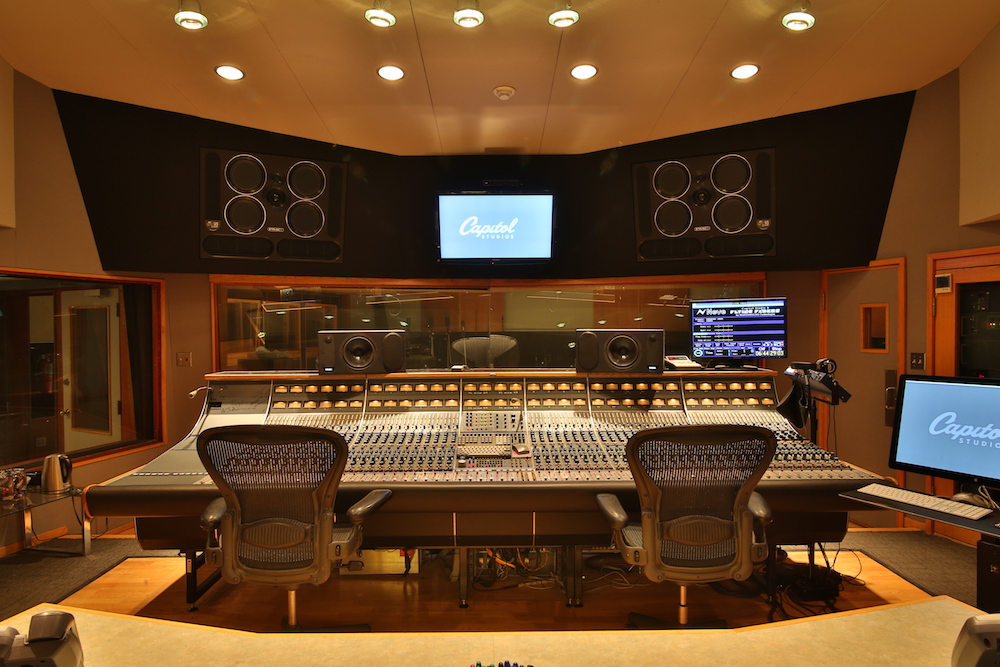 With names like that, it’s no wonder Disney has sought the help of the Studios for multiple decades. Some of the major sessions that have taken place there span across multiple business operations at Disney. Vice President of Capitol Studios Paula Salvatore said, “We initially worked with the Film, TV, and Animation Departments, but our relationship has expanded to include regular work on large-scale, high-profile projects for Disney Parks and its cruise ships.”

Salvatore is a recording industry icon, having worked with names like Quincy Jones, Rick Springfield, Foo Fighters, and many more. In her 25+ years at Capitol, she has helped bring in talent like James Taylor, Tony Bennett, Barbara Streisand, and Paul McCartney, to name a few.

Back in 1990 when Studio A, the largest of the three studios, was opened, Salvatore rallied many major film studios to recording the scores there. You can bet that one of the studios was Disney and they have recorded many of their film scores and music within films, like the songwriting scenes for Saving Mr. Banks. Music for Shanghai Disney Resort’s recent grand opening was also recorded in Studio A.

The adjacent Studio B has also been home to many Disney projects that didn’t require the big sound that the big Studio A can deliver, but needed the same Capitol quality. Disney Channel’s Sofia The First and most recently Elena Of Avalor had their music recorded music in the room.

Studio C is designed to be a place where artists can do vocal overdubs, mixing, and surround sound work. A handful of Disney theme park scores, including some from Tokyo DisneySea, Disneyland Paris, and Walt Disney World found their final sound at Capitol.

Still, the question remains. Why has Disney worked with Capitol Studios for so long instead of working with other recording studios? It all goes back to enhancing and creating that memorable sound.

“If the project calls for a classic ‘Capitol big-band’ sound, we can get that,” said Genewick. “If the desired results are a very modern sound, we can accomplish that as well…” He knew that quite well when he joined Phil Collins to record “You’ll Be in My Heart” from Disney’s Tarzan at the Studios. Collins’ percussive-heavy songs yet melodic string sound made the session “a lot of fun” according to Genewick.

Little did Genewick know that his work would only mark the beginning of the other Disney projects to be worked on. Music for Jon Favreau’s The Jungle Book, Frozen, Doc McStuffins, Revenge, and Lost quickly followed. Then came music for Disney’s theme parks and cruise ships. It was only a few months ago that new music was recorded there for Luigi’s Rollickin’ Roadsters (the attraction that replaced Luigi’s Flying Tires attraction) at Disney California Adventure Park, Frozen Ever After (the attraction that replaced Maelstrom) at EPCOT at Walt Disney World, and Twice Charmed, the Broadway musical that plays aboard the Disney Magic (one of Disney’s cruise ships).

While the projects for Disney have been numerous, some of the most memorable ones, even for the Capitol Studios’ staff, have been the ones that involved Disney’s animated feature films.

Animated Disney films like Aladdin, The Lion King, and Cars all recorded music at the Studios. Salvatore’s favorite session had to be the recording of Let It Go from Disney’s Frozen, which also took home the Oscar for Best Original Song at the 2014 Academy Awards.

Beyond Disney’s official music products, the Disney Channel stars-turned-artists have also used Capitol for their own projects. Robert Vosgien, a Capitol Studios mastering engineer, has worked with Selena Gomez, Miley Cyrus, Demi Lovato, Vanessa Hudgens, and Hilary Duff on their projects that took over the charts.

The results of such music acclaim are due in part to the very high standard that the Studios has had in its now 60 year history. The amazing talent combined with the amazing sound the Studios and the staff are able to produce have gotten the world listening to not just Disney music, but great music that have become among our favorites.

“Disney has some of the most talented people on both sides of the [recording studio] glass attached to their projects, so even when it’s a lot of work, it’s always enjoyable…,” said Genewick.

So the next time you listen to your favorite Disney song, think of the incredibly people it came from, as well as the places that they were recorded at. Places like Capitol Studios are equally responsible for creating Disney memories as Disney movies themselves.

Our special thanks to Karen Webb and Capitol Studios for their partnership in helping put this story together!