Mary Poppins turned 52 just yesterday, and though film doesn’t have an official ride at Disneyland, that didn’t stop one dreamer from taking inspiration from the film to make his own Disney dreams come true.

In an exclusive D23 video, Imagineer and Disney Legend Tony Baxter tells us all about Mary Poppins Jolly Holiday, a concept for a ride he imagined when he was in college. Guests would board carousel horses, which would then jump off their places and take their riders into a show through an imitation London town. The guests and their horses would go through chalk painting, fly onto rooftops with the chimney sweeps, and will end back on the carousel singing “let’s go fly a kite.” 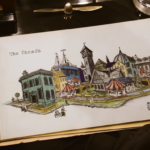 Baxter comments on his early concept art, saying “I loved the idea of this rotating theater, and I thought, what if instead there were theater seats there were horses?”

Baxter’s concept book covers more than just design: in the video he explains how his layouts explain everything – from the mechanics of the ride, to the maintenance locations, to even the addition of the gift shop. 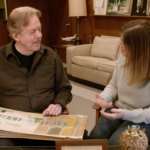 These pieces of concept art are particularly special because they launched Baxter’s career with Disney: it all began when Baxter showed the book to a supervisor at Disneyland, who was able to pass his work on, which eventually led to a meeting with producer Bill Anderson. “So I thought the next day I’m gonna for sure be employed at the Walt Disney Studio” commented Baxter, “but what it was was a really nice pep talk to a kid who needed more training and all that, so they gave me some direction.”

Baxter began his Disney career at 17 years old as a Main Street U.S.A. ice cream scooper, but with some determination and some inspiration from our favorite nanny, he was able to turn his visions into concept art, and his concept art into a successful career. His story is an inspiration to all aspiring Disney creatives (and maybe one day we’ll get to see the Jolly Holiday concept art come to life in a real ride!)