Chances are that you don’t know what new stories that the Walt Disney Animation Studios will tell next. Rarely does anything leak from those storied walls, but every so often we do get a glimpse of future films.

Back in early 2014, one of those rare leaks came through when Disney animators posted some “fan art” of what some thought were hints to new films. Those that stood out were the ones that pictured a girl.

While no descriptions of the girl or any of the photos were given, the picture began to circulate and rumors began to form. Was she going to be the next Disney princess? Was it all just fan art?

It wasn’t until a few weeks later that the Mouse opened his mouth and revealed that everything that we saw up until that point was indeed real. Moana was going to happen.

While the press release announcement in 2014 didn’t specifically state it, this film was to be the first Disney animated film to feature a Polynesian princess. It would also be the first film led by the iconic storytellers and Disney Animation veterans John Musker and Ron Clements since directing the studio’s last hand-drawn animated film The Princess and the Frog. It was a film of firsts in many other respects too, probably because it’s debuting at a time when there are many discussions about gender and race happening in the world.

Much of the world’s dialogue is reflected in the way that many people are looking back to their past in order for us to move forward. Moana’s central story follows that logic, following this Disney princess’ journey to find the roots of her family and her village.

“It’s really a story about tracing back your roots and finding your identity inspired by what you see in that,” said Moana’s co-director Musker at the long lead press day for the film a few weeks ago. “It’s an inspiring thing knowing you’ve been shaped by your past,” added co-director Ron Clements. “I’m hoping that our past as a studio can help inspire our stories and those who’ll experience them.” 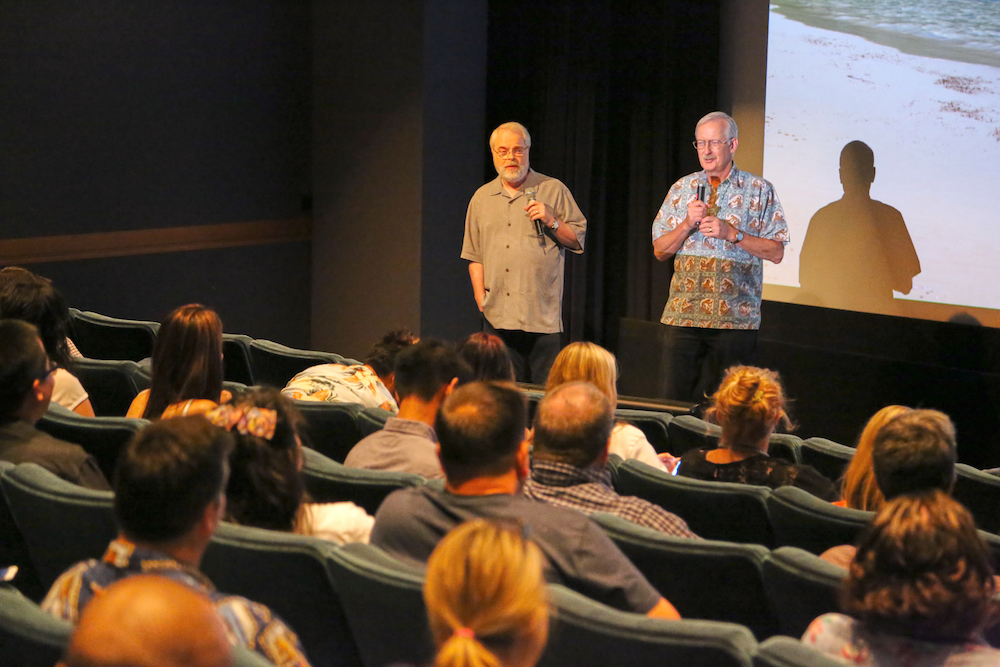 Before we experience the film, though, Disney once again invited us and a few select press outlets to come down to their studios in Burbank, CA to learn more about the upcoming film. Even while the leaks and the official announcement might have done a lot to get the world excited for themes of the new movie, they also had us asking: what exactly were those things in detail?

We spent the majority of the day at Disney Animation’s Tujunga campus right outside the Burbank Airport. While we weren’t going on a plane to the Pacific Islands, Disney Animation staff and animators did a great job giving us a sense of that tropical world.

The decorations and art throughout the airplane hanger-turned-studio reflected the inspiration that influenced animators and producers to tell the most authentic story possible. Since Moana’s story happens 2,000 years ago in ancient Polynesia, each room we visited contained visuals of the tropics and storyboards of the characters and settings they inspired.

It was only fitting that we started our day by finding out who Moana is as a character. She’s been widely considered Disney’s newest member of the royal lineage, but it was a unique challenge to try and define that against the setting of the story.

“We wanted to make [her] feel like she came from Disney, but with her own personality,” said Bill Schwab, the art director for characters on the film, about Moana. While many of the artists had been working for Disney Animation for decades, many of them still needed to know how people and the Pacific actually looked. 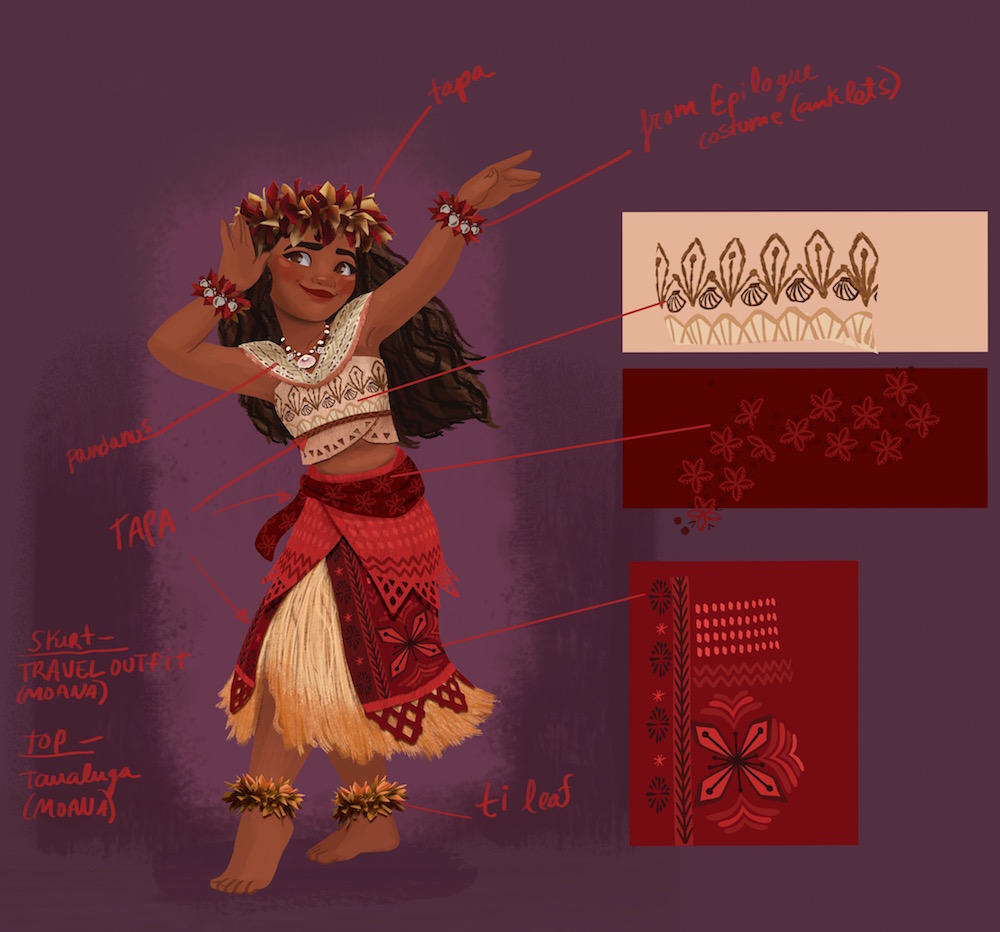 To do so, Disney utilized a major part of their production budget to go on a few research trips to the islands in the Pacific to meet the people. Many photos were taken of those people, each one with a different traditional outfit and body features. Those photos helped make Moana herself an authentic person in the film.

From her royal outfit filled with feathers from birds native to the islands to the ancient designs on her every day dress, these elements should erase any doubt as to where Moana is from.

In addition to identifying the look of the characters, research trips were taken to help create the islands that make up the setting of the film. On a few of their 13 total research trips to islands like Samoa and Fiji, the Disney Animation teams also went deep into the land to capture their look.

Production Designer Ian Gooding said that over 10,000 photos were taken of the various islands, most of which were pictures of different rocks, plants, trees, and even sand on the beaches. “We probably didn’t leave any stone unturned while we were there,” he said. 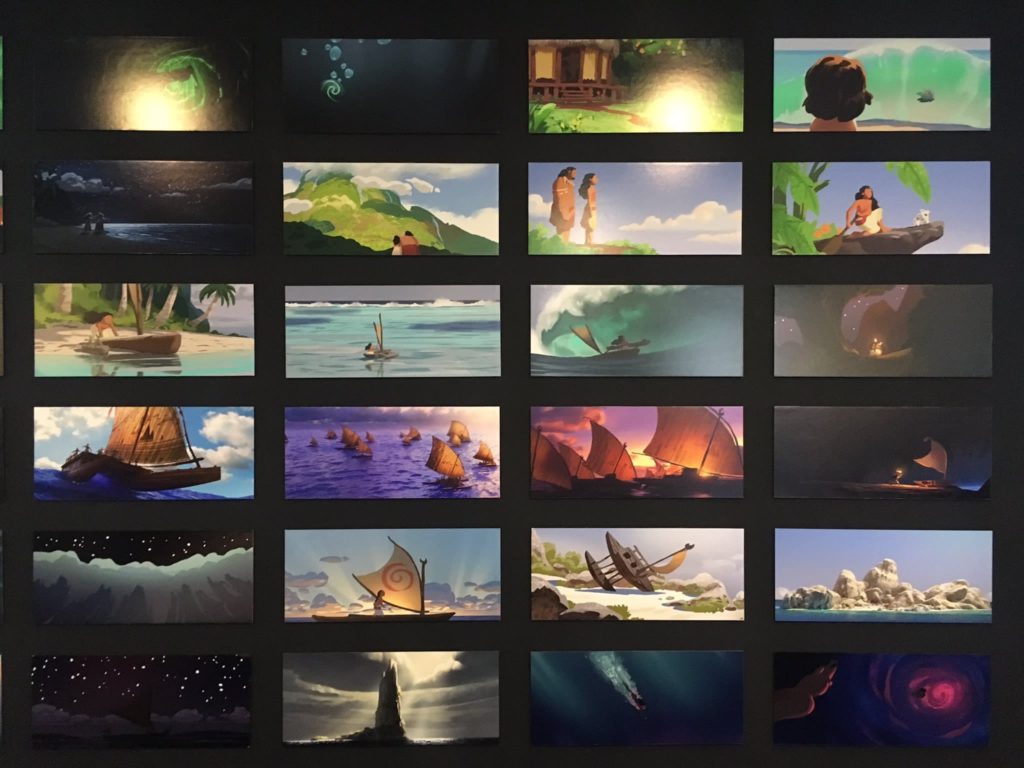 With real inspiration in their minds, production designers created the main island, Motunui, as well as the other islands the characters embark to within Oceania. They digitally scanned a scale clay model so that they could fill the environments with those same plants, rocks, and trees that they found on the real islands.

With all of the focus on accuracy that went on behind the scenes, you should be able to get a firm grasp on how the islands of the Pacific really look like when you see their animated counterparts in the film.

The islands were only one part of the setting; the other major part was the water. The open ocean is where much of the film takes place, so Disney artists needed to make sure they got their version of the Pacific right.

That’s where a majority of the visual effects team’s responsibilities were carried out. Inanimate objects like water and lava are actually characters in “Moana”, so extra work and consideration were needed in their creation. 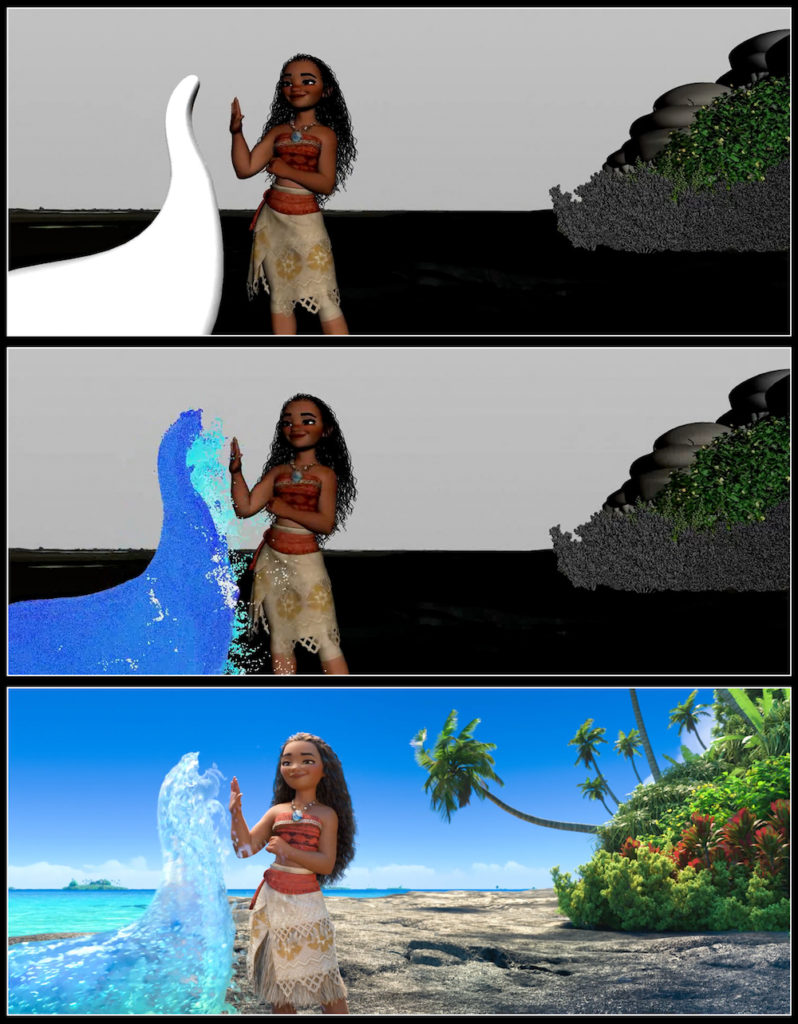 “Water has a unique look to it and is reactive to many things. All this that made creating water out of 1s and 0s in a computer all the more difficult,” said technical supervisor Hank Driskell.

New software was created to mimic things like splashes and light reflections in the film. The results were stunning: the small test footage they shared looked so real that you would think that it was a video recording of water.

The lava character, named TeKa, is actually the main antagonist in the film, but that didn’t lessen the pressure on the visual effects team to make the lava a believable and scary character. The first footage that showed TeKa proved the power of what visual effects can do to accent a story, and how it can turn make-believe into something we think is real.

That distinction between real and unreal was also blurred in other aspects of the film.

The research trips gave the creative team an understanding of the culture of the people in the Pacific. Like Disney Animation’s mantra of telling stories, the Pacific Islander culture is steeped in mythology. One of their main mythological figures is named Maui.

You might recognize the name as an island in Hawaii, but Maui also represents the half human and half deity that plays a larger-than-life role in the story of Moana. While each real island has its own interpretation of who Maui was, the one that Moana meets in the film takes elements from each myth and puts them together. 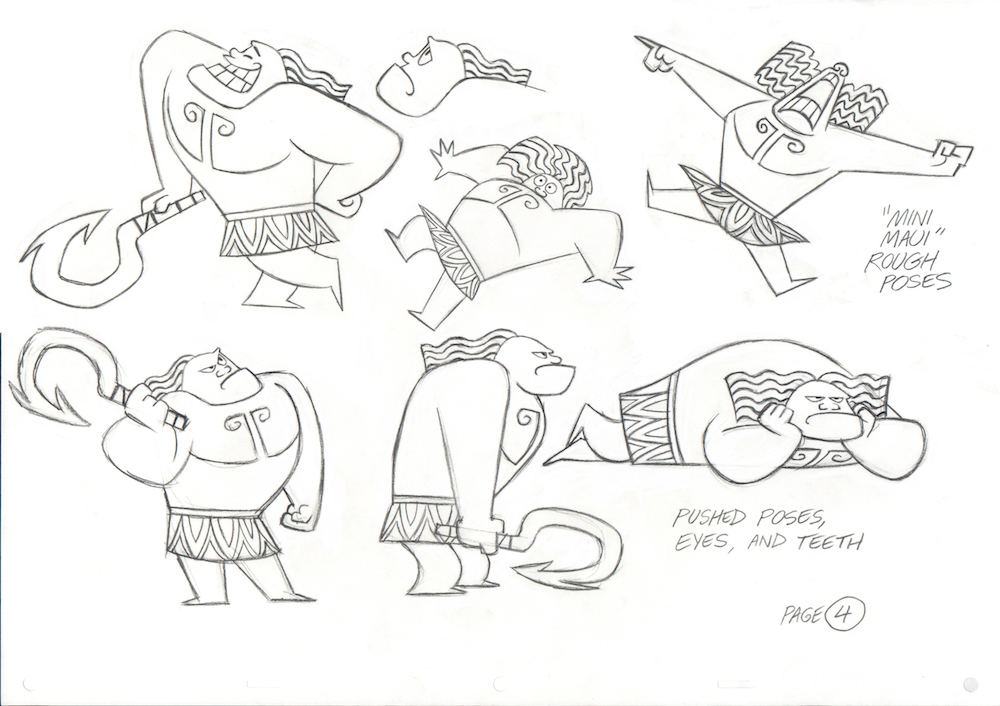 Maui’s was voiced by Dwayne “The Rock” Johnson, an equally larger-then-life person who delivered solid performances according to Head of Animation, Hyrum Osmond. “We were looking for someone muscular and over-the-top to give Maui life. It was easy for us to incorporate so much reality into him because Dwayne was everything he was,” he said.

The reality and authenticity of Maui and other elements of the film can be directly tied to the center of every Disney production—the story.

Before production began, the story of Moana started with director John Musker’s passion for the world of the Pacific Islands. Once he pitched it to the Disney Animation leadership team, it was the job of the writers and storyboard artists to help develop a feature-length story. 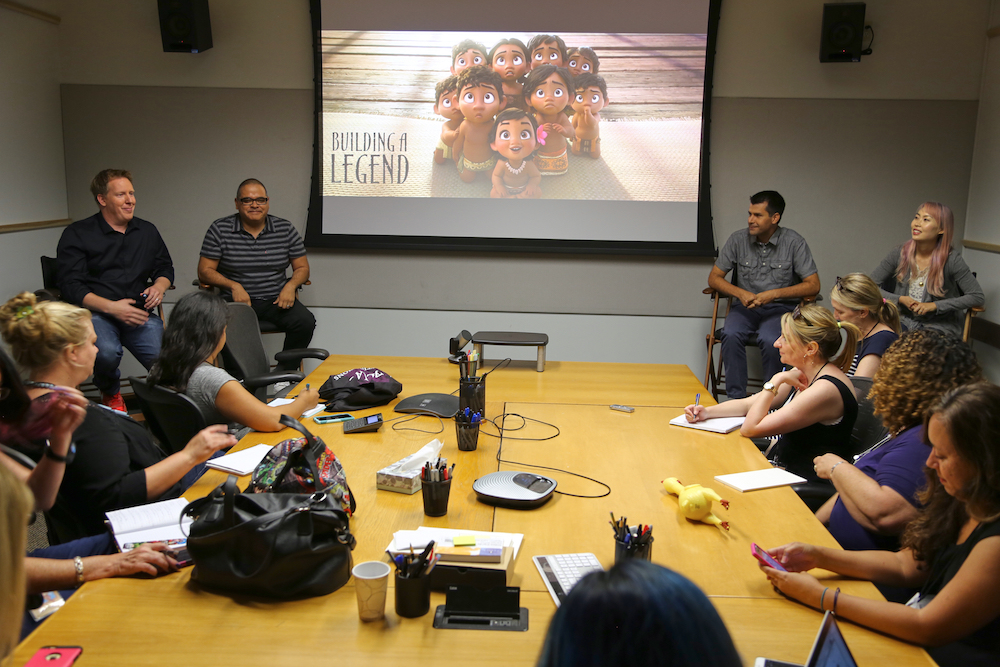 Screenwriter Jared Bush, who was fresh off his work on Zootopia, joined the team a little later after production began, but still developed the core of the story that relied heavily on the research that the teams brought back.

Like any good story, each draft was openly criticized by everyone on the production team, all of whom were encouraged to offer up their notes. “Whether it was the way we had Moana run or the things she said, we took it all into consideration because we collectively want to tell the best story possible,” Bush said.

– – –
It took nearly 5 years for the story of Moana to be completed. In that timeframe, 13 research trips were taken, over 10,000 pictures were taken, approximately 13,000 hours were worked, and the movie was screened internally 12 times where hundreds of people gave feedback that ultimately turned into thousands of revisions.

Much was given to create the film, and it just wrapped production a few weeks ago with Disney’s veteran directors John Musker and Ron Clements smiling from cheek to cheek. I’d argue that their smiles and their crew’s elation came because they were pleasantly surprised at the final version of the film.

It was a surprise to the world that Disney kept Moana a secret for as long as it did, even with the leak. Fast forward to today, with the film’s impending release in November, and the everyone is still eager to see what the film will end up showing us and making us feel.

After attending the press day, I was reminded how authentic Disney can be with their storytelling and how much time and dedication was they take to make it right. 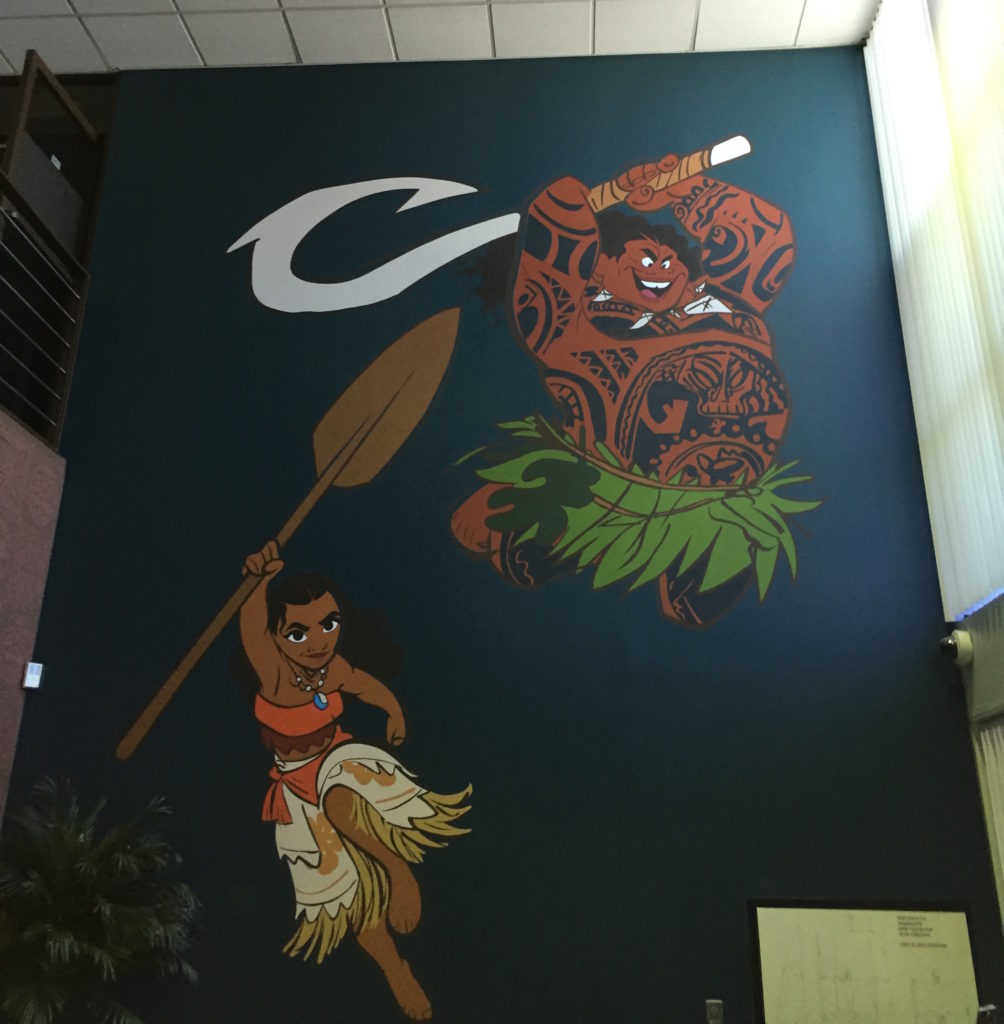 Even I have no true compass to lead me to how I should feel about the film yet. After seeing the first 13 minutes of it, I’m still left with questions that I’m sure won’t get answered until I see the final film. And you and I should be happy that Disney is keeping the questions unanswered – we’ll be surprised with a story that was pushed to its limits in every way.

“Our movie is very much like the ocean,” director Clements said while looking at the ocean in Samoa. “It tends to pull you in and then like a crashing wave, it surprises you.”