Disney is not usually associated with war, death, and unhappy endings. Rarely do we see the company producing something that leaves audiences with a sense of helplessness.

Yet ABC News and Marvel have come together to produce an digital comic called Madaya Mom, which tells the true stories of a family living in the Syrian town of Madaya – and it’s incredible, real, and heartbreaking at the same time.

Because of the political chaos going on, especially with the U.S. Election looming nearer, I went into Madaya Mom expecting something persuasive, even obviously politically biased. What I got instead was a powerful story straight from a real mother, called Madaya Mom in this story, living in Syria with her husband and five children, a story that described their hunger, pain, fear, and inability to fight back against circumstances that go beyond their village of Madaya. 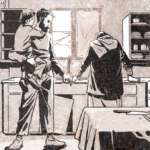 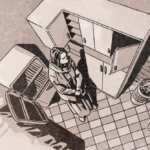 The comic is told through detailed illustrations of Madaya Mom’s interviews through texts and phone conversations, and takes the audience into the story right away, opening with Madaya Mom’s description of her family’s struggle to adapt to scarce food supplies and gasoline prices rising up to $90/gallon U.S. dollars. Madaya Mom isn’t afraid to tell the realities of war, revealing the way children are starving, schools are bombed, neighbors are attacked, and family members are brutally killed. Yet at the time time Madaya Mom’s voice comes through and tells us about what it means to be human through all these experiences; you’ll see her hopes and dreams for her children, her love for her husband, and the sacrifices she makes for her family.

Amidst all the political chaos the world is now facing, Madaya Mom shows what it’s like to be a single person, a single family, stuck within a conflict of power. This story is not only beautifully told, it’s also incredibly important because it is, in fact, real in every sense of the word. I hope that the issues will continue, but even more that this work will contribute to the efforts made to make sure stories like this will no longer have to be told in the present tense.

You can read Madaya Mom on ABC News now, and read more about how the correspondence between Madaya Mom and ABC News.