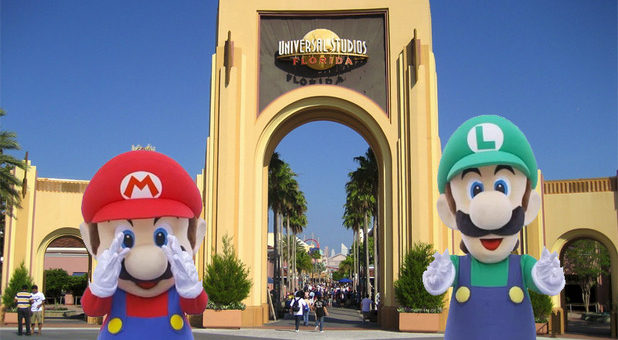 Universal Studios announced yesterday that they will be expanding their theme parks with help from the people at Nintendo. The Japanese consumer electronics and software company known for its video games and consoles have agreed to put their most famous characters and worlds into three of Universal’s parks, including the one in Hollywood.

“Imagine the fun of stepping into a larger-than-life Nintendo adventure.  Gigantic Piranha Plants spring to life.  Question blocks, power-ups and more surround you,” the announcement stated. “And Mario and all his friends are there to pull you into a brand-new world.”

And by world they mean a very “expansive, immersive, and interactive” world, promising that “guests will feel as if they are playing inside their favorite games – this time in real life.”

If this sounds all too familiar, that’s because it is! Disney has been doing the same thing for decades. It’s actually their core business model: create amazing films to then take those worlds and characters and turn them into consumer products. That includes theme park attractions.

Even while they’ve had Universal Parks since 1964 with their Hollywood location, all of their offerings were centered at giving people an informative and entertaining look at how movies were made, not to put people into the movies. But that’s what people want now! The Wizarding World of Harry Potter was the start of Universal’s first jab at turning their business in that direction and has seen some success.

Still, the amount of Disney’s IP and multi-year plans pale in comparison to Universal’s, especially with Star Wars. But that will all soon change. Let’s remember the recent purchase of DreamWorks Animation earlier this year and Universal’s internal strategy teams revealing further that they are hungry to work with more content creators to fill their parks.

Universal did not state when the Nintendo lands would open.