The Walt Disney World College Program is a unique experience that brings students from all over the world together. The program is excellent, but may present unique challenges to young students that may feel lost or afraid – but one life group is trying to change all that.

What started as Brittany Kelley’s mission to reach College Program students has now turned into a successful college ministry that connects students with each other, provides a safe space for discussion, and creates a sense of belonging for those who are searching for a community.

The Disney Parks Lifegroup doesn’t just discuss the Bible together – they also dedicate time after each study to fellowship, often riding attractions at Walt Disney World together after their studies. The life group is also dedicated to building community outside of Walt Disney World, and connects its members with other outreach and community opportunities through the church that supports them, First Baptist Orlando.

I had the privilege to speak to Brittany Kelley, the former College Program student who started the group, to learn more about what the life group stands for, how it began, and what impact it hopes to make on the Disney community.

Kelley first felt the call to begin the Disney Parks LifeGroup when she realized that there weren’t any programs that catered specifically to College Program students and their experiences. “I was just praying one day and the Lord just really convicted me on that, that you know what, nobody’s going to start a ministry to reach out to CPs, then – if you don’t start it nobody’s going to,” she recalled.

At that point Kelley was working for First Baptist Orlando’s college ministry, and they reacted positively to the idea of a Disney life group. Since then, the group has been tied to First Baptist Orlando, and Kelley was eager to share how much the church has supported the members of the group. “Our church has been extremely responsive to it, and it’s a huge ministry at our church too,” she explained.

Though Disney and faith may not mix too often, Kelley and her team found that forming a life group was incredible easy. “Disney has not been an issue – actually, it’s been the opposite,” she said. “While we’ve been meeting a lot of times we’ll have cast members or guests walk up to us and say, ‘you know, I think what you’re doing is really incredible and I think you should keep doing it.’ So I really think it’s been a God thing that, you know, nobody has said anything to us or had an issue with it.” 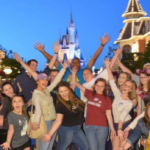 What does the group do?

The Disney Parks LifeGroup lives out its faith by doing much more than simple discussions. Kelley was sure to explain the ways the life group has become part of a bigger community-building effort.

“Since the Disney ministry is not just its own thing, we are a part of First Baptist Orlando, so really I would say the majority of the CPs that come to the Bible Studies, the life group, are also part of the college ministry outwide,” she said. “And the college ministry is anywhere from Disney people, to UCF students, to Valencia students, to students that just live in Orlando.”

These different groups create connections that go beyond the Disney Parks LifeGroup. “Our college ministry also has a night called Anthem and we all get together and worship with music and to hear a message from our college pastor,” said Kelley. “And from that, I mean, we do mission trips together, we do help out in the community, and things like that. So the Disney people aren’t just a part of that one night, they’re a part of everything we’re doing at First Baptist Orlando as well.”

The group has also started a new project: a bus ministry to help College Program students who don’t have access to transportation. This unique bus ministry provides rides to college students who may otherwise be unable to attend these community-forming groups and their events.

From sharing rides, to joining mission trips, to simply helping each other through life’s ups and downs, this Disney Parks LifeGroup goes way beyond simple discussion.

Who can join the group?

It’s for this reason that Kelley stressed that the group is for everyone – not just Christians.

Kelley stressed how easy it is to reach her and their college pastor through the phone, online, or even through social media. She was eager to share her own email, and can be contacted at Brittanykelley@firstorlando.com by anyone who’s interested in learning more about the Disney Parks LifeGroup. 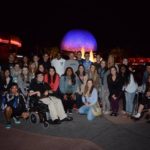 What does the Disney Parks LifeGroup stand for?

Kelley’s final thoughts on the Disney Parks LifeGroup emphasize not only their faith, but their readiness to reach beyond into the wider community.

Kelley then went on to stress that the Disney Parks LifeGroup goes beyond the bounds of the park: “I don’t want this to seem like the Disney LifeGroup is its own thing, we are a ministry a part of First Baptist Orlando, and that we report to us, because we want people to know that we’re not our own little parachurch, we are a part of the church at wide and what the church is doing here…”

Kelley’s final words encourage anyone who is interested to join the group. “And I will say that it is for everybody, and anyone who wants to come is more than welcome.”

The Disney Parks LifeGroup is active in Walt Disney World as a space for community, learning, and faith. Whether you’re a person of faith, are looking for support as a member of the College Program, or simply want to spend more time with kind, community-minded people who love Disney, this group is for you.