Over 5,000 miles away and 6 months ago, a new Disney resort emerged from the barren grounds near Shanghai, China. I remember watching the live-stream of the grand opening gala concert and the dedication ceremony the following day, and can still recall the immense desire to go and visit.

I and the rest of Team DisneyExaminer were so excited to cover the grand opening activities that were happening, but at the same time, we wanted to capture the spirit of the new park “when no one was watching.” As most of you know, we pride ourselves in being able to write about how we feel without being influenced by an outside party like Disney.

It just so happened that they didn’t have space to accommodate us at the grand opening and that we had other coverage opportunities that we committed to that prevented us from going. Until now.

A few weeks ago, I found myself and my family on a flight from Los Angeles to Shanghai to visit the resort. It was incredibly exciting to be able to one of the first few in the world to step foot inside and ride world-famous attractions. At the same time, however, we were a little intimidated: shortly after the resort opened to the public, many posts were surfacing online featuring a very different look at what goes on inside the newest Disney Park. You might have seen some of those posts that included videos of park-goers littering, vandalizing, cutting lines, and even urinating in public.

Granted, it was the first time that people in Shanghai were getting a major theme park in their area, but it was incredibly strange to watch from the point of view where that behavior would be considered rude or just plain illegal – even at a Disney park. A few sources told me a few months ago that the misbehavior was happening because of the newness of it all, in addition to the socio-economic wars that are happening between people from new and old Shanghai.

I’m sure that I wasn’t the only one concerned about how that “war” would affect my visit, but like many others, it wouldn’t deter me from visiting the new park at least once. So, I did. 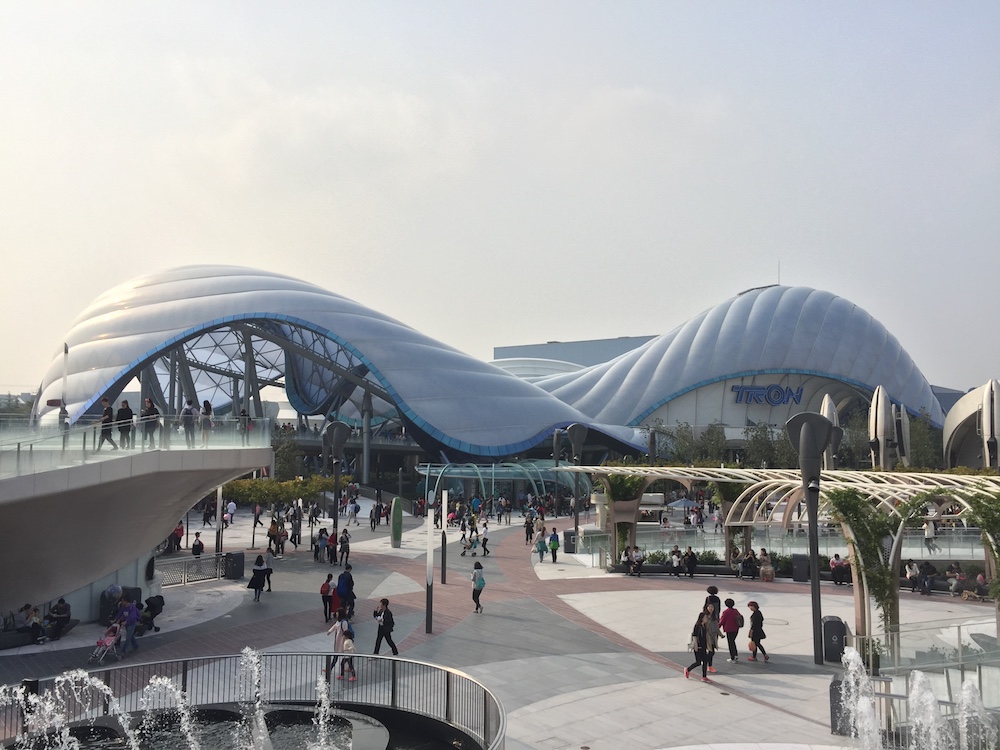 (Full disclosure: The kind folks at Shanghai Disney Resort did give my family and I complimentary tickets for two days to the park, but we weren’t given any instruction on how I should share my experience.)

As our previous articles have stated, the entire resort is quite large. To put it into perspective, Shanghai Disneyland alone is actually 11 times the size of Disneyland in California. Add in the adjacent Disneytown shopping/dining/entertainment center, the two resort hotels, and a massive man-made lake, you have an area that’s larger than New York City’s Central Park.

You’d assume that a park that large could fit a lot of people, and you’d be right. From the large brick-laid entry area with the Mickey floral to the actual queues for the attractions themselves, everything just screamed large to accommodate the Chinese populous. Even with all that space, though, the park felt crowded.

We ended up visiting on a Friday and Saturday, where Friday seemed less crowded and wait times averaging around an hour. Saturday was entirely different, with many more people visiting with us and wait times hovering around two hours for the major attractions. While the wait times weren’t an issue for us “seasoned” Disney Parks visitors, we braced for the thing that we were concerned about from the beginning: the culture shock.

The reason Saturday was so much more crowded was because it was the weekend, which brought many more locals who either were passholders or were ready to complete their first visit. Unfortunately, the culture that some of those locals brought into the park unintentionally challenged our experience of the park from a western perspective.

In one instance, we had a person willingly and openly cut my dad in line while we were getting FastPasses for an attraction. That was quickly followed by a young girl urinating in a storm drain in a public near Tomorrowland. And right before the nighttime fireworks, we were pushed hard from behind, nearly displacing my mom into an open walkway. And the uncovered coughing, sneezing, and spitting – it was intense.

Before you start second-guessing your future visit, let me remind you that these were just a few isolated incidents that happened for the same reason that our sources at the resort shared. Experiencing a Disney Park was just as new for those some of those locals as much as it was for me, and the park is not immune to the socio-economic cultural wars taking place outside its gates. While I do give the benefit of the doubt that many of those people who acted in such a way didn’t have an agenda to make us part of their cultural war, I’d be lying if I didn’t say my visit wasn’t affected by their actions.

But that’s just part of the experience. 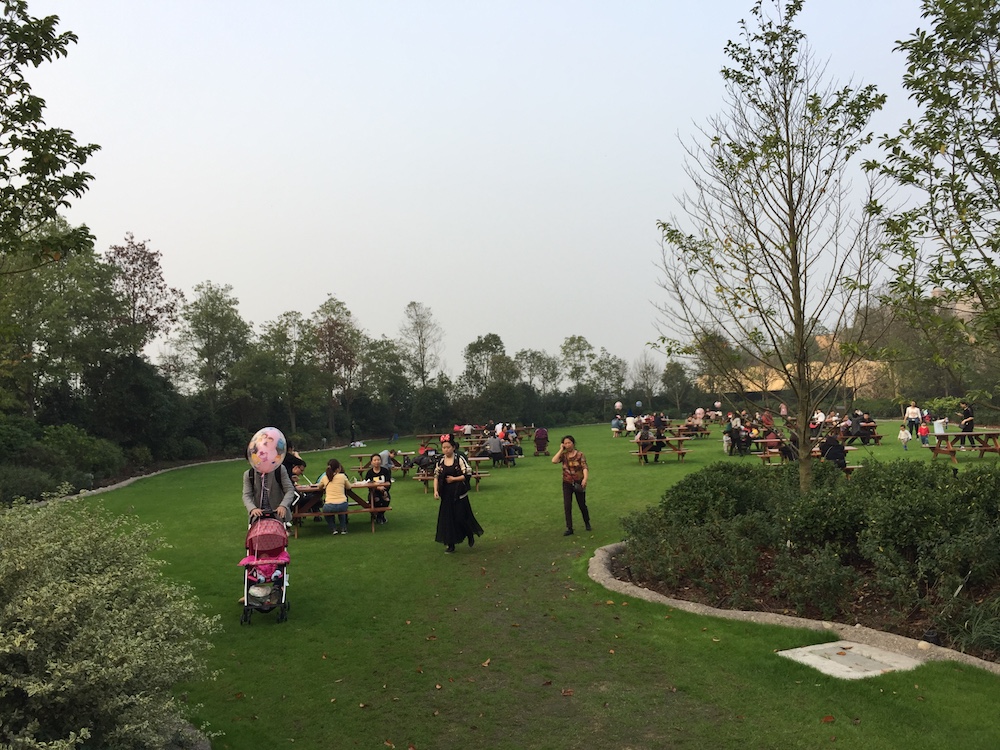 One of many public “parks”

While each Disney Park is different in its offerings, one thing is common: the diversity of the many people who visit. Those people have their own culture and their own way of doing life, and you can bet that the last thing that a multi-national company like The Walt Disney Company wants to do is to be a mediator between what’s culturally appropriate, especially in a place that was created specifically for people who define living and interactions between people in their own way.

I think we forget what Walt Disney meant when he said that Disneyland (and in turn all future Disney Parks) would be “a source of joy of inspiration for all the world.” Yes, the attractions and shows are source of happiness, they are a source of happiness for everyone no matter who you are or where you hail from.

As much as Shanghai Disneyland is another perfect example of Disney’s business strength to enter a new market and make more money, it’s also a dream realized for the Chinese people, many of who regularly took long flights to visit the Disney Parks in other countries. Now that they have their own Disney Park with some of the most innovative, larger-than-life offerings like that Tron coaster and Pirates of the Caribbean attraction, don’t expect the crowds to die down there anytime soon.

Nevertheless, crowds and their unpredictable behavior didn’t ruin my visit to Shanghai Disney Resort, nor did it deter me from visiting again. Call it learning a new culture or respecting people’s mannerisms, you’ll never find a Disney Park devoid of people who’ll act the way you’re used to (and in ways you’re not used to). The Parks are all places where people from around the globe meet to have fun and “make memories,” regardless of culture.

If you can’t handle some troubles on your visit to a foreign place, you might just want to enjoy your local Disney Park or watch YouTube videos of all the things that your non-local Disney Parks have to offer. 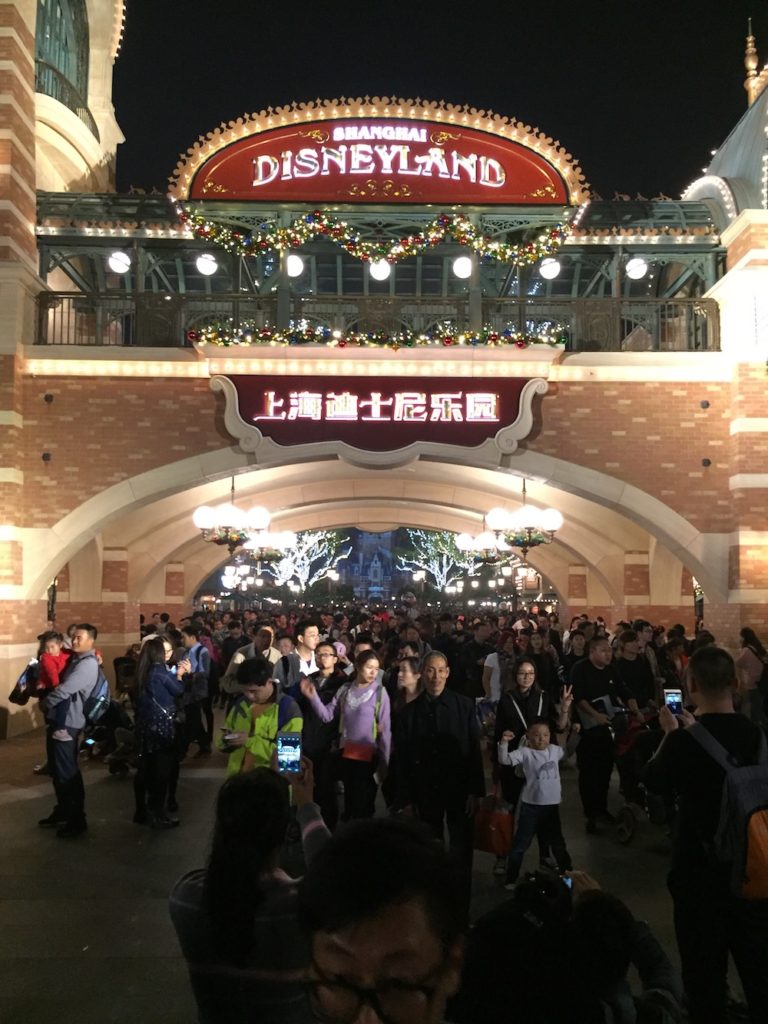 If you can handle the crowds and their foreign personalities, I promise that you won’t be disappointed. Shanghai Disney Resort is a very special place with very special experiences that really can’t be had anywhere else. Seriously, that Tron Lightcycle Coaster and Pirates attraction! And food like Minnie Mouse-shaped red bean buns. Oh, and a Toy Story Hotel. Did I mention that Tron coaster already?

It was just a few weeks ago that I was in Tokyo and the week before that, in Shanghai. The friends who knew me called my bluff about leaving the country to flee the impending Trump presidency and assumed that I was fleeing America for a more fun reason.

They were right. It was time to visit two Disney Parks in Asia, Shanghai Disneyland and Tokyo DisneySea. While they are both located in the relatively the same geographic region, they are two very different parks. It took an actual visit to each one in order to come to that conclusion, though, and that’s something important to know.

I’ve never been outside of outside of North America, let alone have never traveled to an international Disney Park until this experience. I grew up on Walt’s original park in Anaheim, so I really was going to experience the product of a familiar brand in an unfamiliar place. But while it was all intimidating at first, I really came to appreciate not just what I have a 30 minutes away from me in California, but what magical and less magical things were happening over 5,000 miles away.