Still can’t get over “Rogue One”? It’s probably because of all the nostalgic and emotional ties to the Star Wars films of the past that kept your mind reeling after seeing the first standalone film from Lucasfilm. Among the many, it was probably the Death Star’s “revival” that stuck in your mind the most.

Sure, it’s an iconic piece of evil technology, but that was just in the movie. For you, the avid Star Wars fan, it can be anything you want it to be. Like a loudspeaker. That levitates. And spins.

The folks over at Plox thought about the same thing and decided to really create a gravity-defying Bluetooth speaker in the shape of the Empire’s secret destructive weapon. Just connect any audio-emitting device to it wirelessly and play all sorts of music and movies you’d like and have the Death Star fire that audio wherever you are.

It’s not a portable solution, but it will prove to be a novel solution for any room in your house or at your office and fills the room with enough sound. All you have to do it plug in the “base station” to any regular power outlet and begin the process of getting the Death Star speaker into position over it. It may be a little tricky to begin levitating the speaker, but Plox included an easy funnel tool that will allow you to put it into position more easily.

Overall, it’s a great sounding speaker that any Star Wars fan would want. Just make sure no one steals it from you, or you “may fire when ready.” 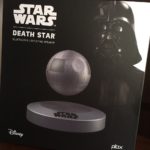 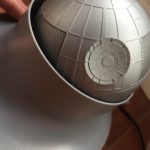 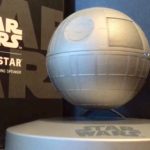