Pop culture will meet Disney classic this March when multi-platinum artists Ariana Grande and John Legend lend their voices to the title track for the live-action adaptation of “Beauty and the Beast.” Grande and Legend, two pop artists currently with great influence on pop music, join the cast to perform a reimagined version of the hit song from the 1991 animated version of the film.

The original ballad for the 1991 film, sung by Celine Dion and Peabo Bryson, is being remade by Grammy winning veteran Ron Fair, whose credits include the soundtrack for “Pretty Woman” and hits like Vanessa Carlton’s “A Thousand Miles” and Christina Aguilera’s “Beautiful.” “Ron was the first and only choice to make this particular record,” says Michael Lieb, Disney’s president of Music & Soundtracks, in a press release. “No one is a better vocal producer and he also has a great understanding of the filmmaking dynamic.”

This update on a classic will also be recieving a brand new music video directed by Dave Meyers, who has directed movies for major artists such as Britney Spears, P!nk, and Mick Jagger. Meyers is no stranger to Disney films: he also recently directed the music video for P!nk’s “Just Like Fire” from the soundtrack for “Alice Through the Looking Glass.”

The news of Grande and Legend’s inclusion in the film has been met with largely positive reactions: 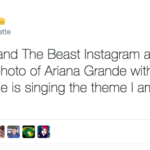 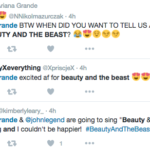 But of course, only time will tell if this new take on “tale as old as time” will live up to the older versions.

Catch Ariana Grande, John Legend, and many other talented figures in “Beauty and the Beast,” out in theaters on March 17, 2017.