Earlier this week Disney released a brand new trailer for the new show “Tangled: The Series” and we couldn’t be more excited! First officially announced summer 2015, the show is finally set to premiere this year.

Here’s what we know about the show so far!

The series premieres with a brand new movie called “Tangled: Before Ever After” 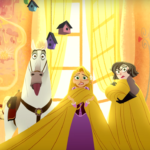 That’s right – not only do we get a series, we also get another movie! The teaser trailer reveals that this prequel to the series will introduce us to new characters and will explain why Rapunzel has her magical blonde locks again. 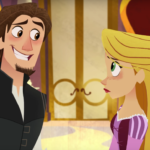 Also returning will be Pascal, Maximus, and the Snuggly Duckling thugs. The series will also give voices to Queen Arianna (Ashely Judd) and King Frederic (Clancy Brown) 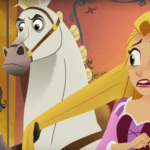 One of them will be Cassandra, “a strong-willed handmaiden” who becomes Rapunzel’s confidant.

The show will be created in 2D animation 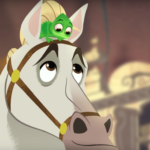 It’s interesting to see a movie go from 3D to 2D, but the art looks as wonderful as the original film so far!

Composer Alan Menken and lyricist Glenn Slater, who created the music for the original film, will also be creating new music for the series. 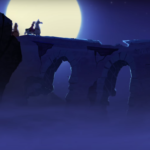 Perhaps we’ll see another rendition of “I See the Light”?

The series will take place between “Tangled” and the “Tangled Ever After” short. 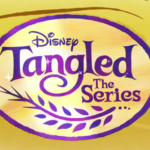 No premiere date has been announced yet, so keep an eye out to find out when you’ll be able to enjoy this brand new show (and movie!)