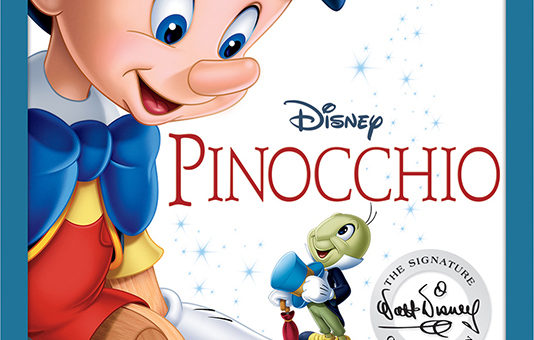 I always look forward to seeing Disney classics released from the Disney Vault. Even though many releases for home entertainment don’t add any value besides the special features and movie accessibility, there are some movies (and the ones I look forward to owning) that add an even greater value.

One of those movies showed up on my doorstep just a few days ago – Disney’s Pinocchio. The fairy tale that tells the story of a puppet becoming a real boy was the second feature animated film that Walt Disney and his team of animators created. After the success of their first film, Snow White and the Seven Dwarfs, that came out in 1937, Walt set out to create an even better film powered by new technology and greater visual detail.

While they might not have known it at the time, that aspect of greater detail wasn’t seen as much in their first viewings. The projection technology back in the mid-1900s couldn’t have shown off the fine drawings of characters and buildings. Each one of Walt’s films were works of art created by master artists from nearly every field that not seeing that detail has always made an enthusiast like me really sad.

But thanks to today’s technology, Disney has done amazing work at taking animated classics like Pinocchio and giving them a digital second-life. Disney didn’t just gain an ability to resell the movie, but we, the audience, just gained a better viewing experience in having a film turn digital. That experience means crystal clear pictures, colors, and even graininess to give authenticity.

The appropriately stamped Walt Disney Signature Collection edition of Pinocchio has all of that, giving a vivid viewing experience that will either renew your love for old animation and probably even the classic fairy tale story. Combine that with the curated set of bonus features like Walt Disney describing the process of making the film with vintage footage of the studio and you have a true treasure from the Disney Vault all packed into a Blu-ray disk.

Disney’s Pinocchio is now available in stores and online and is part of Walt Disney Signature Collection Edition that already includes Snow White and the Seven Dwarfs and Beauty and the Beast.