The popularity of “Newsies” is a little strange – based on a true story, the film starring Christian Bale was made by Disney in 1992 and was a commercial flop, ranking as one of the lowest-grossing live-action films by the Walt Disney Studios.

Yet despite the floppiness of the first “Newsies” movie, Disney decided to bring the film to the stage, and in 2011 “Newsies” the musical premiered at the Paper Mill Playhouse to thunderous applause. The Newsies fanbase only grew more as the show moved to Broadway from 2012-2014, and then went on national tour from 2014-2016. Fansies, as the fans like to call themselves, can now be found all over the world, touting praises for the admittedly physics-defying choreography and catchy showtunes from this musical. And now, in an ironic twist and just after the end of its national tour, “Newsies” is being released as a filmed version of the live performance.

It may seem strange to see a true story go from the screen to the stage and back onto the screen. But the popularity of “Newsies” rests on the story as a production rather than a film, so it may make sense for Disney to capitalize on this popularity by re-creating the movie in production form.

The idea of a filmed-live performance isn’t new itself – NBC’s “Hairspray Live”, for example, earned a number of viewers – but this screening is especially unique for the way it brings the stage and the screen together. This joining of two aspects of “Newsies” resulted in great successes – as well as a major miss. 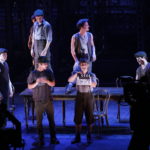 What worked in “Newsies: The Broadway Musical”

Alternate perspectives are lost when seeing a performance live, so it was wonderful to see that the creators of “Newsies Live” really took advantage of camera angles. Rather than simply recording the show head-on, this filmed version takes you all around the stage so that you feel like you’re a part of the show.

Different angles also give us views of things we might not think to look closely at: different characters’ shoes, what their dances look like from above, different facial expressions from background characters. This performance was filmed like a movie, and I believe it was effective towards making the final cut exciting and fun.

This is obviously the best selling-point of creating filmed live performance: the ability to edit, reshoot, and edit different takes together results in what looks like a flawless performance.Members of the original cast, including Jeremy Jordan as Jack Kelly, Kara Lindsay as Katherine, Ben Fankhauser as Davey, and Andrew Keenan-Bolger as Crutchie returned to their roles, but it helps that the whole cast of this show gave a wonderful rendition of the Newsies musical. Seeing it all put together as a film is a great testament to how excellent this musical is.

The crowd’s cheering, laughing, and clapping did not take away from the performance – in fact the crowd was rarely included in the shots except at major points in the movie. Shots of the crowd were, in fact, used to the movie’s advantage – when Miss Medda Larkson performs her song the camera shows a shot of her singing to crowd who, then, become a part of the movie. While having a live audience might be disruptive for other films, this performance was not distracted by the crowd. 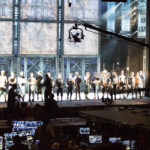 What didn’t work in “Newsies: The Broadway Musical”

While we were watching the screening we joked about having an intermission after Jack’s “Santa Fe,” not really believing that a movie would ever have an intermission. We were wrong – in the middle of this film is a real 15-minute pause, just like the live performance. This may have been included to give viewers a taste of what it’s like to watch the show live, but the effect is lost in the fact that the show is a movie, not a performance. While in a live show actors need to rest and audiences need breaks, such things are not needed in a film.

The intermission includes a timer and a set of behind-the-scenes photos and short trivia, but these additions are little help for those who want to simply move on with the show. If the movie goes to streaming services like Netflix or Hulu audiences can simply skip over the intermission, but it is permanent for those who choose to see the movie in theaters.

The addition of the intermission, while unneeded, doesn’t take away from the rest of the film, but may vex those who are less patient or more ready to move on in the story. 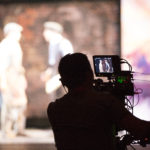 Technically, no; “Newsies Live” is much closer to the stage production than it is to the original film. This movie, in fact, takes almost all the benefits of film and applies them to remedy the disadvantages of live production, giving “Newsies Live” the best of both worlds.

The intermission is the one step back into these disadvantages, and was unnecessary for a filmed production. Still, a fifteen minute wait for a good movie, especially if you already like “Newsies,” isn’t all that bad.

You can judge the film for yourself in select theaters February 16, 18, and 22, in Canada on February 19 and 23, and around the world on February 19-28. Get your tickets for “Newsies: The Broadway Musical” online now!