Peter Pan is a pretty well-known character. First seen in the early 1900’s, Peter was created by none other than J.M. Barrie, a Scottish novelist and playwright who was inspired by a group of boys known as the Llewelyn Davies boys, whose entire family Barrie became close with. From there Peter Pan has grown into a powerful cultural force and has often been seen in movies: notably in the animated film Disney created in 1953 and the film “Finding Neverland” in 2004.

Peter Pan’s huge, complicated background all comes together under a stage play now being performed at the Segerstrom theater in Southern California. Adapted from the movie of the same name, “Finding Neverland,” traces the origin of Peter Pan by giving us a partially fictional and partially real perspective on Barrie’s relationship with the Llewelyn Davies family.

Unlike previous adaptations, however, “Finding Neverland” is special because it is a live musical – and this lends itself very, very well to the story of Peter Pan.

Heartbreak and hope in “Finding Neverland” 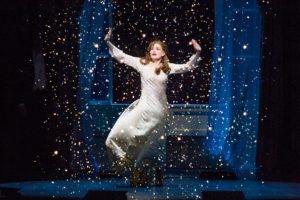 The play’s main focus was not so much Peter Pan himself, but rather his creation and its relationship to the other characters. The story, then, centers on childhood, on living in one’s imagination, and on the challenges that come with growing up.

Though at first it may seem as though Peter Pan and the ideals he stands for seem childish and even irrational, “Finding Neverland” turns the story of Peter Pan into one of hope. The play, in fact, is not about embracing childishness – the play takes this theme further, and demonstrates how innocence and hope can prevail even in the face of fear and sadness.

“Finding Neverland” at the Segerstrom 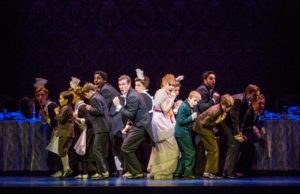 of the play reflects these themes beautifully.

This is thanks in part to the amazing acting done by the cast, which includes both adults, children, and even a dog, all of whom play their parts and sing their lines in absolutely captivating ways. Billy Harrigan Tighe (Barrie) and Ben Kreiger (Peter Llewelyn Davies) stood out as incredible actors and singers, but it was truly admirable to see that every cast member, even those with less major roles, were able to let their personalities shine through. 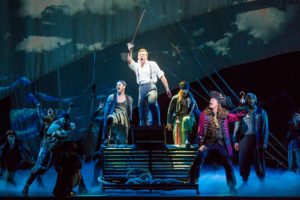 Most notable, however, is the visual design of the play. From creative set design to complex choreography, it’s obvious that effort was made to ensure the visual aspect of the play reflected its themes of imagination.

This is a play that simply cannot be listened to on a soundtrack – while the songs are good, seeing the characters move throughout their places on stage and interact with lights, shadows, props, projections, and even glitter bring this show to the next level. 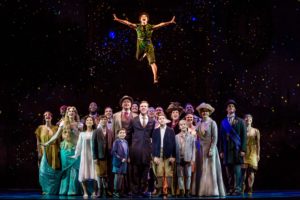 With tickets starting at just $29, it makes little sense to miss this play. It has good writing, a good cast, and wonderful visuals – it’s a fun play overall, and will definitely make it to many favorites lists.

Catch “Finding Neverland” at the Segerstrom Center for the Arts from now until April 2nd, or check out the complete list of tour dates online.

These shows were viewed without charge courtesy of The Segerstrom Center for the Arts in exchange for an honest review.