I’m sure you’ve heard Lauren Tom even if you’ve never heard of her name. This Asian-American actress has been in an incredible number of T.V. shows, playing popular characters like Amy Wong in “Futurama,” Numbah 3 in “Codename Kids Next Door,” and Mrs. Linda Tran in “Supernatural” (seriously, look at her credits – they’re incredible.) In conversation Lauren Tom is just as amazing as her credits – her down-to-earth humor betrays her wisdom as an experienced actress.

I was able to interview Lauren Tom about one of her latest roles – Celia in the new series “Andi Mack,” which is already making waves as a new kind of Disney Channel show, according to a The New York Times. As a children’s show veteran and a mother, Tom was eager to answer some of my burning questions about this new series. 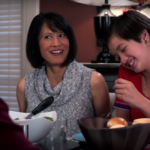 “everyone had a perfect family…I

just could not relate”

I opened, of course, by telling Tom about my surprise at the first episode – it’s certainly unlike any other Disney Channel show I’ve seen.

Tom agreed that the show is, indeed, different, saying: “I think it’s groundbreaking in the sense that it’s really striving to represent what kids are going through today.”

She described how the shows she watched growing up displayed pristine personal relationships: “everyone had a perfect family, the children were perfect, the parents were just sweet as could be, and everyone was white. I just could not relate whatsoever, and so I really take my hat off to Disney for keeping up with the times and changing with the times, because I think that’s how we’re going to keep an audience – when they feel like they can really relate to the characters and see themselves up on screen.” 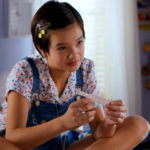 ANDI MACK – “Tomorrow Starts Today” – Andi’s family life is thrown for a loop when her big sister, the freewheeling Bex, returns home on the eve of her 13th birthday. It begins with Bex arranging for Andi to train for Ultimate Frisbee with the cutest guy at school, Jonah Beck, who she learns has a high school age girlfriend, Amber.Ê Andi also grapples with telling her best friends Buffy and Cyrus some big news, but is preoccupied making Jonah Beck a bracelet, at his request.Ê Meanwhile, Cyrus becomes the Space Otters’ official Enthusiastic Supporter, helps them win their first game. This episode of ÒAndi MackÓ airs Friday, April 07 (8:30 Ð 9:30 P.M. EDT) on Disney Channel. (Disney Channel) PEYTON ELIZABETH LEE

Of course I was curious about the future of the show and questioned whether or not it would be as dramatic as the first episodes.

“It can be, it definitely has pockets of drama in it for sure, but there are a lot of moments and whole episodes that are a lot lighter in tone,” she assured me, explaining that much of the conflict involves Celia, a maternal character – taking a different perspective on parenting compared to other children’s shows. She emphasized the way the show embraces pain because it makes the story real: “we all go through a lot of pain as well as joy in our lives, and so I think that it’s important first to have that piece in there as well, and that’s what sets us apart too.”

Pain, of course, is not a typical children’s show topic, so I asked Tom her opinions on who the target audience for “Andi Mack” might be. “Honestly,” she said, I “think anybody would, because the adults who have seen it, you know, have really been engaged by the characters.” She recounted how Andi faces the same type of troubles she faces as an adult, and spoke on how she appreciates the show’s willingness to tackle issues faced by all ages. 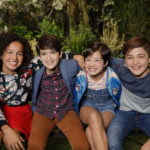 “this is a slice of American life”

The conversation then turned to diversity – an idea that “Andi Mack” embraces but, as of the first two episodes, never explicitly mentions.

I asked Tom whether or not this was deliberate, and she explained, “I don’t think being asian American is really discussed in the show, and I think that is refreshing and a beautiful part of the show – that it’s not an issue, and it’s not mentioned, and I don’t think it should be. Because again, this is a slice of American life, and there are millions of Asian Americans out there who really haven’t been represented. So I love the fact that we haven’t really dealt with anything dealing with that specifically. I think that’s a great step forward.”

Our conversation then turned to the intended audience of the show – children. As a seasoned veteran of children’s T.V., Tom explained how children today are good at detecting realism and fakeness in entertainment, meaning shows have to be more “real” than before. “The writing reflects really more how things are in life,” she said, “and I think that the kids are going to respond to that and feel great about not being talked down to.” 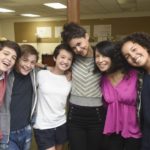 Her hopes for the show are that this writing creates a sense of belonging and relatability for viewers, no matter how young they may be.

Fandom was brought up, and Tom was ecstatic at how these entertainment-loving groups were able to create relationships for many seeking community. She spoke particularly about the fandom of  “Supernatural,” which she became familiar with after her role on the show: “they really bond together, they’re so loyal, they help each other, they fundraise for each other, and these are all the things that we want our kids to feel, to be connected and to help one another, and so I’m having the same hope for this show, but for a younger crowd. It’s never too early to start feeling as if you belong somewhere, and that you’re trying to do the right thing.”

Lauren Tom’s wisdom and joy at being a part of “Andi Mack” only made me more excited to see where the show will go from here.

“Andi Mack” officially premieres on Disney Channel this Friday, April 7th. Check it out to see how Tom and the rest of the cast and crew are creating a new type of Disney Channel show that, perhaps, may grow its own young fandom one day.

Special thanks to Disney Channel and Lauren Tom for granting us the opportunity to speak about “Andi Mack” in an interview!