Earlier today in New York City, ABC held their annual Upfront presentation. These presentations are what all TV networks do every year to lure advertisers and their money to financially support the productions themselves. To help do that, networks take the opportunity to put on a spectacle that includes what new shows they are planning for the upcoming year.

ABC’s Upfront was no exception, with the announcements of returning and new shows. Renewed shows included the network’s “tentpole” series ranging from the existing “Dancing with the Stars” to the new hit “Designated Survivor.” Daytime TV programs that got another season were “The Chew” and “Live with Kelly and Ryan (Seacrest).”

As for new shows, they all were met with an overall positive reaction from advertisers in the audience, likely due to how ethnically and topically diverse the new and existing shows are.

Among the new series was “The Mayor,” a music-driven comedy produced by Broadway’s “Hamilton” star Daveed Diggs, a new thriller about Millennial lawyers from Shonda Rhimes called “For The People,” and a comedy written and starring Zach Braff (“Scrubs”) called “Alex, Inc.” which tells the story of his character’s quest for creating a hit podcast.

ABC also took the time to confirm news that came before the presentation like verifying that Katy Perry would be a new judge on the rebooted “American Idol”, as well as confirming the revival of the late 80s comedy “Roseanne.”

The show closed out with the announcement of all the live shows that will also air on the network in the next year, including a new reality singing competition called “Boy Band” where judges that include “Backstreet Boys” member Nick Carter seek to find the next, well, boy band sensation. And in a surprise performance, all of the Backstreet Boys ended up on stage to once again let the world know that They. Were. Back.

In some way, it was a fitting way for ABC to end its Upfront presentation. It has been a few years since ABC could find its stride and place among the other networks which seemed to have lured eyes to their shows. That is beginning to change, especially with ABC’s new entertainment programming chief Channing Dungey who played master of ceremonies at the presentation.

“We’re making shows that will continue to define moments,” she said announcing the theme of this year’s Upfront event. “That means we’re going to continue to make shows that reflect the world around us. That’s ABC.”

Here’s a good summary of the new and returning shows, as well as the primetime lineup for the 2017-18 season:

New Series ‘Alex, Inc.,’ ‘The Crossing,’ ‘Deception,’ ‘For The People,’ ‘The Good Doctor,’ ‘The Gospel of Kevin,’ ‘The Mayor’ and ‘Splitting Up Together’ Will Join the Lineup
Fan Favorites ‘America’s Funniest Home Videos,’ ‘American Housewife,’ ‘The Bachelor,’ ‘The Bachelorette,’ ‘black-ish,’ ‘Dancing with the Stars,’ ‘Designated Survivor,’ ‘Fresh Off the Boat,’ ‘The Goldbergs,’  ‘Marvel’s Agents of S.H.I.E.L.D.,’ ‘Modern Family,’ ‘Once Upon a Time,’ ‘Quantico,’ ‘Shark Tank,’ ‘Speechless’ and ‘To Tell the Truth’ to Return
New and Returning Shows Join Previously Announced ‘American Idol,’
‘Marvel’s Inhumans,’ ‘The Middle,’ ‘Ten Days in The Valley’ and the TGIT Lineup
Two Live Musical Event Specials, ‘The Wonderful World of Disney: The Little Mermaid Live!’  and ‘Rolling Stone 50,’  Along With New Alternative Series ‘The Bachelor Winter Games,’ ‘Dancing with the Stars Junior’ Also Announced for 2017-2018 Season 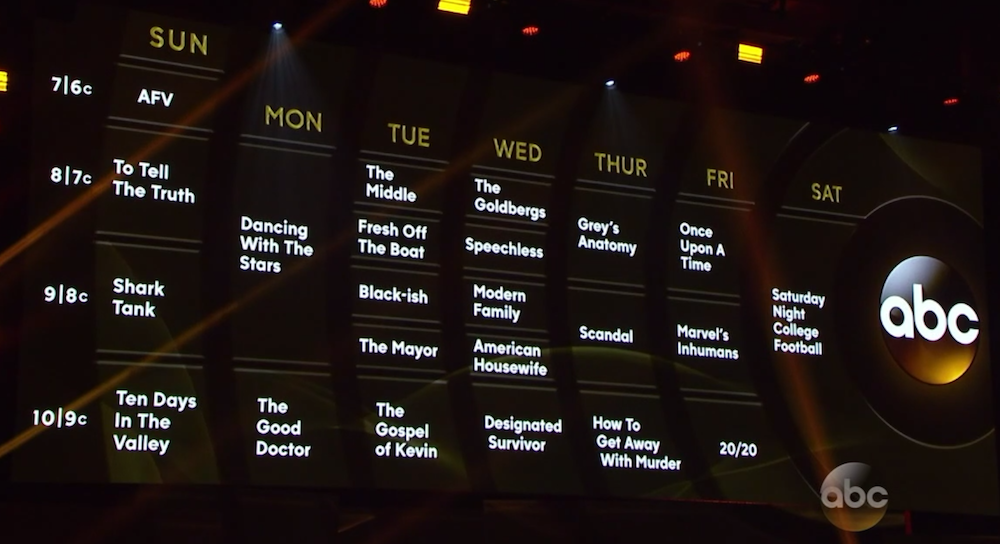