One of the more visually stunning scene in Disney’s live-action “Beauty and the Beast” is arguably the one trying to re-create the iconic ‘Be Our Guest’ scene from the animated film. As it turns out, it was an equally stunning process that brought about the largest challenge for filmmakers.

“It was the biggest challenge of our movie,” said director Bill Condon. “So much of it was virtual that anything that could be real I wanted to make sure was real.”

The whole scene was a combination of live-action camera shots and very intensely technical computer graphic animations. For Emma Watson (Belle), that meant a whole lot of just sitting, staring, and a vivid imagination. “It was literally me sitting at an empty table looking at nothing. It was the most boring scene I ever had,” she said laughingly.

Her small tasks all had purpose, however, with much of the success of the scene coming from behind-the-scenes. For the actual live shoot, Condon worked with his director of photography to plan all the shots and angles of the scene.

With the angles decided, it was then programmed to a smart camera crane that could film the scene with precision over multiple takes. Condon later worked with his graphic artists to figure out what items and animations needed to be filled in like the flying plates and dinner host Lumiere, of course. 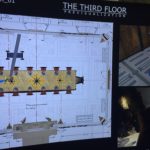 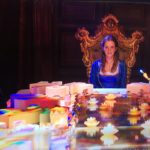 All of it had to come together seamlessly in order for it to be fantastical and fun like the animated scene was.”There are well over 100 different characters and other digital elements in the scene doing something to put on the show,” said co-producer Steve Gaub. “It was all quite layered and very tedious, but we got it down!”

In total, the ‘Be Our Guest’ scene took a little over 2 years to complete. That breaks down to 6 months to plan, 1 month to shoot, and 15 months to incorporate all the CGI elements for the scene to be completed. And it was all not finalized until close to the film’s debut.

“We were really tweaking things up until the final weeks before the theatrical release,” said Condon.

You can see and learn more of the making-of the film and some fantastic bonus features on the Blu-ray and Digital HD copies of “Beauty and the Beast” now available.