Editor’s Note: This story is by Camille Wall, a friend and long-time contributor. Read her behind-the-scenes story of the making of “Cars 3” HERE.

The most recent Pixar short “Lou” runs prior to feature film “Cars 3.” The animated short shares the six-minute animated story of a toy-stealing bully, showing how his heart evolves on-screen. At the “Cars 3” press junket, we spent some time hearing from director David Mullins and producer Dana Murphy about the process of turning a pitch into a film, along with some fun tidbits on the making of “Lou.” 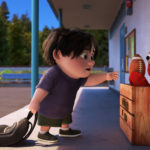 What does LOU stand for?

Lou is a spunky-spirited creature compiled of a pile of toys, a red hoodie, and baseballs for eyes; his name is created by the missing letters “L-O-U” from the “Lost and Found” box. Lou enjoys seeing the kids on the playground reunited with their lost possessions. Lou has watched the antagonist, a boy named JJ, steal other kids’ toys for attention. In an effort to get JJ to return the stolen items and missing toys, he shows JJ something that he once lost that was very special to him.

The story flows well, invoking with a range of emotions – from laughter, frustration, sadness, and tears of joy – which connect the audience to the heart of JJ’s development. This is by far one of my favorite Pixar-animated short films, even more after hearing the inspiration and backstory. 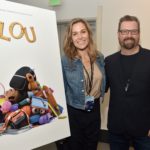 Who does LOU stand for?

Over the course of his Pixar career, Mullins pitched numerous short film ideas: some included mermaids and pirates, a beaver family, and even cars, but none stuck. It took eight years and many ideas before Mullins was able to land a pitch that would eventually become “Lou.”

There is an immense amount of work that goes into a feature animated film, and the same process applies to a short film. Once they had the concept for the character Lou, Mullins’ wife, a stop motion animator, helped him construct a life-like Lou for the pitch. Everyone loved the idea, and they began the process of writing. Finalizing a concept and getting the pitch approved is just the beginning because, as Mullins shared with us, the story always evolves and changes.The original title for the film was “Lost and Found,” but due to other property with the same name, it was shortened to “Lou,” which happened to work out best in the end.

One of the most interesting things that I learned was how Pixar recycles characters from previous films for new ones. Most short films have very few characters, but since “Lou” takes place on a playground, there were a lot of children to account for! If you look closely, you’ll find that many of the children were also in “Finding Dory” and “Inside Out.” 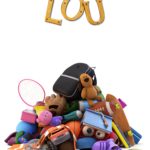 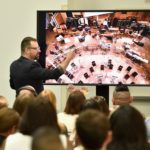 The character JJ originally began as a cross between Scut Farkus of “The Christmas Story” and Tim, John Connor’s friend from “Terminator 2.” Eventually, they settled on Jonah from “Crazy Stupid Love,” as they wanted the audience to feel for the character by the end; in early concepts, he started out a little too mean. Overall, they ended up reworking a character from “Inside Out” and the result was JJ. They wanted him to be tough as nails, but could easily fall apart.

So what’s the inspiration? Mullins shared his childhood memories and experiences growing up and moving often. He was always the new kid, and at times felt invisible. The story tells the tale of a kid that was in search of attention, and we realize that at times those who hurt are the ones hurting the most. It will resonate with audiences of all ages, from kids to adults, as we are drawn into the story through various emotions and a relatable storyline.

“Lou” is a wonderful segue way into “Cars 3,” as it prepares us to experience great stories with characters that evolve from the heart. “Lou” reminds me that even the “meanest” people need to be loved and reminded of the good things that they might have lost along their journey.

Some other fun facts about LOU:

You can see “Lou” in front of “Cars 3” today in theaters.