Shanghai Disney Resort recently announced that they will be hosting a Halloween celebration this month. Similar to the Halloween overlays that currently takeover Disney’s US-based resorts in California and Florida, the Chinese Disney resort will feature new entertainment and experiences that will make for a “family-friendly spooky” time.

?? A look at the first Disneytown Halloween Carnival at Shanghai Disney Resort (photos by etmtravel on Instagram) pic.twitter.com/eMTE5jUZJL

Jack-O-Lanterns, spider webs, and fall-colored foliage, and other theme-specific decor will line walkways and paths in each of the lands. The new Villians’ Cavalcade will feature Disney’s most scary-but-beloved characters once the sun sets. There will even be “ghost pirates” roaming around in Treasure Cove. Additionally, spooky-but-tasteful seasonal foods like a “Black Magic” cheeseburger (with black bun) will be available to much, along with candies and other sweets. Don’t forget about the exclusive Halloween Shanghai Disney Resort-branded merch on your way out!

Disneytown, Shanghai’s version of Downtown Disney/Disney Springs, will also get in on the celebration with decor and special offerings from the vendors that are there.

I think the most unique aspect of the celebration, however, is the invite for guests to come to the resort dressed up in their own Halloween attire. “…for the first time ever, Shanghai Disneyland is putting a limited-time exemption on its attire regulations and is welcoming guests of all ages to dress up as any character they like during the Halloween festival period,” the announcement said. It went on to say that there will be guidelines to follow that will be made accessible on their website and app.

It’s interesting to note that this costume policy isn’t common to any Disney Park. In fact, costumes are prohibited from being worn at Disneyland Resort and Walt Disney World Resorts unless it is for one of their popular ticketed Halloween parties due to safety and to prohibit confusion from guests who might think other guests work at the park.

The announcement cited the reason for allowing costumes during the Halloween celebration period of September 25 to October 31 as an effort “…to let guest immerse themselves in the Halloween atmosphere and really join the party.” But will they really do so? According to some, yes, since China does somewhat celebrate the fall season with aspects of the western Halloween traditions. 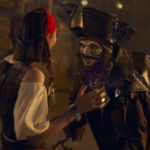 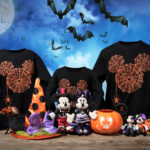 For one, China is not known to celebrate western traditions, but they do celebrate their own celebrations that may contain western influences. While they do have holidays that celebrate the dead, Jack-O-Lanterns and ghost pirates aren’t typically included in them. These things are being presented in the context of a Disney theme park, however, and since many Chinese guests to the resort are already expecting a Disney and in turn a “western theme park” experience, the reception might be more positive than one might think.

This technically isn’t the first time that Shanghai Disney Resort has put on a Halloween celebration. Last year, park management had Halloween decorations installed in and around Disneytown, along with activities like face painting and trick-or-treating for guests. According to sources familiar with the event, it was received very well by the several hundreds that were in attendance during the October 31, 2016 weekend, much of whom were from mainland China and the immediate Shanghai area. That positive reception is a major reason why the resort-wide celebration is happening this year.

But as with all their special offerings, Shanghai Disney Resort management will continue to monitor important metrics like guest surveys to see how they will proceed with future seasonal celebrations.