Today, our friend Alex Marzoña from Marzona’s Musings gives us an insider’s look at the the latest Marvel film “Thor: Ragnarok”. Learn more about the film and the way it presents both old and new characters as Alex muses on the ups and downs of the movie.

The last time we saw Thor in “Avengers: Age of Ultron” (2015), the God of Thunder had visions of a dying Asgard, leading him to journey home to prevent Ragnarok. Drenched in vibrant colors and scored with an 80’s hair metal tinge, “Thor: Ragnarok” has no problem keeping the laughs and fun rolling along due to a well-rounded cast and a great comedic mind behind the camera. New Zealander director Taika Waititi, fresh off the critical acclaim of one of my favorite films of last year, “The Hunt for the Wilderpeople”, gets to play in the Marvel sandbox and bring his sensibilities to Thor’s world. The end result is an almost perfect compromise of Waititi’s direction and MCU’s universe building.

The 17th(!) film in the Marvel Cinematic Universe and Thor’s 3rd solo adventure nails the character of Thor throughout. Chris Hemsworth gets to flex his muscles dramatically, as the weight of events in previous films accentuates his decisions here. After escaping from the fire demon Surtur, Thor makes it back to Asgard to discover that Loki (played by the always excellent Tom Hiddleston) has been posing as Odin, their father, since Thor left for Earth. (Cue one of my favorite and most unexpected Marvel cameos). After a quick jaunt to Midgard and the Sanctum Sanctorum where they meet Doctor Strange, Hela, the Goddess of Death, emerges to destroy Mjölnir and banish Thor and Loki to another world. They end up on Sakaar, a battle world run by The Grandmaster (played by an always eccentric and interesting Jeff Goldblum), where Valkyrie (Tessa Thompson) captures Thor and brings him to the gladiatorial ring. eanwhile, Hela conquers Asgard, but must overcome rebellious Asgardian forces, led by Idris Elba’s Heimdall.

It’s never a bad thing to have this many legendary actors in one movie, and they all bring their A game. Cate Blanchett is deliciously malicious as a villainess, as she conscripts Skurge (Karl Urban) into her army. But in classic Marvel storytelling, the deeper themes and consequences of Hela’s existence don’t get to be explored. Strengthened by a faceless CGI army, it’s hard to put her into the conversation as one of the better Marvel villains. Karl Urban does great work as Skurge, as he gets to grapple with the fear Hela unleashes upon his life in one of the better character arcs overall, even though it unfortunately culminates in an unsettling real-life parallel.

It’s all fun and gladiatorial games

back on Sakaar, where the Hulk (Mark Ruffalo) has been fighting his way to become the Champion since the events of “Age of Ultron”. (Keep an eye out during the tower shots of previous champions for cool Marvel character cameos!) The comedic side of the movie gets to really shine on this planet, where quirky, situational humor mixes exceptionally well with punches and touching character moments. Valkyrie quickly becomes a standout character, leading one to imagine how amazingly emotional and magnificent a solo film featuring Thompson could be. 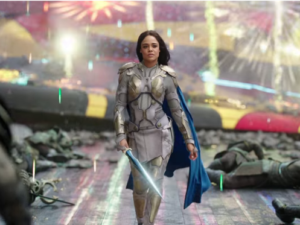 With extremely triumphant, thrilling needle drops and a high laugh-per-minute ratio, “Thor: Ragnarok: is a great entry into the ever-expanding Marvel Cinematic Universe. Emotional beats that play out actually seem permanent and are not borne out of a need to move the universe forward. There are a lot developments packed into the running time, but Waititi has a great handle on the pacing, letting poignant scenes breathe and wham-bam action burst from the screen.

It is a little disappointing to not rank Hela in the top MCU villains and not see darker themes explored to make this unique Marvel movie so much more distinct and bold. However, none of that took away from the overall enjoyment of a wild, colorful roller coaster ride of a movie with one of the best ensembles around. Nothing is more exciting than being excited for a character who has finally found their footing and purpose in this universe.

RATING: BEST OF THE BEST

(Refer to my rating system HERE!)