A few weeks ago, I traveled a few hours east of Los Angeles, California to San Bernardino. The inland county and city is home to many small businesses ranging in size from family farms to Amazon.com.

We weren’t there to visit either of those businesses, but one that had to be the most unique in the entire area. Tucked away from any of the major roads is a two-story building and warehouse that looked like the others around it. Inside, however, was filled with heads, skins, and skeletons.

No, they weren’t real. They were entirely artificial, but you’d have a hard time guessing that if you didn’t look closely enough. They are commonly known as “Animatronic” figures and the man behind them has been creating these lifelike creations for 40 years.

“I started building and tinkering in my parent’s garage when I was a kid,” said Garner Holt. “I knew from that point forward that this is what I wanted to do for the rest of my life.”

Holt, a life-long resident of San Bernardino, quickly went to work and perfected his creations with his close friends over the years. His work quickly made the rounds with clients singing his praises which kept bringing the work in a cyclical fashion. He eventually secured major clients like Disney and Chuck-E-Cheese to create their Animatronic figures. With business booming, he opened up his production facility which sits just a few miles away from his parent’s garage where he started it all.

While we were touring what Garner likes to call his “playground,” I quickly saw why. The entrance of the building is filled with pictures from his past projects. Many of them were Disney-related, and even a Sally from “Nightmare Before Christmas” greeting visitors as they walk in further.

“Disney has been generous to us,” Holt said. “They are demanding when it comes to detail and functionality, but they have the money and some patience, so we get it done and they like that.”

They like Holt and his team’s work so much that they have created over 400 Animatronic figures that have been installed in Disney’s parks around the world. According to Holt, his favorite install would be the Animatronic figures he did for the Radiator Springs Racers attraction in Cars Land at Disney California Adventure park. “John Lasseter wanted it for all the cars to look like they popped off the screen and landed in front of you. It was challenging and expensive, but like always, we got it done!,” he said.

As we visited the other parts of the facility like the place where they “cured” and colored the figure’s skins and saw the steel mill that formed the parts for their skeletons, I couldn’t help but focus on what Holt kept saying about his figures: they are expensive and required a lot of time to produce.

While Holt didn’t go into specifics on pricing and timing, he did emphasize that creating his figures aren’t an easy thing to do. “You’re basically re-creating life in every form: movements, looks, and sounds,” he said. “It’s true that you can make these at any budget and timeline, but to make it believable, you can’t cut corners.” 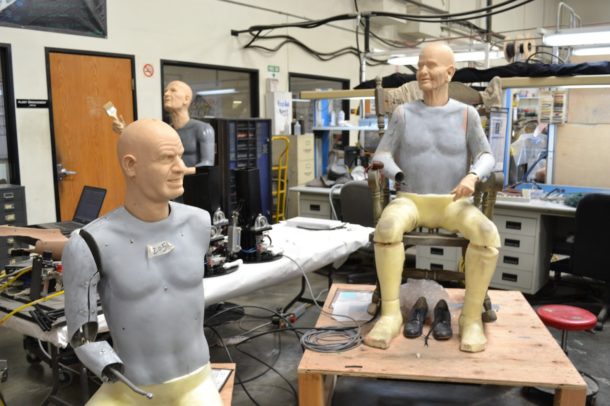 What you’ll see in Garner Holt’s factory (via MiceChat)

The reality is that many entertainment companies are “cutting corners” for their offerings. Universal Studios parks are known by theme park fans as home of the “3D glasses rides” since many of their rides require riders to wear 3D glasses in order to enjoy them. In effect, the believability of 3D attractions rely on the 3D effect itself that’s put on a screen.

Holt admitted that he is mostly blind in his left eye and therefore can’t see the 3D effects in rides. He said, “I’m sure it’s great, but it doesn’t cut it for me even if I could see it.”

When asked about if virtual reality would be a equitable competitor in the themed entertainment business, he responded similarly. “Would I rather be at the end of a robot with [a] virtual reality headset feeling like I’m on a roller coaster or feel the wind hit my face as I go on a real roller coaster?” He continued, “I may be old-school, but if you picked the virtual option, I’d say ‘Really? Is that fulfilling enough for you?’.”

Holt really feels that being fulfilled with your entertainment choice comes down to that factor of believability. “That can only really happen with real things.”

The last stop on our tour was a visit to an unmarked room where his team’s latest creation was being videotaped. You, too, might have seen the video of it on YouTube that quickly went viral earlier this year.

Holt is calling it an Animatronic Lincoln Expressive Humanoid Robot Head, touting that it is the “most advanced humanoid robotic head ever created.” Seeing the video might get you second guessing if this really was Abraham Lincoln brought back from the dead, but it doesn’t compare seeing it in person like I did.

As the team demoed his emotions with a press of a button, you couldn’t help but blink twice and scratch your eyes as he raised his eyebrows, moved his lips, and turned his head. “Hello, I’m Abraham Lincoln and I’d like to welcome you to Garner Holt Productions,” he said unexpectedly.

In my eyes, he really was Abraham Lincoln come back to life. Everything about his mannerisms heightened the believability factor by a million. Add the real human hair that Garner uses for all his Animatronic human figures and the custom, hand-painted epidermis, some clothes and you had a real human talking back to you.

I had about 20 minutes to gawk at Lincoln and that was more than a generous amount of time to look at Garner’s work. The reality is that most of Garner’s work goes unnoticed since you’re more than likely driving right by them for a few seconds like in the Radiator Springs Racers attraction in Cars Land. But to Garner, those few seconds of awe means everything.

“Our figures aren’t meant to be the star of the show,” he said. “But when they are visible and on-stage, they better play their parts perfectly.”

That isn’t always the case, however, since most Animatronic figures are very complex pieces of technology that has to go awry sometimes. But the work coming out of Garner’s warehouse are as reliable as they come. With thousands of cycles and years of doing the same actions over and over again, they often play their parts so well that you are in awe when you see them.

“We did our jobs when you don’t think of our figures as fake or real,” Garner said as we found our way to the exit, passing more and more of Garner’s past figures (since ‘retired’). “If you’re willing to spend hundreds of dollars a person to watch a screen at a theme park, you might as well stay home.”

He continued, “But for those of us who want our money’s worth, we need to care and put in the extra effort. It’s that extra that makes a kid, a parent, and a grandparent believe what they see. And smile.”

Our special thanks to Garner Holt and his staff for caring for us during our visit! You can read more about the company by visiting their official website.