Making a musical isn’t easy. While many Disney movies are already musicals in film, translating story and character development alongside music can be a challenge. Disney takes this challenge up again in their latest run of Aladdin as a stage play.

The first official stage production ran in 2011, but since then Aladdin hasn’t been seen in American theaters – until now. The 2017 production of Aladdin is currently touring North America, visiting cities across the United States. This new production gives us the opportunity to take a closer look at how the Aladdin (2017) stage production adapts the animated film, as well as how it differs completely. 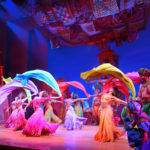 A big factor in the success of Aladdin (1992) as a cartoon movie was its willingness to be silly. Unlike other Disney renaissance movies like The Hunchback of Notre Dame, Tarzan, and Pocahontas, Aladdin (1992) falls on the lighter side of classic Disney movies, thanks to Genie’s anachronistic pop-culture references, Iago and Abu’s antics, and the Sultan’s naiveté. The Aladdin stage play is no different, embracing the humor and wackiness inherent in the film. Townspeople dance, Aladdin (Adam Jacobs) and Jasmine (Courtney Reed) crack jokes, and of course Genie (Michael James Scott) spices up every scene with laugh-out-loud humor. Even Jafar (Jonathan Weir) is cracking jokes in this version of the story.

This level of humor can be jarring at first – after all, Aladdin is not without its dark moments. It’s this silliness, however, that gives Aladdin (2017) on stage an obvious turn towards younger audiences. I came in expecting the show to be a little darker – perhaps after my experience watching the Hunchback of Notre Dame stage play – but this version of Aladdin was, instead, very light, perhaps even lighter than its animated counterpart.

This lightness is reflected in the design of the performance. Colorful costumes, perspective-bending scenery, and complex magic tricks make the play literally fun to watch. The play is very much like the infamous “Prince Ali” scene – luxurious, dazzling, and constantly in motion. 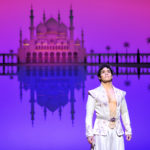 This adaptation of Aladdin (2017) changes elements of the cartoon version’s story. The most drastic change is rooted in a more in-depth exploration of Aladdin’s background. He is given a mother and a motivation to make her proud, as well as 3 new friends named Kassim, Omar and Babkak. These three, who seem to take the place of Abu, are heavily featured in the play, and participate in three long numbers spread throughout the production. Each friend has their own distinct personality, and serve more as comedic relief than to move the plot forward, though they do have a fun “adventure” number together. Alongside new and old friends, Aladdin’s journey to accept his true identity stays a major point in the story.

Jasmine is also granted extended character development – she holds lengthy conversations with a few girlfriends of her own and is given a whole song before she even meets Aladdin. Additionally, the meeting itself happens over the course of a musical number rather than within a few glances at the market place. The expansion of Aladdin and Jasmine’s backgrounds takes time, making the ending of the stage play much faster than in the animated Aladdin (1992). Though it’s longer than its cartoon counterpart, Aladdin (2017) focuses heavily on the relationships formed early in the story, rather than on resolutions in the end. 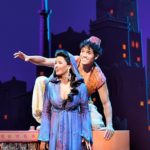 Aladdin (2017) is fun – seeing the color, the dances, and the literal magic tricks used in real life was enchanting, and can make you feel as though you’re really in Agrabah. Though those who have a nostalgic connection to the cartoon movie might regret the changes made to the plot, this version of the story does uncover character development and backstory that isn’t normally revealed. Its magic lies in the way it extends the story, captures our attention with dazzling visuals, and makes us laugh at new jokes. Ultimately, Aladdin (2017) is a great watch for kids and for adults who want to see a different perspective on Aladdin, Jasmine, and the story of the magic lamp.

Aladdin (2017) will be playing at the Hollywood Pantages Theatre in Los Angeles, CA from now until March 31st and will continue on its North American tour following. Check out the official schedule to find out when it’s coming to a theatre near you!