Storm Reid is Meg Murry in Disney’s A WRINKLE IN TIME, an epic adventure based on Madeleine L’Engle’s timeless classis.

A Wrinkle in Time (2018) is not a direct, page-to-scene adaptation of the source novel written by Madeline L’Engle. This new movie version diverges from the book in many ways, cutting and adding characters and scenes (as adaptations often do).

A Wrinkle in Time (2018) is best seen not as a direct copy, but as an adaptation of a reading of the moral lessons in the original A Wrinkle in Time (1962). The novel contains many important lessons on morality and worldview, but the film specifically positions itself as a reading of the novel’s feminist themes. The novel is undoubtedly feminist: L’Engle herself noted that the book’s difficulty to publish was because it “had a female protagonist in a science fiction book, and that wasn’t done” at the time. The novel’s emphasis on female power transfers nicely onto screen through a few story changes and, of course, a great (and powerful) cast, with many women such as Storm Reid, Oprah Winfrey, Reese Witherspoon, Mindy Kaling, and Gugu Mbatha-Raw in starring roles. 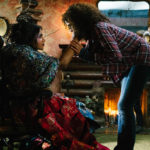 Mindy Kaling is Mrs. Who and Storm Reid is Meg Murry in Disney’s A WRINKLE IN TIME. 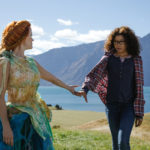 Reese Witherspoon is Mrs. Whatsit and Storm Reid is Meg Murry in Disney’s A WRINKLE IN TIME. 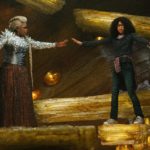 One of the main conflicts in A Wrinkle in Time (both book and movie) is the way Meg (Storm Reid), a young girl and the main protagonist, sees herself. Struggling with self-image and feelings of helplessness, both book and movie Meg must come to terms with who she is, learning how to appreciate her own weaknesses. At the end of both stories, Meg is empowered, confident and restored to her family, at home in her place in the universe.

In the book, this growth comes as a result of receiving love from other people. Meg’s understanding that she is loved makes her realize that her own love is powerful too. She uses this love to defeat IT, a manifestation of pure evil:

That was what she had that IT did not have.

And she had her love for them.”

Love, when shared with others, is a powerful weapon in A Wrinkle in Time (1962). 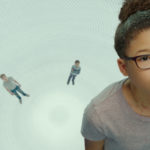 A Wrinkle in Time (2018) brings the focus to Meg herself. Self-love specifically becomes important as Meg not only saves Charles Wallace, but is praised by Mrs Whatsit (Reese Witherspoon), Mrs Who (Mindy Kaling) and Mrs Which (Oprah Winfrey) for becoming a “warrior” of light. In the novel, Meg and the other characters are taken back to Earth by Mrs Whatsit, while in the movie, she is able to create the portal home herself. The movie also features a special, Meg-only scene, dedicated to showing how she travels through time and space, moving towards light, through her own power. The film’s protagonist and its tagline – Be a warrior – shows just how much the movie focuses on female empowerment.

Self-love, then, becomes a powerful weapon in the film. 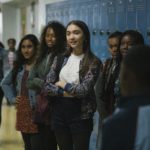 Rowan Blanchard is Veronica in Disney’s A WRINKLE IN TIME.

Other female characters also purposefully get their time in the spotlight. Mrs Whatsit, Mrs Who and Mrs Which are powerful, time and space-bending female creatures who, like in the book, provide Meg with guidance, wisdom and assurance through her journey. Also similar to the novel, the movie presents Meg’s mother Dr. Kate Murry as level-headed and intelligent. The movie also includes a new character named Veronica Riley (Rowan Blanchard) who initially bullies Meg but is later revealed to have her own body-image issues. The humanizing of this character, especially by giving her a struggle common to young girls, provides a broader perspective on the way “evil” can manifest. Veronica and Meg’s almost-friendly waves to each other at the end of the movie, furthermore, give audiences a picture of how compassion and understanding can help improve relationships. 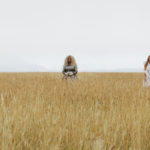 Oprah Winfrey is Mrs. Which, Reese Witherspoon is Mrs. Whatsit and Mindy Kaling is Mrs. Who in Disney’s A WRINKLE IN TIME.

A Wrinkle in Time (1962) was almost never published, due in part to the way it challenged cultural ideologies of the time. Likewise, A Wrinkle in Time (2018) is being released as stronger female presences are seen in media – and while these presences still face challenges, the movie adaptation assures its audience that girls can, indeed, be powerful.

Just as A Wrinkle in Time (1962) was written for children, A Wrinkle in Time (2018) may also be viewed as a movie for children. Like its source novel, the movie gets dark but ultimately has a clear villain, a victorious ending and a moral lesson. Those who want to see the movie for old time’s sake might not find the adaptation as nostalgic as expected, but those who want to see the movie for the way it urges a conversation forward, however, will likely find an interesting thought or two, especially when viewing it with a forward-thinking perspective. A Wrinkle in Time (2018) hints at a future where girls grow up to be confident, self-aware and powerful – and in this way, it’s much like the novel it’s based on.