We’ve come a long way since the first animated feature films. The first ones ever that Walt Disney created with his team of animators were practically inventing the art form, so the processes came as the team thought of ways of capturing life through stories in vivid detail.

Even after 14 previous films, the process that Walt and his “Nine Old Men” developed really hadn’t change when it came to their next hit “Peter Pan.” Released in 1953, the film starred three child actors that Walt also used (per the traditional contracts actresses had back then) to play the Darling children who go off to Neverland with Peter Pan himself. One of them was actress Kathryn Beaumont.

We caught up with Kathryn over the phone recently, now 79, who recalled what it was like to work on “Peter Pan,” as well as Disney historian Mindy Johnson on the significance of the character Wendy in today’s time.

DE: Walk us through what it was like to act/record as Wendy.

KB: It was a two-part process back then.

The first was recording the character’s voices that would be in the movie. The recording room was a large room on the Disney lot (in Burbank). For our voice recording purposes, they would set up a microphones a few feet apart. We shared microphones for each character recording with our scripts in front of us. We’d go through our parts with the director listening in to give us feedback.

MJ: They’d also have the artist’s storyboards surrounding us to give us inspiration.

The second part was a “live-action” section. We’d go onto a soundstage on the lot where we acted out our parts live. The animators and artists would join us to watch us do the movements that would serve as inspiration for movie’s sequences. It was a plain set with simple objects like tables and props we could work with. Altogether, it was a long process taking years. 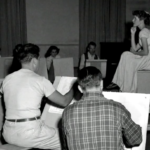 DE: Why do you think Walt Disney chose you for the part?

KB: They needed a traditional British accent, for one (laughs). They really were looking for the right voice and someone that would reflect the character that wanted to portray.

MJ: Walt Disney also loved Kathryn’s voice in particular because it wasn’t too British for American audiences and it wasn’t too American English for British audiences. It would be uncomfortable it leaned any other way, but he wanted authenticity.

DE: What was it like working with Walt Disney personally?

KB: He was a great, kind man to everyone. It was a very special experience to work with him since he was very smart, creative, and knew what he wanted. I was very comfortable around him as a young actress and just as a curious person.

DE: Do you think the character of Wendy has some significance today? If so, why?

KB: It’s an interesting question. When children read stories, they typically read and think of what has happened in the past. For Wendy, a child herself in the story, we meet her right in the middle of that transition between being a child and a young adult. There are a lot of things we can learn in between those times.

MJ: Kathryn’s absolutely right. And I think that’s what keeps “Peter Pan” so timeless after all these years. When we look to our formative times as people, we really see how we develop into the people we will become. It’s something that all people, male or female, young and younger, can learn from and appreciate.

There is much more that Kathryn and Mindy share about “Peter Pan” in bonus features that are part of the new Walt Disney Signature Collection. It’s coming to Digital HD (available May 29) and Blu-ray combo pack (available June 5) in celebration of the 65th anniversary of the film’s release.

Our thanks to Kathryn Beaumont and Mindy Johnson for taking the time to chat with us for this story!